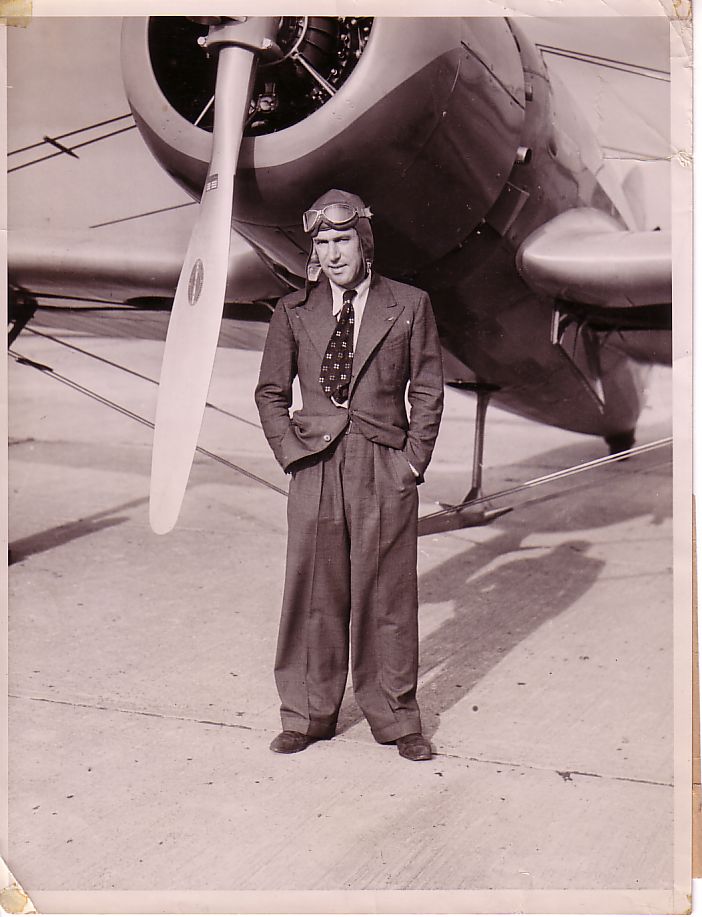 James Allan ("Jim") Mollison ( - ) was a famous Scottish pioneer who set many records during the rapid development of in the 1930s.

Born on in , Mollison was attracted at an early age to flying. Obtaining his (RAF) Short Commission at 18, he was the youngest officer in the service, and upon completion of training, was posted to .

At the age of 22, Mollison became a flying instructor at (CFS), again setting the record for being the youngest in this role. Shortly after, he transferred to the RAF Reserve and devoted his time to civil aviation. In 1928-29, he served as an instructor with the South Australian Aero Club in Adelaide, leaving that position to become a pilot with Eyre Peninsular Airways and Australian National Airways.

Gaining an unenviable reputation as a playboy and , Mollison was a skilled pilot who took to record breaking as a means of "making his name." In July-August 1931, Mollison set a record time of eight days, 19 hours for a flight from to , and in March 1932, a record for flying from England to in four days, 17 hours.

Mollison had flown commercially for Charles Kingsford Smith's ill-fated Australian National Airways. During one of his commercial flights, he met the equally famous aviatrix , whom he proposed to only eight hours after meeting her, and while still in the air. Johnson accepted; they married on July 1932, and she went off to break her husband's England to South Africa record. They were dubbed "The Flying Sweethearts" by the press and public.

Mollison continued his record-breaking attempts and on was the first pilot to perform an East-to-West solo trans-Atlantic flight from , , to Pennfield, , .In February 1933 Mollison flew from England to in three days 13 hours, using as a stop-over continent, a record time and the first solo crossing. By then, he and his wife began to plan a record breaking flight across the world. On , they took off from , but their plane could not make it to in the , crashing before landing there. He and his wife were injured, and the plane broken apart by souvenir seekers.

In October 1934 the Mollisons took part together in . Their Comet "Black Magic" led the competitors off the line and was leading at , but they were forced to retire at after being forced to use non-aviation fuel which damaged their engines.

The Mollisons' marriage became strained. They were rivals for the same aviation records and Mollison was a heavy drinker. They were divorced in 1938. She resumed her maiden name.

Both Amy Johnson and Mollison eventually served in the ATA in the Second World War. Johnson was killed while ferrying an aircraft in 1941. A notable incident occurred when Mollison flew as a co-pilot with . Their Anson was intercepted and shot up by Luftwaffe fighters. Although the aircraft was hit, the 12 passengers and crew were unhurt. On landing, Jim's only concern was "how to get a cup of tea!" [ [http://www.raf.mod.uk/history_old/dianabw2.html Diana Barnato Walker] ]

The 1942 movie "They Flew Alone" (titled "Wings and the Woman" in the United States), was the story of Amy Johnson's life and dealt at some length with her marriage.

Mollison later settled in and ran a . He married Maria Clasina Kamphis on 26 September 1949 at the Maidenhead Registry Office. His drinking was a problem and in 1953, the Civil Aviation Authority Medical Board revoked his flying license. The couple separated but Maria bought the Carisbrooke Hotel in Surbiton for him - a temperance hotel. He died on . Mollison Avenue, Mollison Way and Mollison Drive in Engield, Croydon and Edgware are named after him.Fact|date=August 2008