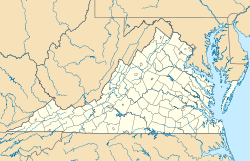 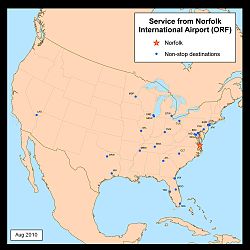 Destinations with direct service from Norfolk.

Norfolk International Airport (IATA: ORF, ICAO: KORF, FAA LID: ORF) is a public airport located three nautical miles (5.5 km) northeast of the central business district of Norfolk[1], a city in Virginia, United States. It is owned by the city of Norfolk and operated by the Norfolk Airport Authority: a bureau under the municipal government. The airport serves the entire Hampton Roads metropolitan area of southeast Virginia (along with Newport News/Williamsburg International Airport in Newport News) as well as northeast North Carolina.

Offering nearly 80 departures daily[2] to major cities throughout the United States, Norfolk International presently is the third-busiest airport in Virginia and is ranked as the country's 66th largest airport in terms of passengers served annually,[3] with over 3.5 million passengers served in 2009.[4] Southwest Airlines, US Airways, Delta Air Lines and American Airlines are the predominant users of the airport.

Norfolk International Airport consists of two passenger concourses: Concourse A (gates A1-A15), and Concourse B (gates B16-B30). Southwest Airlines and US Airways employ Concourse A; all others use Concourse B. The Sky King charter flights are ground-handled by Landmark Aviation.

The crosswind runway's (14-32) was closed for renovations on December 19, 2009, at 12 noon. It reopened in Spring 2011. Eventually however, the airport's long-term plan calls for this runway to be destroyed to make way for a new parallel runway (5R-23L) east of existing runway 5-23.

General aviation services, or fixed based operations, are provided by Landmark Aviation with full-service facilities for maintaining and housing private and corporate aircraft. The modern 54,000-square-foot (5,000 m2) terminal facility offers everything from aircraft rental to sightseeing flights and aircraft repair.

Built in 1995, the FAA Norfolk Air Traffic Control Tower stands 134 feet (41 m) high. Operated and managed by the Federal Aviation Administration, the Norfolk Tower handles approximately 1,100 aircraft per day, 24 hours per day and 365 days per year. Radar coverage is provided by ASR-9 terminal system with a six-level weather detection capability. Also available for use is an Enhanced Target Generator (ETG) lab with two radar scopes to accomplish training objectives, as well as the IDS4 system, a specialized microcomputer network system designed to distribute and display both static and real-time data regarding weather and other rapidly changing critical information to air traffic controllers.

Norfolk International Airport (NIA) houses one of the most modern and efficient air cargo facilities in the state of Virginia. Approximately 70 million pounds of air cargo are presently shipped in and out of the Airport.[when?] All-cargo airlines serve NIA including Airborne Express, FedEx and United Parcel Service, and are supported by a large network of forwarders and customs brokers specializing in air freight. NIA's two modern air cargo terminals provide users with 88,000 square feet (8,200 m2) of space. An adjacent aircraft ramp provides direct access from plane to warehouse. Specific dimensions and additional amenities include:

There are no bus or shuttle services to and from Norfolk International Airport. The nearest bus (HRT Route 15) connection is 1.5 miles (2.4 km) away at the intersection of Military Highway (Route 165) and Norview Avenue (Route 247).[6]

All ground transportation services are located in the arrivals terminal. There are several on-site rental car companies, an authorized shuttle service providing door-to-door service to the entire Hampton Roads area, and taxis available through several companies.

Food, beverage and retail concessions are located throughout the main departures terminal lobby and both airline concourses. New Jersey-based Hudson News manages all airport retail operations; food and beverage operations are managed by HMS Host Corporation. There are several retail shops, restaurants and lounges throughout airport.

A nine-level long-term parking garage, adjacent to the new arrivals terminal, was opened in July 2002 providing over 2,800 parking spaces.

Commercial aviation began in the Norfolk area about 1926, when Norfolk citizens flew commercially for the first time on the Mitten Line, operated by Philadelphia Rapid Transit Air Service, Inc. Norfolk International Airport was established in 1938 when the city-owned Truxton Manor Golf Course was converted to Norfolk Municipal Airport, complete with a 3,500-foot (1,100 m) runway. The first permanent terminal was complete by 1940.

With World War II, Norfolk Municipal Airport became a vital resource to the war effort. The United States Army Air Corps assumed control of airport operations between 1942–1947, extending the runway and adding two more to handle the vastly increased number of flights with larger and larger aircraft. The Norfolk Fighter Wing was established by the AAF in August 1942, providing an air defense umbrella for the Norfolk area's numerous defense facilities. The 52d Fighter Group was stationed at the airport however immediately after the Pearl Harbor attack in December 1941. Various squadrons were assigned to Norfolk Airport during the early years of the war for the air defense mission, the last being the 373d Fighter Group. The air defense mission ended at the end of July 1944.

As the troops returned from the war, the Army Air Corps returned the airport to the city's domain at the end of 1945, and commercial travel took off with two new airlines providing regular flights. In 1948, Piedmont Airlines initiated flights. That same year, ground was broken for a larger, more modern terminal building.

In 1950, responsibility for the airport was turned over to the newly established Norfolk Port and Industrial Authority (NPIA) which could proudly call Norfolk Municipal Airport one of the finest in the nation and one of the busiest. In 1951, the new terminal was officially dedicated.

In the 1960s, the transition from propeller driven aircraft to jets gathered full steam. Norfolk Municipal Airport took on the new demands for longer and stronger runway and taxiway facilities easily, and jetliners here became the rule, not the exception. As a result, in 1968, the airport was officially recognized as the air transportation center for the entire Hampton Roads region, and became known as Norfolk Regional Airport. To prepare for exponential growth over the next three decades, NPIA developed a comprehensive master plan that would move the airport into the 21st century in full stride.

In 1974, the airport dedicated its new, state-of-the-art terminal and additional land was secured for further expansion. In 1976, the airport's name was changed to Norfolk International Airport with the addition of federal customs facilities. New outbuildings housing the fire station, maintenance depot, ATC tower and more were also planned and came on line as needed. However, one of the challenges in expanding was capitalizing on the location of the airport's neighboring Botanical Garden, creating a beautiful buffer zone between the airport and the outside world. Norfolk International Airport, surrounded by year-round beauty, has become a national role model for reconciling expanding air facilities and a delicate ecological sanctuary.

In the 1980s, many changes were taking place. A new general aviation facility opened and a new air cargo terminal was completed for all operations. Parking facilities were also expanded. Even the name of the supervising body changed in 1988 - from Norfolk Port and Industrial Authority to Norfolk Airport Authority.