Aquinas College is a Catholic independent, day and boarding school for boys, located in Salter Point, Western Australia. Its sister school is Santa Maria Ladies College located in Attadale. The college was founded in 1938 as the child-school of Christian Brothers' College (CBC Perth) and is a member of the Public Schools Association and The Independent Primary School Heads of Australia.[4][5]

CBC Perth was founded in 1894, located in the centre of Perth, it was one of the first boarding schools in Western Australia. In 1937, it was decided that a more suitable location was needed to cater for boarding students, Aquinas opened in the following year.

The college is located on a 62.4-hectare (154-acre) campus, with three kilometres (1.9 mi) of water frontage on the Canning River. The campus consists of a high school for Years 7–12 and a junior school for Years 4–6, sporting grounds, and boarding facilities for 210 students.[6] 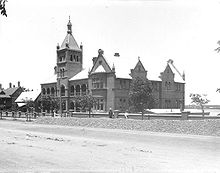 CBC Perth's west and central wings, built in 1895 and 1900 by the Christian Brothers.

The Christian Brothers opened their first school in Western Australia on 31 January 1894 on the corner of St Georges Terrace and Victoria Avenue in Perth, naming it Christian Brothers' College.[7][8]The site had physical limitations and in 1917, headmaster Br. Paul Nunan saw the necessity to acquire much larger property away from the city centre to accommodate the whole school. In 1936, at the instigation of Br. Paul Keaney, the superior of nearby Clontarf Orphanage, 62.4 hectare (154 acre) were purchased from the Manning family at Mount Henry Peninsula on the Canning River at a cost of £9,925.[9][10]

In April 1937 the builders Snooks and Sons successfully tendered for the college building at a cost of ₤21,350. Earlier that year, the work of clearing the grounds and preparing the site was taken up vigorously with squads of boys from the old college playing a major role.[9][11]

In 1937, CBC Perth split; with boarders and some day boys going to the newly established Aquinas College in Salter Point. Day students from CBC stayed at the CBD site until Trinity College was established in 1962. A nearby day and boarding school named St Patrick's College, which was run by CBC Perth closed in 1937, with its boarders and day students moving to Aquinas. The Aquinas College foundation stone was laid on 11 July 1937, and the school opened on 27 February 1938 with 173 boarders and 55 day pupils.[12] The Catholic Archbishop of Perth, Most Rev. Redmond Prendiville, addressed the first Headmaster, Br. C P Foley and students, on the 19 November 1938: "With the proud traditions of St Georges’ Terrace to sustain it, and with the additional advantages of new quarters and ideal surroundings, I have no doubt that Aquinas College will achieve still greater results in the moral and intellectual training of good Catholics and good citizens".[13]

The Front facade of the college, as viewed from Memorial Oval.

The Edmund Rice Administration Wing was built in 1938, the main wing was brick, in its early years the college made extensive use of wood frame, galvanised iron buildings for both dormitories and classrooms in order to cope with steadily growing numbers of pupils.[11]

In 1988, the Aquinas College board was established with responsibility for the day-to-day educational needs of the students, this includes all teaching staff, the headmaster and the head of residential facilities. The major responsibilities of the board include forming policy, planning future developments, and financial management.[14]

1989 saw the cadet unit at Aquinas moved outside of the college and renamed the 501 Regional Cadet Unit Aquinas. The college’s cadets became fully supported by the army as a local group open to boys and girls between the ages of fourteen and eighteen.[15]

In 2004, the College Foundation was established, it exists under the auspices of the Christian Brothers, and is responsible for acquiring and providing the funds necessary to operate and maintain the school. The Foundation operates independently from the Board to ensure a sound financial future for the College, however it does work collaboratively with the College to assist in achieving the College's vision.[16] 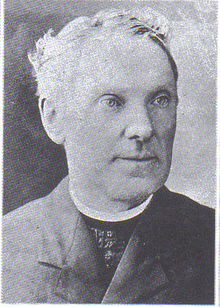 Mount Henry Peninsula, as viewed from the banks of the Canning River

Aquinas College is located on a 62.4-hectare (154-acre) property with three kilometres (1.9 mi) of water frontage along the north bank of the Canning River. The land, which falls within the Manning ward of the City of South Perth, is valued at A$1.2 billion.[22] All of the land belongs to the school which manages and funds the area - including the Mount Henry Peninsula.[23][24]

The campus comprises a number of buildings and sporting facilities necessary for the day-to-day educational needs of the students. Two of these buildings are of historical significance, the Edmund Rice Administration Wing and the Chapel, which are listed with the Heritage Council of Western Australia.[25]

Mount Henry Peninsula is a land feature and reserve located 11 km (6.8 mi) south of Perth, which is owned by the Christian Brothers as part of the Aquinas property. The region is recognised as a bush forever site and is listed on the Register of the National Estate.[26]

The land is managed as a reserve with the Department of Environment and Conservation, Swan River Trust, National Heritage Trust and the City of South Perth for heritage conservation, education and passive recreation values. The college works collaboratively with the Swan River Trust and the City of South Perth on projects relating to the Mount Henry Peninsula including the Mount Henry Peninsula management plan.[6][26]

The decision to commemorate the oval to the servicemen of Aquinas by building a war memorial oval at the front of the main building was undertaken in by the Old Aquinians association in 1940. An appeal to fund the war memorial oval raised ₤5000, Memorial Oval was subsequently opened on 11 November 1951 as a tribute to the servicemen among the Old Aquinians.[27] Outside of the schools usage the ground is used for first-class women's cricket matches between the Western Fury and other state teams.[28][29]

When Aquinas opened in 1938, it started with 173 boarders, there are currently 216 boarders residing at the college. In 2007, international students were required to pay an extra $4,903 in lieu of Government Subsidies and extra administration costs, which brought fees for international students at Aquinas to $29,435.[30]

All boarders live in one of the three boarding residences - Nunan, Gibney and Pinder Boor with their house masters, house mothers and boarding assistants. Meals are served in the Hughes Dining Hall which is located in close proximity to all of the residences, and boarders have 24-hour access to medical services in the College's hospital.[31]

Aquinas College has an eight-house system in both junior and senior school. Each house is named in honour of individuals who have had an association with the school including: Blessed Edmund Rice, founder of the Christian Brothers, William Bryan the first student enrolled at CBC Perth and later to become a Captain in the First Australian Imperial Force, and Patrick Ambrose Treacy who established the first Christian Brothers community in Australia.[32]

Each house has one tutor group for each year, from 7 to 12. Each tutor group is overseen by a house tutor and head of house. The members of each house are led by the house captain. The eight houses compete against each other in events such as athletics, cross country, swimming, debating and chess and points are awarded which go towards the Tuatha shield. The Tuatha shield comprises a diversity of sporting, cultural, and academic activities that set in opposition house against house for points towards the Tuatha shield.[33]

CBC Perth was a founding member of the Public Schools Association of Western Australia in 1905. In the early years of the PSA, rivalry between the four schools was keen, the honour of the schools was closely linked with performance on the sporting field. CBC perceived themselves to be underdogs who had to work hard to build tradition at the school:[34]

[W]e had no traditions to speak of. They had yet to be made – but the builders were even then stripping to the waist. We were late comers into the arena, and were despised, an object of scorn and derision, for we had hardly a scholastic attainment, or a single athletic performance to our credit. The stream of prosperity on which you not float so magnificently [in 1938] was not won without labour and effort. – Jack Savage[35] 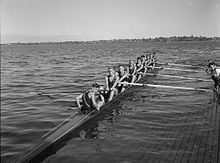 When Aquinas was established in 1938 it took with it all of the sporting records and achievements of CBC Perth.[36] Aquinas' unique position was highlighted in 1962 when Trinity moved from CBC Perth to a new site in East Perth and gained membership to the PSA. The sporting rivalry between the two schools is intense, heightened by their common claim to the heritage of CBC Perth. In these years, there was no doubt in the minds of Aquinas students that when the rest of the crowd at the inter-school athletics meeting shouted Kill the Micks they meant Aquinas, given their record of seven wins from 1965–71 in that period.[37]

Aquinas became a member of the Junior School Heads Association of Australia (JSHAA) in 1958. Students in the junior school participate in JSHAA Sport, as well as sailing, softball and squash programs, which are run separate to the JSHAA

The service-learning program at Aquinas was implemented in 1997, it calls students to "make everyday at Aquinas a better day for others." Social justice has been part of the religious education program since the mid-1980s.[38]

The college's students were the first to participate in the Red Cross soup patrol, the Adult Migrant conversational English program, and the Kindred Family support program. The college won Volunteering WA's difference award in 1998 and 2001 for innovative and outstanding service to the community. In 2002, the college became the first school in Australia to implement a graduate requirement of community service for senior students.[citation needed]

The Old Aquinians Association is an incorporated organisation representing the former students of the college. The association exists to provide fellowship to former students, and to support the college in the provision of scholarships and financial assistance to families in need.[39][40] Aquinas has had many athletes among its alumni, including inaugural Fremantle Football Club captain Ben Allan, Brownlow medallist Simon Black, eight-time olympian Tom Hoad[40] and former test cricketers Justin Langer and Terry Alderman. It has also educated businessman Trevor Flugge, and the leader of the WA Coffin Cheaters motorcycle club, Eddie Withnell.