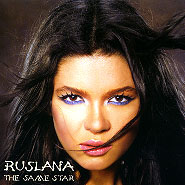 devoted "The Same Star" to her husband, the love of her life.

Ruslana:cquote|"Before my husband and I were married, the whole world seemed to be against us. Together, we overcame difficulties to protect our love and to stay together. Now, whenever we are apart, my husband and I promise to look at the same star…."Look for the star in the sky,"And know that I am looking at it…"

The idea for the video, is that a girl that goes through all of the trials of life -- including but not limited to fame, money, passion and love -- and overcomes everything with the help of the forces of nature (fire, wind).

Ruslana: cquote|"Never during a video shoot had a camera focused so much attention on me! The cameras were recording from every direction: left, right, top, bottom. The cameras then angled themselves to record close-ups and wide angle shots which captured practically every inch of me: ear, nose… Now, all my fans have an unprecedented opportunity to take a close-up look at me. Stylists did great job adding and removing unnecessary spots so, I must admit, I look beautiful :-) …just like a cover girl!"However, all joking aside, I sincerely hope that the audience understands the message of the video clip."