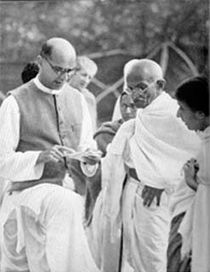 Mahadev Desai (left) reading out a letter to Gandhi from the viceroy at Birla House, Bombay, April 7, 1939.

Mahadev Desai (January 1, 1892 – August 15, 1943) was an Indian independence activist and nationalist writer; he was most famously known for being the personal secretary of Mahatma Gandhi.

Desai was a young lawyer in Ahmedabad when he decided to join Gandhi along with Narhari Parikh, Mohanlal Pandya and Ravi Shankar Vyas, and became his most devoted secretary for over 25 years, from 1917 to 1943. The four were the earliest supporters of Gandhi.

Mahadev Desai was arrested with Gandhi during all the nationalist revolts. The chief period of interest is the time Gandhi was incarcerated in the Yeravda Jail near Pune, Maharashtra from 1931 to 1934. Desai wrote most of his important works on Gandhi during this period. He was arrested on the morning of August 9 after Gandhi's call to the British to Quit India and sent to the Aga Khan Palace for imprisonment. On August 15, 1942, Mahadev Desai died of a massive heart-attack at the age of 50.

Gandhi was devastated by Desai's death at a young age. Both Gandhi and his wife Kasturba Gandhi had seen him as their son, and his death was mourned by Gandhi's supporters across the country.

He wrote several books on the non-violent struggles led by Gandhi in India, and a diary called Day to Day with Gandhi in nine volumes.

Besides writing a day-to-day diary, Desai also contributed regularly to Young India and Navajivan, two journals of which Gandhi was the editor. During Gandhi's incarceration, Mahadev took up the responsibility of the editor of Navajivan. He also translated Gandhi's autobiography, The Story of My Experiments with Truth, into English.

Motilal Nehru, father of Jawaharlal Nehru, requisitioned the services of Mahadev Desai in 1920 from Gandhi to edit the daily newspaper, Independent, from Allahabad. Desai created a sensation by bringing out a hand-written cyclostyled newspaper after the printing press was confiscated by the British government. Desai was sentenced to one year rigorous imprisonment for his writing. In prison, Desai saw that the jail authorities mistreated prisoners, frequently flogging them. His report describing the life inside an Indian jail, published in Young India and Navajivan, compelled the British authorities to bring about some drastic jail reform measures.

Desai was among the founding members of the All India Newspaper Editors' Conference. He also frequently contributed to various nationalist Indian newspapers such as Free Press, Bombay Chronicle, Hindustan Times, The Hindu and Amrita Bazar Patrika.

His son Narayan Desai is also a non-violent activist. 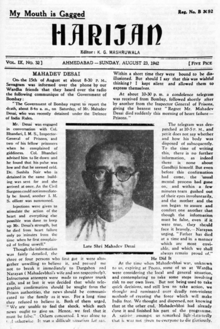