Ministry of Public Security of the People's Republic of China

As the main domestic security agency in the People's Republic of China, the MPS is the equivalent of the National Police Agency in Japan or national police in other countries. It also controls and administers the People's Armed Police. Since the creation of the Ministry of State Security in 1983, the MPS has lost much authority and does not undertake paramilitary functions, which are now within the province of the People's Armed Police, nor does it generally conduct domestic intelligence which since 1983 has been a primary responsibility of the Ministry of State Security. Hong Kong and Macau have their own security bureaus/agencies and police forces. As of 2007[update], the Minister of Public Security is Meng Jianzhu.

Local municipal police under the MPS used to be usually unarmed in contrast to the agents of the PAP; however since 2006 decision has been taken to issue sidearms to all frontline MPS personnel; the chosen firearm is a 9mm double-action revolver manufactured by the China North Industries Corporation.[1]

There have been public complaints that the Public Security Bureaus (Abbreviation: PSB; Simplified Chinese: 公安局; pinyin: gōng ān jú), the provincial and municipal counterparts of the national MPS, are undermanned and unable to deal with what the public perceives to be the problem of rising crime. Other issues that have surfaced in recent years include insufficient salaries, poor training, low morale among the officers, and complaints about abuses of power.

The Ministry of Public Security was among the very first government organs of the PRC. It superseded the Ministry of Public Security of the communist party's Central Military Commission, a transitional body created in July 1949 by removing the security service remit from the CCP Central Department of Social Affairs (CDSA). The ministry began operations on 1 November 1949, at the end of a two-week long National Conference of Senior Public Security Cadres. Most of its initial staff of less than 500 cadres came from the (former) regional CCP North China Department of Social Affairs. At the national level, its creation signaled the formal abolition of the CDSA. The ministry moved to its present location, in the heart of the one-time foreign legation quarters in Beijing, in the spring of 1950.[2] 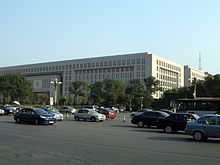 Headquarters of the Ministry of Public Security in Beijing

The MPS is organized into functional departments (see below). Subordinate to the MPS are the provincial- and municipal-level PSB and sub-bureaus at the county and urban district levels. At the grassroots level, finally, there are police stations (paichusuo) which serve as the direct point of contact between police and ordinary citizens. While public security considerations have weighed heavily at all levels of administration since the founding of the PRC, the police are perceived by some outside observers to wield progressively greater influence at lower levels of government.

The organization of local public security stations may be inferred from the tasks with which the police are charged. Generally, each police station has sections assigned to cover census and household registration matters, pretrial investigations, welfare, traffic control, and other activities. Each also has a detention center.

At the time of its creation, the Ministry of Public Security had a simple departmental structure comprising one general office and six functional directorates, numbered sequentially and responsible for political security, economic security, public order and administration, border security, armed security, and personnel. Today’s ministry is organized into the following departments:

Railway, navigation, civil aviation, forestry and anti-smuggling public security departments are under the dual leadership of their superior administration and the MPS.[3]

The public security station generally had considerably broader responsibilities than a police station in the West, involving itself in every aspect of the district people's lives. In a rural area a station typically has a chief, a deputy chief, a small administrative staff, and a small police force. In an urban area it usually has a greater number of administrative staff members and seven to eighteen patrolmen. Its criminal law activities included investigation, apprehension, interrogation, and temporary detention. The station's household section maintained a registry of all persons living in the area. Births, deaths, marriages, and divorces were recorded and confirmed through random household checks. The station regulated all hotels and required visitors who remained beyond a certain number of days to register. All theaters, cinemas, radio equipment, and printing presses also were registered with the local public security station, permitting it to regulate gatherings and censor information effectively. It also regulated the possession, transportation, and use of all explosives, guns, ammunition, and poisons.

Another important police function was controlling change of residence. Without such controls, large numbers of rural residents undoubtedly would move to the overcrowded cities in search of better living standards, work, or education. In April 1984 the State Council issued the Tentative Regulations Governing People's Republic of China Resident Identity, this became the identification card of the People's Republic of China. The regulations, implemented over a period of years, required all residents over sixteen years of age, except active-duty members of the People's Liberation Army and the People's Armed Police and inmates serving prison sentences, to be issued resident identity cards by the MPS. The identification card indicates the name, sex, nationality, ethnicity, date of birth, and address of the bearer. Cards for persons sixteen to twenty-five years of age were valid for ten years; those for persons between twenty-five and forty-five were valid for twenty years; and persons over forty-five were issued permanent cards. As of early 1987, only 70 million people had been issued identity cards, well below the national goal. Also, even those with resident identity cards preferred to use other forms of identification.

Public security officials also made extensive use of their authority to impose administrative sanctions through two sets of documents. These were the 1957 Regulations on re-education through labor, which were reissued in 1979 with amendments, and the 1957 Regulations Governing Offenses Against Public Order, which were rescinded and replaced in 1986 by regulations of the same name. Offenders under the Regulations on Reeducation Through Labor might include "vagabonds, people who have no proper occupation, and people who repeatedly breach public order." The police could apprehend such individuals and sentence them to reeducation through labor with the approval of local labor-training administration committees. The 1957 regulations placed no limit on the length of sentences, but beginning in the early 1960s sentences of three or four years were the norm. The 1979 amended Regulations, however, limited the length of reeducation through labor to three years with the possibility of extensions in extraordinary cases. The Regulations Governing Offenses Against Public Order empowered the police to admonish, fine, or detain people for up to fifteen days. Goods illegally in the possession of an offender were to be confiscated, and payment was imposed for damages or hospital fees in the event that injury had been caused.

The criminal laws in force after January 1, 1980, restricted police powers regarding arrests, investigations, and searches. A public security official or a citizen could apprehend a suspect under emergency conditions, but a court or procuratorate was required to approve the arrest. The accused had to be questioned within twenty-four hours and his or her family or work unit notified of the detention "except in circumstances where notification would hinder the investigation or there was no way to notify them." Any premeditated arrest required a warrant from a court or procuratorate. The time that an accused could be held pending investigation was limited to three to seven days, and incarceration without due process was made illegal.

Two officials were needed to conduct a criminal investigation. They were required to show identification and, apparently, to inform the accused of the crime allegedly committed before he or she was questioned. The suspect could refuse to answer only those questions irrelevant to the case. Torture was rendered illegal.

The 1980 laws also provided that in conjunction with an arrest the police could conduct an emergency search; otherwise, a warrant was required. They had the right to search the person, property, and residence of an accused and the person of any injured party. They could intercept mail belonging to the accused and order an autopsy whenever cause of death was unclear.

In July 1980 the government approved new regulations governing police use of weapons and force. Police personnel could use their batons only in self-defense or when necessary to subdue or prevent the escape of violent criminals or rioters. Lethal weapons, such as pistols, could be used if necessary to stop violent riots, to lessen the overall loss of life, or to subdue surrounded but still resisting criminals. The regulations even governed use of sirens, police lights, and whistles.

The relationship between the police officers assigned to neighborhood patrols and the people was close. Police officers lived in a neighborhood on a long-term assignment and were expected to know all the residents on a personal basis. Their task was not only to prevent and punish crime but to promote desirable behavior by counseling and acting as role models. These socially responsible aspects of the police officer's duties were constant responsibilities, and the bond between the public security units and the people was strengthened annually by means of "cherish-the-people" months, during which the police officer made a special effort to help the local people, especially the aged and infirm.

Police are officially drawn from every segment of the population without restriction as to sex or ethnic origin. Though some foreigner observers believe that Han Chinese are given preference, there is no statistical data available that supports such a contention. Selection is based on political loyalty, intelligence, and health, as it is for the PLA. There is at least one police school in every provincial-level unit, and others are operated by municipalities. Usually those police designated for leadership positions attend the police schools, and patrolmen are trained at the unit and on the job. Legal training is emphasized as a method of improving the quality of the police forces. In 1985 three institutions of higher learning for police personnel were established—the Chinese People's Public Security University, the University of Police Officers, and the Institute of Criminal Police—offering more than twenty special courses. Students are recruited from the pool of senior middle-school graduates under twenty-two years of age, with a waiver to twenty-five years of age for those who have a minimum of two years' experience in public security work.