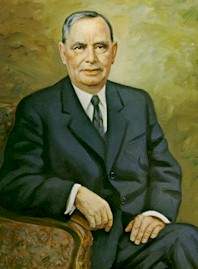 Martin served in the (1912-1914), (1914-1917) and the (1925-1967). He was the Chairman of the Republican National Committee from 1940 to 1942. During the , he stood out as a major opponent of 's policies and opposed his internationalist outlook on foreign affairs. However, he supported a few New Deal measures, like the establishment of the . After 1952, Martin joined the moderate wing of the Republican Party and supported 's internationalist outlook (through support of foreign aid), supporting federal aid for school construction, and supporting 's .

In 1960 published "My First Fifty Years in Politics", by Joe Martin as told to Robert J. Donovan.

Martin was the longtime publisher of "The Evening Chronicle" newspaper in , . Soon after his death it merged with a nearby rival and became "" newspaper.

He served as Speaker of the House of Representatives on two separate occasions from 1947 to 1949 and from 1953 to 1955. These terms represented two Republican short-term majorities in the House, and Martin's two terms were bookended by (D-TX).

Following dramatic Republican losses in the 1958 election cycle, which placed a return to majority status out of reach (for 36 more years, as it turned out, until the 1994 ), Martin was ousted from the leadership by of Indiana. In spite of this defeat, Martin chose to remain as a backbench member of the House. Eight years later, in 1966, he was ousted from his seat in the Republican primary by .

Today in his hometown of , Martin is remembered in the name of one of six local elementary schools. The Joseph W. Martin, Jr. Elementary School bears his name. As well as the Joseph L. Martin Institute for Law and Society, which houses his personal archives. The Martin Institute is located at in North Easton, Massachusetts.