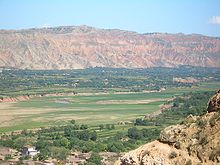 Daxia River valley within a few km from its fall into the Liujiaxia Reservoir. The near side of the river is in Linxia County, the far side, in Dongxiang Autonomous County

The Daxia River (Chinese: 大夏河; pinyin: Dà​xià​hé​) is a tributary of the Yellow River in southern Gansu Province in China's far west.

The Daxia River starts in the northern part of Gannan Tibetan Autonomous Prefecture, where its drainage basin covers large parts of Hezuo County-level City and Xiahe County. It then flows northeast into Linxia Hui Autonomous Prefecture, where it is crosses the breadth of Linxia County, and Linxia City; its lower course forms the border between Linxia County and the neighboring Dongxiang Autonomous County to the east. The river forms a large bay at its fall into the Liujiaxia Reservoir.

Within Linxia Hui Autonomous Prefecture, the wide valley of Daxia River, flanked on both sides by loess plateaus, is a major agricultural and residential area. Both Hanji Town (the county seat of Linxia County) and Linxia City are located in this valley.