Cover of brochure The International System of Units

The International System of Units[1] (abbreviated SI from French: Système international d'unités[2]) is the modern form of the metric system and is generally a system of units of measurement devised around seven base units and the convenience of the number ten. The older metric system included several groups of units. The SI was established in 1960, based on the metre-kilogram-second system, rather than the centimetre-gram-second system, which, in turn, had a few variants. The SI is declared as an evolving system, thus prefixes and units are created and unit definitions are modified through international agreement as the technology of measurement progresses, and as the precision of measurements improves.

It is the world's most widely used system of measurement, which is used both in everyday commerce and in science.[3][4][5] The system has been nearly globally adopted with the United States being the only industrialized nation that does not mainly use the metric system in its commercial and standards activities.[6] The United Kingdom has officially partially adopted metrication, with no intention of replacing customary measures entirely. Canada has adopted it for all legal purposes but imperial/US units are still in use, particularly in the buildings trade.[7]

The metric system was conceived by a group of scientists (among them, Antoine-Laurent Lavoisier, who is known as the "father of modern chemistry") who had been commissioned by the Assemblée nationale and Louis XVI of France to create a unified and rational system of measures.[8] On 1 August 1793, the National Convention adopted the new decimal metre with a provisional length as well as the other decimal units with preliminary definitions and terms. On 7 April 1795 (Loi du 18 germinal, an III) the terms gramme and kilogramme replaced the former terms gravet (correctly milligrave) and grave and on 22 June 1799, after Pierre Méchain and Jean-Baptiste Delambre completed their survey, the definitive standard metre was deposited in the French National Archives. On 10 December 1799 (a month after Napoleon's coup d'état), the metric system was definitively adopted in France.

The desire for international cooperation on metrology led to the signing in 1875 of the Metre Convention, a treaty that established three international organizations to oversee the keeping of metric standards:

The history of the metric system has seen a number of variations, whose use has spread around the world, to replace many traditional measurement systems. At the end of World War II, a number of different systems of measurement were still in use throughout the world. Some of these systems were metric-system variations, whereas others were based on customary systems. It was recognised that additional steps were needed to promote a worldwide measurement system. As a result, the 9th General Conference on Weights and Measures (CGPM), in 1948, asked the International Committee for Weights and Measures (CIPM) to conduct an international study of the measurement needs of the scientific, technical, and educational communities.

Based on the findings of this study, the 10th CGPM in 1954 decided that an international system should be derived from six base units to provide for the measurement of temperature and optical radiation in addition to mechanical and electromagnetic quantities. The six base units that were recommended are the metre, kilogram, second, ampere, degree Kelvin (later renamed kelvin), and candela. In 1960, the 11th CGPM named the system the International System of Units, abbreviated SI from the French name, Le Système international d'unités. The seventh base unit, the mole, was added in 1971 by the 14th CGPM.

One of the CIPM committees, the CCU, has proposed a number of changes to the definitions of the base units used in SI.[9] The CIPM meeting of October 2010 found that the proposal was not complete,[10] and it is expected that the CGPM will consider the full proposal in 2015.

The International System of Units consists of a set of units together with a set of prefixes. The units are divided into two classes—base units and derived units. There are seven base units, each representing, by convention, different kinds of physical quantities.

Derived units are formed from multiplication and division of the seven base units and other derived units[13] and are unlimited in number;[14] for example, the SI derived unit of speed is metre per second, m/s. Some derived units have special names; for example, the unit of resistance, the ohm, symbol Ω, is uniquely defined by the relation Ω = m2·kg·s−3·A−2, which follows from the definition of the quantity electrical resistance. The radian and steradian, once given special status, are now considered dimensionless derived units.[13]

In addition to the SI units, there is also a set of non-SI units accepted for use with SI, which includes some commonly used non-coherent units such as the litre.

Writing unit symbols and the values of quantities

The definitions of the terms 'quantity', 'unit', 'dimension' etc. used in measurement, are given in the International Vocabulary of Metrology.[26]

The quantities and equations which define the SI units are now referred to as the International System of Quantities (ISQ), and are set out in the ISO/IEC 80000 Quantities and Units.

The relationship between the units used in different systems is determined by convention or from the basic definition of the units. Conversion of units from one system to another is accomplished by use of a conversion factor. There are several compilations of conversion factors; see, for example, Appendix B of NIST SP 811.[21]

Three nations have not officially adopted the International System of Units as their primary or sole system of measurement: Myanmar (Burma), Liberia, and the United States

The near-worldwide adoption of the metric system as a tool of economy and everyday commerce was based to some extent on the lack of customary systems in many countries to adequately describe some concepts, or as a result of an attempt to standardise the many regional variations in the customary system. International factors also affected the adoption of the metric system, as many countries increased their trade. For use in science, the SI prefixes simplify dealing with very large and small quantities.

Many units in everyday and scientific use are not SI units. In some cases these units have been designated by the BIPM as "non-SI units accepted for use with the SI". [27] [28] Some examples include:

The fine-tuning that has happened to the metric base-unit definitions over the past 200 years, as experts have tried periodically to find more precise and reproducible methods, does not affect the everyday use of metric units. Since most non-SI units in common use, such as the US customary units, are defined in SI units,[34] any change in the definition of the SI units results in a change of the definition of the older units, as well.

One of the European Union's (EU) objectives is the creation of a single market for trade. In order to achieve this objective, the EU standardised on using SI as the legal units of measure. As of 2009, it has issued two units of measurement directives which catalogued the units of measure that might be used for, amongst other things, trade: the first was Directive 71/354/EEC[35] issued in 1971 which required member states to standardise on SI rather than use the variety of cgs and mks units then in use. The second was Directive 80/181/EEC[36][37][38][39][40] issued in 1979 which replaced the first and which gave the United Kingdom and the Republic of Ireland a number of derogations from the original directive.

The directives gave a derogation from using SI units in areas where other units of measure had either been agreed by international treaty or which were in universal use in worldwide trade. They also permitted the use of supplementary indicators alongside, but not in place of the units catalogued in the directive. In its original form, Directive 80/181/EEC had a cut-off date for the use of such indicators, but with each amendment this date was moved until, in 2009, supplementary indicators have been allowed indefinitely. 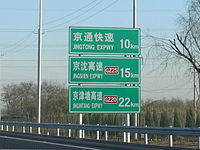 Chinese expressway distances road sign in eastern Beijing. Although the primary text is in Chinese, the distances use internationally recognised characters.