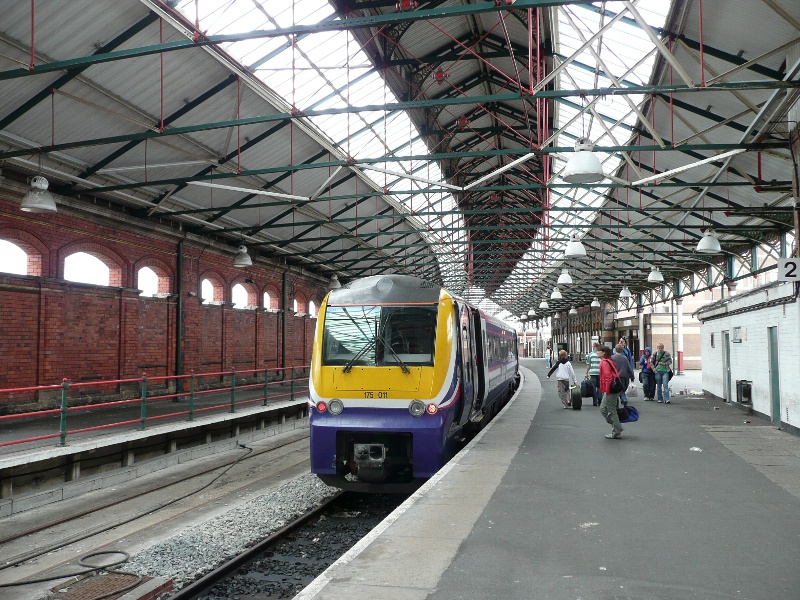 Holyhead railway station serves the town of (Welsh name: "Caergybi") on . It is the western terminus of the and is managed by , although also serves it.

There is a basic hourly service to via Bangor, Llandudno Junction, , , and . There are also through services to London Euston (four per weekday, three on Saturdays, two on Sundays), Cardiff Central, Crewe (both every two hours) and Manchester Piccadilly (two per day).

Holyhead station is linked to Holyhead Ferry Port, which offers several sailings daily to and from both and . The fastest services between Dublin and London by fast ferry and train take under seven hours.

The first station in Holyhead was opened by the on August 1st 1848 but this was replaced by the second in September 1851. The present station was opened by the on and still retains it's overall roof. It originally had four platforms, but only three are currently in use - the track to the former platform three having been lifted. Platform one (on the western side of the station) is separated from the other two by the ferry terminal buildings & inner harbour and is the one normally used by through services to London - most other trains use platform two (platform four is only used occasionally as it is outside the train shed and open to the elements). There used to be a rail-served container terminal next to the station, but this closed down in the early 1990s (when the traffic transferred to Liverpool [http://www.2d53.co.uk/holyhead/23Dec80.htm] ) and has since been demolished.