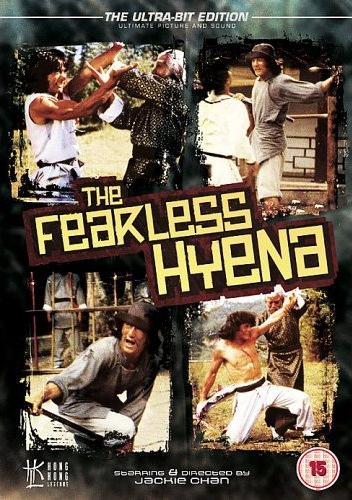 "The Fearless Hyena" (Cantonese-tjp|t=笑拳怪招|j=Siu kuen gwaai jiu|p=Hsiao chuan yi chao) is a 1979 directed and starring . The film was co-directed by .

Shing Lung (Jackie Chan) is a youngster, living in a remote village with his grandfather, kung fu master Chen Peng-fei (James Tien). Lung does not take his training seriously enough, gambles and gets into fights, displaying the skills his grandfather has told him he must keep secret.

Lung briefly finds employment selling coffins, working for an unscrupulous proprietor (), who even stoops to selling second-hand coffins. Lung is fired when he accidentally traps his boss in one of the coffins. After making his escape, he meets up with three thugs he'd beaten up earlier, who ask him to teach them kung fu. Lung meets their sifu, Ti Cha (), the unskilled leader of the Everything Clan. Master Ti offers Lung a lucrative job training his students. Lung makes the mistake of naming the school under the Sien Yi clan name. This comes to the attention of evil kung fu master Yen Ting Hua (), who finds and kills Shing's grandfather.

Lung undergoes training from Unicorn () and by fighting against the top fighters from rival schools. This boosts the reputation of the school and the scheming Master Ti, but eventually allows Lung to take revenge for his grandfather's murder.

Fearless Hyena features several unusual fight scenes, including a , Shing Lung fighting disguised a cross-eyed mentally retarded man and later as a woman, and fighting using "Emotional Kung-Fu", a style that involved vividly displaying the emotions of anger, sorrow, joy and happiness to find the opponent's weakness and thus fighting whilst crying or laughing when hurt.