Infobox_Film
name = A Star Is Born 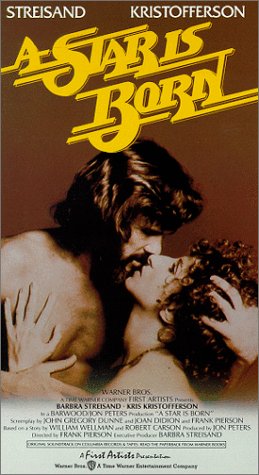 "A Star Is Born" is a 1976 telling the story of a young woman, played by who enters show business, and meets and falls in love with an established male star, played by , only to find her career ascending while his goes into decline. It is a of two earlier versions &ndash; the 1937 version was a starring and , and the 1954 version was a starring and .

Directed by , the film updates the original story and of and with additional contributions by Pierson, and . It also features and . and perform as Streisand's s "The Oreos". Kristofferson's wife and appear briefly as themselves.

The earlier films had portrayed the behind-the-scenes world of Hollywood film making; however, this version adapted the story to the music business. For example, the 1937 and 1954 films each portrayed the lead female character winning an Academy Award, while the 1976 version depicted the heroine winning a instead.

"A Star Is Born" was co-produced by Streisand and her then-partner for and . Among the actors considered for the male lead were and . Both Streisand and Peters wanted for the role: they met with Elvis and discussed the film, and he was interested in taking on the part, thinking it would revive his stagnant career. Elvis' manager, , insisted that Elvis have top billing and asked for a substantial sum of money for the role, even though he hadn't been in a film since 1969 and people were unaware of what kind of box office draw he would be, which essentially ended Elvis's involvement with the project. Parker did not want Elvis to play in the movie because he would not have the lead role.

The film cost around six million dollars to produce, and was a Box Office Smash Hit. Its soundtrack album was also an international success reaching number 1 in many countries and selling nearly 15 million copies worldwide. It featured the ballad "", which became one of the biggest hits of Streisand's career, spending three weeks at number one in the United States, and peaking at number three in the United Kingdom. The filming locations for the film included many locations in such as downtown Tucson, "Tucson Community Center", Sonoita and Tempe. [http://www.imdb.com/title/tt0075265/locations]

A costume note was that Streisand's character's (Esther Hoffman Howard) clothing used in the movie was straight out of Streisand's own closet.

In the two previous versions, Gaynor and Garland were each depicted on screen as winning an Oscar, yet neither won for their film in real life (though both had won an Oscar before, as did Streisand). In this film, Streisand is instead depicted as winning a Grammy; yet ironically, in real life the film's song "Evergreen" won her both a Grammy (for Song of the Year) and an Oscar.

According to at least one Streisand biography, unhappy with a few of Frank Pierson's scenes, Streisand later directed them herself (a claim also made for 1979's "The Main Event"), adding to the rumors that she and Pierson clashed constantly during production.

In 2006 the Region 1 DVD was released in North America in 5.1 dolby sound with extras which include, a full length commentary by Barbra Streisand, 16 Minutes of Never Before Seen/Additional footage and original wardrobe test.

The soundtrack to the movie, performed by Barbra Streisand and Kris Kristofferson, was successful, reaching the number-one spot on the chart. The import version of the CD adds the Spanish version of" Evergreen" as a bonus track.