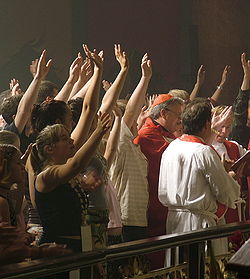 Mass at the Cathedral of the King in Manila

The Charismatic Episcopal Church, more officially known as the International Communion of the Charismatic Episcopal Church (ICCEC), is an international Christian denomination established as an autocephalous communion in 1992. The ICCEC states that it is not a splinter group of any other denomination or communion, but is a convergence of the sacramental, evangelical, and charismatic traditions that it perceives in the church from the apostolic era until present times.

The founders of the ICCEC drew inspiration from a diverse group of 20th century Christian church leaders and thinkers, particularly Alexander Schmemann (Russian Orthodox diaspora), Lesslie Newbigin (Church of South India), Robert E. Webber (Anglican), Robert Jenson (Lutheran), and Thomas Oden (United Methodist); from the patristic fathers of the undivided Christian East and West; and from the doctrine and life of the early medieval priest-monks and bishops of Ireland, Scotland, England, and Gaul (represented by Caesarius of Arles, Columba of Iona, Aidan of Lindisfarne, Chad of Mercia, and Patrick), whom they saw as embodying a fatherly, sacramental, and Spirit-expectant leadership for their congregations.

The ICCEC's founding congregations were independent churches with roots in the Charismatic, Pentecostal, Wesleyan and Third Wave Evangelical movements. The ICCEC claims its apostolic succession via Timothy Michael Barker, the leader of the International Free Catholic Communion and the Rebiban line via the schismatic Roman Catholic bishop Carlos Duarte Costa, who founded the Catholic Apostolic National Church of Brazil.

The Charismatic Episcopal Church believes orthodoxy and orthopraxy to be the essence of the apostolic faith of the New Testament Church and holds the ancient Apostles' and Nicene Creeds as their official doctrinal statements. The ICCEC is not, nor has it ever been, affiliated with the Episcopal Church (ECUSA). The word episcopal is used to describe its hierarchy of bishops (see table). Many churches in the ICCEC, however, claim an Anglican identity and many use the American Book of Common Prayer (1979). A new sacramentary, now in broad trial use, contains modified Roman, Anglican, and Eastern rites.

Pentecostal scholar H. Vinson Synan reports that the ICCEC is the first church emerging from the Pentecostal-Charismatic revivals of the last century to use the term "Charismatic" in its official name.

A Symbol of the ICCEC.

The Charismatic Episcopal Church began when a variety of independent churches throughout the United States, as part of the Convergence Movement, began to blend evangelical teaching and charismatic worship with liturgies from the Book of Common Prayer inspired by the spiritual pilgrimages of modern Evangelical writers like Thomas Howard, Robert E. Webber, Peter E. Gillquist and the ancient Christian writers and their communities. These men, along with theologians, scripture scholars, and pastors in a number of traditions, were calling Christians back to their roots in the primitive church.

On June 26, 1992, Randolph Adler was consecrated the first bishop and primate of the ICCEC with Timothy Michael Barker of the International Free Catholic Communion (who was consecrated by Archbishop-Patriarch Herman Adrian Spruit, and his wife) functioning as the principal consecrator. A few years after the consecration of Adler, the ICCEC's clergy began to express concern about Barker's embrace of theological liberalism, gnosticism, Theosophy, non-traditional sexual ethics, and the ordination of women to the priesthood, all of which are contrary to ICCEC beliefs. In 1996, Adler was named the communion's first patriarch. In 1997, the ICCEC sought and acquired consecration and ordination of all of its clergy by the Brazilian Catholic Apostolic Church. See Charismatic Episcopal Church timeline.

The ICCEC adopted the following vision statement: "The Charismatic Episcopal Church exists to make visible the Kingdom of God; to bring the rich sacramental and liturgical life of the early church to searching evangelicals and charismatics; to carry the power of Pentecost to our brothers and sisters in the historic churches; and finally, to provide a home for all Christians who seek a liturgical-sacramental, evangelical, charismatic church and a foundation for their lives and gifts of ministry." [1]

In an attempt to reconstruct the ecclesiastical government of the undivided Christian church, the ICCEC operates under a form of collegial government which recognizes the assembled body of the bishops as its governing body. More recently, as international congregations joined and the church's official canons were written, a representative group of bishops comprising the Patriarch's Council became the executive branch of the denomination--as fathers among equals.

The ICCEC believes in the dogmatic statements of the Seven Ecumenical Councils of the undivided church, apostolic succession, the real presence of Christ in the Eucharist, the authority of scripture, and the validity of the charismatic revival as a genuine movement of God.[2]

The ICCEC accepts a 66 book Old and New Testament as the Word of God, containing all things necessary to salvation. The additional deuterocanonical books may be read in public worship, but are not used to formulate dogma or doctrine.[3]

In September 2006, the Patriarch's Council began an initiative to establish an official Catechism of the International Communion of the Charismatic Episcopal Church, designating the catechism of the American Book of Common Prayer (1979) as a starting point. The council's stated goal is that the new catechism will reflect the fullness of the ancient catholic and orthodox faith, and the Reformation, as it is expressed in the world today.

In 1999 the ICCEC issued The San Clemente Declaration, a statement of principles governing the CEC's communion with other Christian bodies. The articles of the declaration are as follows:

In earnest anticipation for a future revelation of the fullness of unity of the one, holy, catholic and apostolic Church, the International Communion of the Charismatic Episcopal Church adheres to these articles of unity exemplified by the undivided Catholic Church during the first eleven centuries:

1. The sacred Scriptures of the Old and New Testaments as the written Word of God, the chief witness to apostolic teaching, the source of the Church's nourishment and strength.

2. The Apostles Creed as the Baptismal symbol; and the Nicene Creed as the sufficient statement of the Christian faith.

4. The Historic Episcopate in Apostolic Succession, the gift of Christ's authority to the Church and the trustee of the Church's fidelity to apostolic teaching. 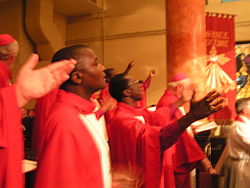 Worship in the ICCEC is sacramental, evangelical and charismatic. Clergy dress in traditional clerical attire and vestments (alb, stole, etc.) in liturgical worship. The principal worship service of the week is the Holy Eucharist. Many parishes follow the liturgy of the American version of the Book of Common Prayer (1979). A provisional sacramentary drafted by the Worship & Music Committee of the Northeast [US] Diocese, which includes Roman, Anglican and Eastern rites, is in wide trial use. Some parishes use other worship rites, such as the 1928 Book of Common Prayer, or other Anglican, Roman, or Eastern rites.

Worship in the ICCEC is to follow “the shape of the historic liturgy” while maintaining “that blessed liberty with which Christ has set us free”. Music is often contemporary and lively, but ancient hymns and chants are also incorporated in most parishes. Many worship services have times of “ministry in the Holy Spirit”, during which such things as prophetic messages, anointing and prayers for healing, and other charismatic gifts are active.

The ICCEC has US chaplains ministering to the US Army, US Navy, US Air Force, US Marine Corps, and US Coast Guard. There are also US reserve chaplains, US state guard chaplains, and one retired chaplain in the Archdiocese of the Armed Forces, which was founded in 1996.

Just weeks after the start of the US Global War on Terrorism, the first ICCEC chaplain deployed to Operation Enduring Freedom in December 2001. Since then, the ICCEC has had a constant presence of at least one of her chaplains deployed to either Operation Enduring Freedom or Operation Iraqi Freedom. These priests have ministered the Gospel and the sacraments to thousands of soldiers, sailors, airmen, marines and coast guardsmen serving in war zones. It is not uncommon for an ICCEC military priest to celebrate the Eucharist, preach, and minister the sacraments hundreds of times during a typical wartime deployment, thus, compressing years worth of ministry into seven-to-twelve month deployments. Most of the ICCEC's chaplains are recent war veterans and have been decorated by either the President of the United States or their respective Service Secretary for their wartime service.

On January 26, 2011, Archbishop Douglas Woodall resigned as Ordinary for the Armed Forces. Abp Woodall stated that he resigned in order to join the Mission Diocese of All Saints, Anglican Church in America (ACNA).[1] However, that statement was refuted by Bishop Derick Jones and other sources within ACNA. [2][3] Chaplains endorsed by the CEC continue to receive oversight through the Office of the Patriarch.

With 117 parishes in the United States [4], the ICCEC experienced considerable growth within its national churches outside of the United States since the late-1990s. The greatest growth has been in Kenya, Uganda, the Philippines, Pakistan, and Brazil, where that nation's largest Anglican congregation joined the ICCEC in 2002. When the ICCEC admitted this Anglican congregation, however, they did so without the consent of the Brazilian church, a violation of the Inter-Communion Agreement established in 1997, that had provided the ICCEC with its apostolic succession, leading to the dissolution of the relationship between the ICAB and the ICCEC.

In the United States, the ICCEC experienced rapid growth for the first ten years of its existence. However, the US growth rate plateaued in the present decade. In 2006 the US church experienced a crisis resulting in the departure of approximately 30% of its clergy and congregations, including seven actively serving bishops and one retired bishop. Though from diocese to diocese a variety of reasons were given for these departures, the crisis stemmed from allegations against some ICCEC leadership in America. These allegations were heard and adjudicated in June and September 2006 by the Patriarch's Council. In September 2006, the council issued a statement of its findings, which was then followed by several more US departures. Some of the departing clergy and congregations found new homes within the Antiochian Orthodox Church as Western-Rite clergy and parishes, some became Roman Catholic, while some are now affiliated with various Anglican bodies.

On January 9, 2008, Archbishop Hines announced that the patriarch’s council, in accordance with the canons, had elected the Most Reverend Craig W. Bates as the ICCEC's new patriarch. On July 30, 2008, during the ICCEC's 4th International Convocation, Archbishop Bates was enthroned as the second patriarch and primate of the ICCEC in North America. The celebration was presided over by the Most Reverend Loren Thomas Hines, Archbishop of Manila and the ICCEC's primate in the Philippines and Asia.