NBC Monitor was an American weekend radio program broadcast from June 12, 1955, until January 26, 1975. Airing live and nationwide on the NBC Radio Network, it originally aired beginning Saturday morning at 8am and continuing through the weekend until 12 midnight on Sunday. However, after the first few months, the full weekend broadcast was shortened when the midnight-to-dawn hours were dropped.

The program offered a magazine-of-the-air mix of news, sports, comedy, variety, music, celebrity interviews and other short segments. Its length and eclectic format were radical departures from the traditional radio programming structure of 30- and 60-minute programs and represented an ambitious attempt to respond to the rise of television as America's major home-entertainment medium.

The show was the brainchild of legendary NBC radio and television network president Sylvester (Pat) Weaver, whose career bridged classic radio and television's infancy and who sought to keep radio alive in a television age. Believing that broadcasting could and should educate as well as entertain, Weaver fashioned a series to do both with some of the best-remembered and best-regarded names in broadcasting, entertainment, journalism, and literature taking part. Monitor and the Sunday-afternoon TV documentary series Wide Wide World were Weaver's last two contributions to NBC, as he left the network within a year of Monitor's premiere.

The enduring audio signature of the show was the "Monitor Beacon" - a mix of audio-manipulated telephone tones and the sound of an oscillator emitting the Morse code signal for the letter "M", for "Monitor". It was described by one source as "a tape loop made from a sequence of 1950s AT&T telephone line switching tones generated by analog oscillators".[1]

The Beacon introduced the show and was used in transitions, for example, to station breaks, accompanied by the tag line: "You're on the Monitor beacon." 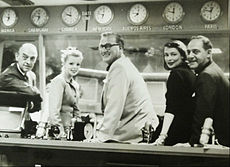 When Monitor began on June 12th, 1955 at 4pm, the first hour of the program was simulcast on NBC-TV. That initial June 12 broadcast lasted eight hours, from 4pm through 12 midnight. Following the Monitor beacon, Morgan Beatty was the first voice ever heard on Monitor. After an introduction by Pat Weaver, news headlines by Dave Garroway and a routine by Bob and Ray, Garroway cued Monitor's opening music remote: live jazz by Howard Rumsey and the Lighthouse All-Stars at the Lighthouse Café in Hermosa Beach, California. It was the first of many jazz remotes in the weeks to come.

On the following Saturday, June 18, Monitor began broadcasting 40 consecutive hours each weekend, from 8am on Saturday to midnight on Sunday. Monitor aired from a mammoth NBC studio called Radio Central, created especially for the program, on the fifth floor of the RCA Building in midtown Manhattan (the same space which is now home to MSNBC). NBC unveiled Radio Central to the national television audience during a segment in the October 16, 1955 premiere of Wide Wide World, including a Monitor interview with Alfred Hitchcock (seen through glass in an adjacent studio and minus audio) and a Monitor newscast (with audio). Built at a cost of $150,000 the glass-enclosed studios of Radio Central were described by Pat Weaver as "a listening post of the world".[2]

Marlene Dietrich was a regular Monitor advisor on emotional problems.

Remote segments originating from locations around the country were a regular part of Monitor, setting it apart from studio-bound broadcasts and taking advantage of network radio's reach. A weekend might include reports from a festival in Tucson, a golf championship in North Carolina, NBC's correspondent in Moscow, or on preparations for the Olympic Games in Melbourne, Australia.

Regular segments included "Celebrity Chef", "Ring Around the World", and "On the Line with Bob Considine". On-the-spot live remote broadcasts from New York City jazz clubs on Saturday evenings included both jazz groups and vocalists, such as Al Hibbler.

Many comedy talents appeared through the years including Woody Allen, Bill Cosby, Selma Diamond, Phyllis Diller, Bob Hope, Ernie Kovacs, Bob Newhart, Jean Shepherd and Jonathan Winters. The comedy team of Mike Nichols and Elaine May appeared on Monitor, as did Jerry Stiller and Anne Meara. Bob and Ray, who won a 1957 Peabody Award for their Monitor comedy routines, often remained at NBC during the weekend to step in if technical problems developed with remote segments. 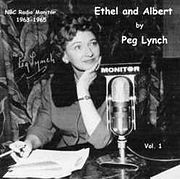 Peg Lynch wrote and performed Ethel and Albert for Monitor from 1963-1965.

In addition to Bob and Ray, several Monitor regulars in its early years helped the show bridge the classic and modern radio eras. Henry Morgan had been a controversial radio comedian in the 1940s. Clifton Fadiman was the legendary host of Information Please, the highbrow quiz show. Mel Allen and Red Barber were familiar baseball voices (respectively, the New York Yankees and the Brooklyn Dodgers) since the 1940s. Garry Moore rose to fame as Jimmy Durante's radio sidekick. Bert Parks was host of the radio hits Stop the Music and Break the Bank.

Several radio comedy shows were revived in the form of regular five-minute Monitor segments, including Duffy's Tavern. Jim and Marian Jordan, better known as old-time radio favorites Fibber McGee and Molly, held down a regular Monitor segment and were said to be negotiating a new, long-term commitment to the show when Marian died of cancer in 1961. Peg Lynch and Alan Bunce, vintage radio's Ethel and Albert, also performed five-minute Monitor vignettes from 1963-1965. Lynch made several of the vignettes available on compact disc for OTR collectors.[3]

The innovative approach of Monitor made it a profitable success for NBC Radio over many years, helping to sustain the network in an era when network radio was collapsing. Its strong start and high popularity led the show to air on Friday nights from 8pm to 10pm in 1957, followed by an expansion to weeknights in 1959, all in addition to its 32 weekend hours (reduced from 40 in late 1955).

By 1961, however, the weeknight Monitor was gone and the weekend schedule cut in half - from 32 to 16 hours each weekend. (This was not quite as drastic a cut as it seems, as some programming that had been counted as part of Monitor's 32 hours--such as Sunday morning religious broadcasts and the radio version of Meet the Press--continued to air on NBC outside of the Monitor schedule.) This was further shortened in 1974 to only 12 live weekend hours (plus nine repeated hours).

Radio stations, especially in large markets, had increasingly adopted personality-driven formats featuring local disc jockeys and sought to establish a clear-cut musical or talk identity for themselves. Because of this, Monitor's "something-for-everyone" programming often did not fit in with schedules and viewpoints of stations, and fewer affiliates carried the program in major markets. Due to this, many of the show's sponsors also pulled away, requiring a shortening of the schedule to keep costs low.

NBC, however, refused to get rid of its biggest money-making show without a fight. The network introduced new music formats and changed hosts (hiring Don Imus, Wolfman Jack, and Robert W. Morgan to alternate on Saturday-night segments) to make the format faster-paced; NBC also created a "custom package" to allow stations to carry certain portions as they saw fit.

Despite NBC's efforts, it had appeared that Monitor's time had come and gone. The network finally gave up fighting the trend by Fall 1974 and simply continued planning and programming the show's six-hour blocks for each Saturday and Sunday.

On January 25 and 26, 1975—just four-and-a-half months shy of celebrating its 20th anniversary—Monitor spent its last 12 hours looking back on its 20-year history (approximately 20,000-plus hours) with hosts Big Wilson and John Bartholomew Tucker. Many clips were played, including Dave Garroway's interview with Marilyn Monroe on the show's first day, Frank McGee's talk with Martin Luther King Jr. in the early 1960s, Bob and Ray spoofing "Miss Monitor" and reporter Helen Hall riding on a roller-coaster.

On January 26, Wilson hosted from noon to 3pm while Tucker hosted from 3-6pm. The program's last guest was Hugh Downs, who talked about his earlier days on Monitor with Tucker. During the show's final minutes Sammy Cahn sang about the show's history ("Monitor: It's Been a Long, Long Time"), followed by Tucker thanking the viewers and staff, after which he said his last farewell. The final sound heard on Monitor was of the "Beacon", followed by the NBC chimes at 5:58:50pm.

Approximately 125 stations still carried the program on its last day; however, very few were in major markets.