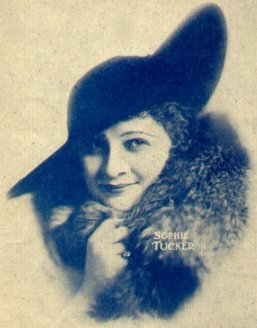 Sophie Tucker (, &ndash;, ) was a and , one of the most popular entertainers in America during the first two-thirds of the 20th century.

She was born Sonia Kalish to a family in . Her family emigrated to the when she was an infant, and settled in . The family changed its name to Abuza, and her parents opened a .

She started singing for tips in her family's restaurant. In 1903, at the age of 19, she was briefly married to Louis Tuck, from which she decided to change her name to "Tucker." (She would marry twice more in her life, but neither marriage lasted more than five years.)

Tucker played and sang and tunes, at first in . She later said that this was at the insistence of theatre managers, who said she was "too fat and ugly" to be accepted by an audience in any other context. She even sang songs that acknowledged her heft, such as "Nobody Loves a Fat Girl, But Oh How a Fat Girl Can Love."

She made a name for herself in a style that was known at the time as a "", performing influenced songs. Not content with performing in the simple minstrel traditions, Tucker hired some of the best African American singers of the time to give her lessons, and hired African American composers to write songs for her act.

Tucker made her first appearance in the in 1909, but didn't last long there because 's other female stars soon refused to share the spotlight with the popular Tucker.

William Morris, the founder of the booked Tucker fresh off her Follies debut at his new . At a 1909 appearance, the luggage containing Tucker's makeup kit was stolen shortly before the show, and she hastily went on stage without her customary blackface. Tucker was a bigger hit without her makeup than with it, and, at the advice of Morris, she never wore blackface again. She did, however, continue to draw much of her material from African American writers as well as African American , singing in a - and -influenced style, becoming known for a time as "The of Ragtime ," a reference to a famous of the .

Tucker made several popular recordings. They included "Some of These Days," which came out in 1911 on . The tune, written by , was a hit, and became Tucker's theme song. Later, it was the title of her 1945 .

In 1921, Tucker hired and songwriter as her accompanist and musical director, a position he would keep throughout her career. Besides writing a number of songs for Tucker, Shapiro became part of her stage act, playing piano on stage while she sang, and exchanging banter and wisecracks with her in between numbers.

Tucker remained a popular singer through the 1920s, and hired stars such as and to give her lessons.

In 1925, wrote one of her most famous songs, "My Yiddish Momme". The song was performed in large American cities where there were sizable Jewish audiences. Tucker explained, "Even though I loved the song and it was a sensational hit every time I sang it, I was always careful to use it only when I knew the majority of the house would understand Yiddish. However, you didn't have to be a Jew to be moved by 'My Yiddish Momme.' 'Mother' in any language means the same thing." She also made the first of her many movie appearances in the 1929 "Honky Tonk".

In the 1930s, Tucker brought elements of for the early years of 20th century into her show. She was billed as The Last of the Red Hot Mamas, as her hearty appetite was a frequent subject of her songs, unusual for female performers of the era. She made numerous popular film appearances, including "". In that film, Tucker sings a song during the big ; even though she is playing a character and not herself, several lights displaying her real name light up in the background of the stage in tribute.

She continued performing in the U.S. and the , until shortly before dying of in 1966 at the age of 82.

She was interred at Emanuel Cemetery in .

Sophie Tucker's comic style is credited with influencing later female entertainers, including , , , and most notably who has included "Soph" as one of her many stage characters. In addition to her performing, Tucker was active in efforts to unionize professional actors, and was elected president of the in 1938.

* included the song "Till There Was You" from "" in their early repertoire. When they performed the song on the televised 1963 Royal Variety Performance in London, ---who sang their version---got laughs from the studio audience when he introduced it by saying "it's also been recorded by our favourite American group---Sophie Tucker."
* Reference to Tucker is made (using somewhat vulgar language) in the song "Roxie" which is part of the score to the musical, "Chicago".
* The stage musical "Meshuggah-Nuns", a sequel to the hit "Nunsense", features a nun posing as Tucker, singing a song called "My Fat is My Fortune".
* She is referred to in Saul Bellow's book "" (1953).
* She is referred to in the television series "Frasier", season 4 episode 9, Dad Loves Sherry, The Boys Just Whine.
* Her song, "Some of these days..." is referred to in Jean-Paul Sartre's "Nausea"She is mentioned several times in the film .