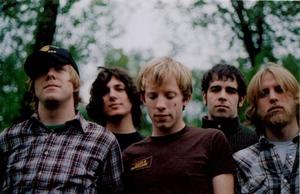 This Day Forward was a -area band active from 1996 to 2003 whose style varied from to with influences.

The band was formed in 1997 in the Philadelphia suburbs by brothers Mike and Gary Shaw on vocals and bass, respectively, along with Randy Wehrs and Mike Golen on guitars and Colin Frangicetto on drums. They initially played local venues, recording their first demo in 1998 and releasing their first full-length, "Fragments Of An Untold Story Born By Shunning The Opportunity" in 1999 on [http://www.breakeven.org Break Even Records] . This was a raw combination of metalcore and screamed vocals, often compared to , but arguably with more melodic riffs. Soon after, they were signed to Eulogy Recordings and released "The Transient Effects of Light on Water" in 2000. Being on Eulogy allowed them to play larger shows, such as 2000 in Syracuse, and they quickly developed a devoted fanbase outside of their home area.

Shortly after the release of "Transient Effects," Vadim Taver, a friend of the band and former guitarist of the metal band (also from the Philadelphia area) joined This Day Forward, and in 2002, this new lineup went on to release the "Kairos" EP. While "Transient Effects" had been a progression from the first release but had stayed more or less true to the same style, "Kairos" was a definite shift. The riffs were often more subtle and not strictly metal-influenced, and the songs, while still generally heavy, were interspersed with many softer parts. In addition, Shaw varied the vocals greatly, incorporating clean singing and an almost spoken-word-like yelling in addition to his original throaty scream. The album was well-received by critics and featured Thursday's doing guest vocals at the end of the song "Sunfalls and Watershine," which received a fair amount of play on college radio stations.

This Day Forward signed to Equal Vision Records in late 2002 with new guitarist Brendan Ekstrom (formerly of ) by which time they had already completed several US tours, and in the following year released "In Response". This album strayed even farther from their initial sound, largely abandoning the screams and incorporating more traditional song structures as well as softer backup vocals by Taver. As a result, the band was predictably accused of selling out by some fans, though others still consider it their best and most original work. In the months following the album, the band toured extensively, playing with bands such as Thursday, Murder by Death, , and before announcing their breakup in November. The reasons for this are not well known. Among the rumors circulating were that some members were dissatisfied with "In Response" or disillusioned with the hardcore scene, but none of these appeared substantiated, although at one of their final shows with , Mike walked offstage in the middle of a song after a fight broke out, saying "and then you wonder why bands break up." The band played the final leg of their last tour in December with , ending with their last show at the First Unitarian Church in Philadelphia - a cherished local music venue where they had played early in their career.

Although This Day Forward seems to be permanently defunct, nearly all of its members have been involved in various musical endeavors since 2003. Mike Shaw and Mike Golen have been writing some music over the years but nothing has ever been official or released - this might happen at some time in the future. Shaw has also has done guest vocals for local band A Trunk Full of Dead Bodies on an unreleased track called "The First to Dance" which also featured Rachel Minton of . Gary is back being a student, while Frangicetto and Ekstrom have teamed up with former vocalist Anthony Green to form the well-known . Vadim Taver had teamed up in an acoustic emo side project called with former guitarist Josh Jakubowski even before This Day Forward had split up. He also appeared on Hot Cross's 2004 EP "Fair Trades and Farewells", Zolof the Rock and Roll Destroyer's first full length "Jalopy Go Far" and played guitar and performed lead vocals in Marigold before leaving and moving to California in summer 2006.