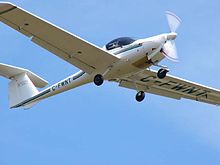 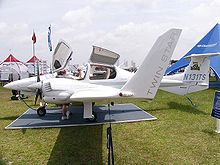 Diamond Aircraft Industries is an Austrian-based manufacturer of general aviation aircraft and motor gliders, which also has a large manufacturing facility in London, Ontario, Canada. The company is majority owned by Medrar Financial Group of Dubai, United Arab Emirates.[2][3][4]

The company produces a range of light aircraft and is actively engaged in the development of a single-engined jet aircraft, the Diamond D-Jet.[5]

The company was founded as Hoffmann Flugzeugbau by Wolf Hoffmann in Friesach, Austria, in 1981, to produce the H36 all-composite motor glider. Becoming Hoffman Aircraft Limited in 1985, and a subsidiary of Simmering-Graz-Pauker AG, the company moved its headquarters to Vienna, Austria. In 1987 the company moved its factory to Wiener Neustadt, Austria. In 1991 the parent company was renamed HOAC AG and purchased by the Dries Family. In the same year, the company started development of the HK36R a Rotax 912 powered motorglider, which was the precursor to the DV20 Katana, the company's first production general aviation aircraft.[6]

In 1992, to supply the North American market more directly, the company opened a second manufacturing facility in London, Ontario, Canada. The Canadian operation used the name Dimona Aircraft until it was changed to Diamond Aircraft in 1996, while the parent company remained HOAC.[6]

The Austrian-built DV20 Katana was certified in 1993, and the first Canadian-built DA20 model was delivered in 1995. It received the Flight magazine's Eagle Award, for best light aircraft in the same year. 1997 marked the delivery of the 500th DV20 and the introduction of the DA20-C1, which had improved performance and load capabilities. The DA20-C1 Eclipse (an improved version of the DA20-C1) also entered production.[6]

In 1998 the parent company was renamed Diamond Aircraft GmbH to better fit the North American operation's naming. The company also purchased the Wiener Neustadt East Airport in that same year. The DA40, a four-place IFR aircraft was certified in 2000, followed by the twin diesel engine DA42 in 2004.[6]

The company informed employees by mail in December 2008 that due to the economic situation they would be laying off 100 workers from the company's Austrian facility in Wiener Neustadt. At that time the facility employed 700 of the company's 2100 worldwide workforce.[1]

In March 2011 the president and CEO of Diamond Aircraft Canada, Peter Maurer, indicated that his company's future was in doubt and relied on getting the D-Jet to market, as piston sales remained slow since the recession. To get the D-Jet into production the company found $20M in private investment, plus the commitment of an additional $35M from the Government of Ontario. The Ontario government investment was contingent on Diamond also securing an additional $35M from the Government of Canada. If both federal and provincial loans were provided then, combined with funds already provided, the total provincial and federal government investment would have been $100M. Maurer indicated "If we don’t get the funding from the federal government, it puts us in a difficult situation. If the D-JET, for example, in a worse case scenario, were not to continue it would have a negative impact on the rest of the company’s operations. [The debts are] at a level that would be very difficult to satisfy out of piston sales,” he said. “I’ll let you do the extrapolation."[7][8]

By the end of March 2011, with a federal election in full swing and no sign of the requested federal government loans coming, the company laid-off 213 London-based employees, mostly on the D-Jet program. Company CEO Peter Maurer stated, "We are hopeful that the government will give this matter urgent attention and provide the requested assistance".[9]

In early April 2011 Diamond indicated that it needed C$8M from the federal government over the next four months as an interim measure. Local Conservative Party of Canada Member of Parliament Ed Holder stated that Diamond owner Christian Dries had told him that Dries would close the London plant and make the announcement just before the federal election, if support was not forthcoming. Dries issued a denial of the conversation, but Holder insisted that was correct. Holder suggested that Diamond look to the province or the city for the money instead.[10]

In mid-April Diamond CEO Peter Maurer indicated that other companies had been hiring their laid-off workers, especially engineers. Piper Aircraft announced that as many as 25 engineers may be moving to Vero Beach, Florida to work on the Piper Altaire jet. Media reports also indicated that Bombardier Aerospace may have made offers to 85 workers to work on the Learjet 85 in Wichita, Kansas. Maurer said that the loss of laid-off workers will hurt a restart of the D-Jet program should government funding be approved. He described the situation as "dire".[10]

At the end of April 2011 Maurer issued a public appeal in the London Free Press for the C$35M loan from the Government of Canada, indicating that if it was not forthcoming that the company might cease operations. Maurer also indicated that the hiring of his laid-off staff, particularly engineers, by his competition might spell the end of the London-based operation anyway, saying "With the loss of this team, the building of a replacement team would add cost and time that the program and company may not survive." By mid-May the company had hired back 11 engineers to prevent other companies picking them up and was hoping to have a decision on the federal loan request after a new cabinet is sworn in.[11][12][13]

Following the 2 May 2011 federal election, which returned a majority Conservative government, Industry Minister Tony Clement announced that the government had rejected Diamond's loan request. Clement said, "We are stewards of taxpayers dollars and we have risked, quite rightly, $20 million in taxpayer dollars to date, and it is not judicious to up that by another $35 million. We hope the company Diamond continues to be part of the scene in London. We do not wish for its demise." Diamond President Peter Maurer indicated that the company was still working on private investment options but that would take more time and that in the meantime they were continuing to lose their laid-off staff. He also stated "We have been very clear that without this loan, the D-Jet program is at risk here in London. Diamond’s future is at risk here." Maurer indicated that when upcoming loan repayments are due that the company cannot meet those obligations out of propeller aircraft sales and without an infusion of capital cannot get the D-Jet to market.[14][15]

In analyzing the declining of the loan, Joseph D'Cruz of the University of Toronto Rotman School of Management indicated that in his opinion the government made the right decision in turning Diamond down. He said, "It's such a high risk, nobody in their right mind would invest...That particular market for that aircraft is a relatively small market and it's unproven....Could this jet go ahead without government assistance? The answer is a definite 'no,' because it's not viable without the federal government."[16]

In late May 2011 Maurer said that he had always considered the Canadian government loans a "long shot" and that the company was looking at other sources of funding to bring the D-Jet to market, including potential Chinese investment. On 14 June 2011 the company announced that it secured private financing from an unnamed source and started recalling its workers, indicating that it would build an extra test aircraft and resume flight testing. Flight testing started again in early September 2011.[17][18][19]

On 13 November 2011 Diamond announced that a majority share of the company had been sold to Medrar Financial Group, an investment company based in Dubai, for an undisclosed amount. The move will provide continued production of the company's piston-engine line and also allow development of the the D-Jet project to continue.[2][3][4]