David Michael "Dave" Navarro (born June 7, 1967) is an American guitarist who plays in the alternative rock band Jane's Addiction and cover band Camp Freddy. He has also played with the Red Hot Chili Peppers, The Panic Channel, and many others.

Navarro was born in Santa Monica, California, to James Raul Navarro and Constance Colleen Hopkins. Dave spent a lot of time with his brother Joe Navarro, who currently resides in Fort Wayne Indiana. Navarro's paternal grandparents were Mexican immigrants.[1] His mother Constance worked as a model, appearing on the television show Let's Make a Deal. Navarro was the only person in his paternal family who did not speak Spanish. This was a result of James and Constance's divorce when Navarro was 7, and he spent the majority of his time with his mother. He attended Notre Dame High School in Sherman Oaks, CA. He later transferred to University High School in Los Angeles, CA.

Constance Navarro was murdered by her boyfriend, John Riccardi, eight years after the divorce. Her killer was arrested in 1991,[2] thanks to a viewer tip after Navarro appeared on the television series, America's Most Wanted. After his mother's death, he moved in with his father.[citation needed]

On his Instructional Guitar DVD Navarro tells how he started playing guitar at the age of 7 after hearing a Jimi Hendrix song at a skate park.

Navarro joined the band Jane's Addiction in 1986 as the lead guitarist after he was recommended to vocalist Perry Farrell by drummer Stephen Perkins, who was a childhood friend of Navarro's. The band became successful and was popular in the alternative-rock music scene. Personal tensions, however, led to their breakup in 1991. The Lollapalooza festival was created by Farrell as a farewell tour for Jane's Addiction.

After the departure of Guns N' Roses' original rhythm guitarist Izzy Stradlin in August 1991, Navarro was the first choice of lead singer Axl Rose to replace Stradlin. However, despite four attempts to have him come in and play with Slash, he never showed up. However, he later went on to play on the 1999 Guns N' Roses song "Oh My God", which was featured on the End of Days soundtrack. In 1993, Navarro formed Deconstruction with Jane's Addiction's Eric Avery on vocals and bass and Michael Murphy on drums, and the band put out one self-titled album in 1994. Rick Rubin was involved in the production and Butthole Surfers singer Gibby Haynes makes a guest appearance. They did not tour due to Avery's exhaustion after Jane's Addiction.

Navarro joined the Red Hot Chili Peppers in September 1993. His first large-scale performance with the band was at Woodstock '94. The only album in which Navarro played with the Red Hot Chili Peppers - One Hot Minute - was released in 1995. The album was seen as a commercial failure (even though it sold over 8 million copies worldwide) and fans were disappointed that Navarro didn't have the same sound as former guitarist John Frusciante, the album received mixed reviews despite producing three hit singles. After two years of touring on and off, and his subsequent heroin relapse, Navarro was fired in 1998.

The album, Trust No One, marked his solo debut in the summer of 2001. In 2002, Jane’s Addiction reformed with bass player Chris Chaney, and started work on a new album. The band entered the studio with veteran rock producer, Bob Ezrin resulting in the album Strays and the Lollapalooza 2003 tour in support of the album. In 2002, Michael Jackson performed at the Apollo Theater, and Dave played guitar for his hit song "Black or White".

Navarro began working with Camp Freddy during this time. In 2003, Dave and his fiancée, Carmen Electra, agreed to have their wedding preparations filmed for an MTV show titled, Til Death Do Us Part. Camp Freddy played at the reception. The show was a great success and was released on DVD in the fall of 2005. Dave’s book, Don't Try This At Home, was released on October 5, 2004 with Regan books, and quickly became a Los Angeles Times bestseller.

Dave co-hosted with Brooke Burke, two seasons of the Mark Burnett television series: Rock Star: INXS and Rock Star: Supernova. Dave and his band, The Panic Channel, released their album One, in August 2006. They toured with Rock Star Supernova (the band formed from the series) in January/February 2007. During this time, Dave began his own internet radio station: SPREAD RADIO LIVE. He soon broadened his creativity with an internet talk show called: Dave Navarro’s SPREAD TV, which was broadcast on Maniatv.com and is currently available for download on iTunes. The show highlighted a myriad of avant-garde subjects, artistry, and the human condition. Videos from the series are also available on Navarro's YouTube channel. 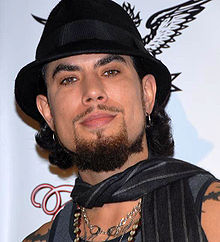 In 2007, Navarro also teamed with Teravision to direct his first adult movie, Broken starring Sasha Grey, in the first of a planned series of celebrity-directed adult movies.[4] This effort won "Best High End All-Sex Release" at the 2008 AVN Awards.[5] Navarro has also made appearances in Season 1 and Season 2 of Z Rock[6] with Brooklyn-based band ZO2 on IFC.[7]

Jane's Addiction reunited once more in 2008 with all of the original members. The notoriously tumultuous band's reunion was widely credited by NME magazine for choosing Jane's Addiction as the recipient of their "Godlike Genius Award for Services to Music". Soon after performing together for the first time in 17 years at the NME Award ceremony in Los Angeles, the band was contacted by Trent Reznor. Trent began working with Jane's Addiction in his studio; they remixed and released two songs ("Chip Away" and "Whores") online.(NINJA 2009 Tour Sampler) This time together in the studio led directly to the pairing of Nine Inch Nails and Jane's Addiction for a worldwide tour in 2009. The tour was branded the NIN/JA tour by fans.

During August 2009, Navarro toured southern California as part of the Billy Corgan-led band Spirits in the Sky.

In 2011, Navarro appeared as the 'Director' of a Rock and Roll Fantasy Camp, playing a complicated passage for a 'camper' to emulate, in a commercial for Citibank.[8][9]

Navarro featured on the track "Girls/Fast Cars" on the album The Wombats Proudly Present: This Modern Glitch. by indie rock band The Wombats.

Navarro has been married and divorced three times. He married his first wife, make-up artist Tania Goddard, in a pagan ceremony[10] in 1990 and his second wife, Rhian Gittins, in a civil ceremony on October 15, 1994. Navarro married model and actress Carmen Electra, on November 22, 2003. On July 17, 2006, Navarro and Electra announced their split to Star Magazine. Navarro posted a message on his blog the following morning saying "I just want to say thanks for all of your love and support. I'm sure that you can understand that I wish to keep all personal matters private." Electra filed for divorce on August 8, 2006.

Dave Navarro's cousin is Dan Navarro who is best known for being half of the folk rock duo Lowen and Navarro. 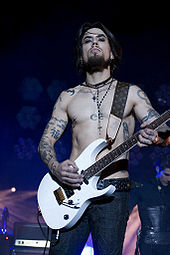 Dave Navarro on stage in Santa Barbara, USA in 2009.

During the first few years of Jane's Addiction, Dave played a black Gibson Les Paul. Around the time of the band's major label debut Nothing's Shocking in 1988, he played Ibanez RG series guitars, including one custom painted with the album cover art. He is seen in the film "Gift" and the "Stop" video playing a blue Ibanez RG, which suggests it was used in the recording of the album Ritual de lo Habitual. During the 1990 Ritual tour, he primarily played a custom-shaped single cutaway gold Ibanez.

Dave began using PRS Guitars on the Lollapalooza tour in 1991. His signature model white PRS is now his number one stage guitar. He has several models in his regular stage and studio rig.

He used a Parker Fly Deluxe for the Chili Peppers days during the live versions of "My Friends". He used it for its super clean tones and its piezoelectric pickup that sounds similar to an acoustic guitar. Dave also openly admits that "It's one of the ugliest guitars I've ever seen", as quoted from the Dave Navarro instructional DVD.

During this era, Dave went with a more treble based guitar in the Fender Stratocaster. He had several in his possession. All of them were a 3 single coil pattern but he also had a Modulus Stratocaster-like guitar made.

Dave has also been seen playing Kramer (Van Halen Signature) Guitars, Fender Telecasters, Takamine Acoustic 12 strings, and even a Squier Hello Kitty Stratocaster given to him by Carmen.

Since late 2008, Dave's been seen using live and in studio a custom white Ibanez RG, with a humbucker/single/single pickup layout, gold hardware, and a vintage style tremolo.

Dave previously used a vintage Marshall JCM800, but now plays through 2 Marshall JCM900 amplifiers which are dubbed Tanjerine and Peach. For large gigs he will also use a Marshall Mode 4 for clean tones. In the studio he is also commonly known to use a Vox AC30 for cleans and a Bogner Uberschall for dirty tones.

Epiphone Guitars (a subsidiary of Gibson) released its Dave Navarro Artist Acoustic in July 2010. According to an interview with Navarro on Gibson.com, the new guitar is based upon the classic Gibson (and Epiphone) "Hummingbird" design, and has already been played by the guitarist in the studio while recording with Jane's Addiction.[11] Named "Jane", the new guitar is black in color (as opposed to Navarro's usual white guitars), and sports a dead tree and crows on the pickguard, rather than the traditional Hummingbird and foliage images.

With The Panic Channel