Newborough Warren (Welsh: Cwningar Niwbwrch) near the village of Newborough (Niwbwrch) is part of a 1,585-acre (6 km2) National Nature Reserve, in Anglesey, Wales. It includes Llanddwyn Bay and Malltraeth Bay, divided by Llanddwyn Island, and part of the Anglesey Coastal Path . There are large expanses of both active and fixed dunes, although many of the latter have been afforested, along with a freshwater lake, salt marsh and mudflats and a tidal island. The reserve contains an outstanding flora, interesting lichen and moss communities and a wealth of invertebrates. The intertidal mudflats and saltmarshes are important wintering grounds for waders and wildfowl regularly supporting over one per cent of the British population of Pintail. Ynys yr Adar, near Ynys Llanddwyn, supports over one per cent of the British breeding population of Cormorant.

In the thirteenth century the Newborough area was a region of rich farmlands and a prosperous town. Newborough was populated by the Welsh townspeople who were evicted from Llan-faes, in the north of the island, by Edward I. However, in the fourteenth century a series of extremely violent storms buried a large portion of this area under sand dunes. The fears of the residents that the dunes would completely swallow the town prompted Queen Elizabeth I to enact a law protecting the Marram grass, the roots of which help to stabilize the dunes. This stopped the advance of the dunes and also provided raw material for a new industry in the town, the weaving of the marram grass leaves to form mats.

Rabbits soon colonized the dunes, giving the area the name Newborough Warren. This provided the residents with another valuable resource, as over 100,000 rabbits a year were taken from the warren. The reduction of the rabbit population through the Myxomatosis epidemic of the 1950s allowed the vegetation on the dunes to spread. 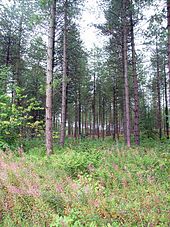 Afforestation of the shifting sands on the north side of the Warren began in 1947, partly to protect the village. Artificial dunes were created and the area planted with Corsican and Scots pine. During the late 70's and 80’s and mid 90's there were concerns that the water levels within the Forest and within neighbouring Warren were falling due to a greater potential evaporation demand caused by afforestation, with the result that winter flooding was not to the same depth and that dune slack pools were drying out sooner. However most UK Atlantic dune systems also reported low water tables, due mainly to low winter rainfall during these times. To address these concerns clearings have been created in the forest, and the forest bordering the warren was heavily thinned. Proposals where put forward in 2004 to remove large parts of the forest. The local community and some conservation groups objected and the forestry Commission and the Countryside council for Wales are currently carrying out a public consultation that will shape the future management of the Newborough woodland.

Today, besides the marram grass (Ammophila arenaria), the warren is vegetated by a wide range of interesting plants. On the dunes themselves, plants such as dune pansies (Viola curtisii), sea spurge (Euphorbia paralias and E. portlandica), and sand cat's-tail (Phleum arenarium) grow alongside the marram grass. Between the dunes, in the marshy hollows called the slacks, a rich flora can be found composed of creeping willow (Salix repens) and a variety of orchids including the marsh orchid (Dactylorhiza purpurella), along with butterwort (Pinguicula vulgaris), Grass of parnassus (Parnassia palustris) and yellow bird's-nest (Monotropa hypopitys). In the last decade, the round-leaved wintergreen (Pyrola rotundifolia) has spread across much of the dune system

Birds common to the dunes include herring gulls, oystercatchers, lapwings, curlew, skylarks and meadow pipits. The dunes are also home to toads and lizards as well as many species of insects. The Warren was featured on the BBC TV programme Autumnwatch in November 2008 in a feature showing the importance of ravens to the area.