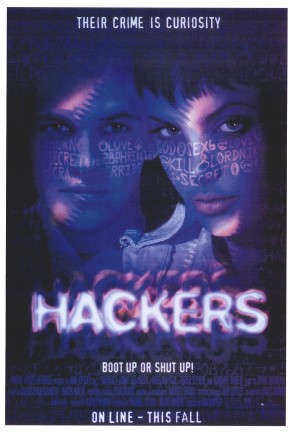 "Hackers" is a 1995 that follows the misfortunes of the young hackers Dade Murphy ('Crash Override'/'Zero Cool', played by ), Kate Libby ('Acid Burn', played by ) and their friends. It was written by and directed by .

The movie Hackers failed to make a profit at the box office but has developed a from its video release. It contains numerous inaccuracies, among them that ical and al sequences are used as a substitute for the real actions involved in hacking and systems administration.

It is the first major film to star future Academy Award winner , and helped to launch the career of .

In 1988, youth Dade "Zero Cool" Murphy () is arrested and charged, at the age of 11, with crashing 1,507 systems in one day and causing a single day 7 point drop in the . Upon conviction he is banned from owning or operating computers or touch tone telephones until his 18th birthday. Shortly before Dade turns 18 his divorced mother Lauren Murphy () takes a new job in New York City. Upon turning 18 Dade calls a local television station, dupes the security guard into giving him the 's phone number (using a tactic known as social engineering) and successfully hacks into the station's computer network, changing the current television program to an episode of "". However, Dade - now calling himself 'Crash Override' - is attacked by hacker 'Acid Burn' on the same network and is eventually kicked off. Dade enrolls in the prestigious Stanton High School where he meets the beautiful Kate Libby () who is responsible for taking him on a tour of the school. After being told of a 'pool on the roof' (which results in Dade and several other students being locked on the roof during a rainstorm) a feud erupts between Dade and Kate. This feud, which spans most of the movie, is umpired by Kate and Dade's mutual friends in the hacking community, Emmanuel Goldstein a.k.a. Cereal Killer (), Ramon Sanchez a.k.a. Phantom Phreak (), and Paul Cook a.k.a. Lord Nikon ().

The real trouble erupts when Joey Pardella (), the younger, novice hacker of the group, successfully breaks into the of a petroleum company, Ellingson Mineral Corporation, to prove to the rest of the clique that he is more than a mere . In order to validate this feat, he part of a garbage file. Unfortunately, the company's IT staff detect this unauthorized entry into their systems and summon computer security expert Eugene "The Plague" Belford (), himself an amoral hacker, to deal with the problem. After investigating the matter, however, The Plague realizes that the seemingly innocuous file that was downloaded is more than just a garbage file - he himself has been using it as a hidden location from which he has been running an illegal program for years, stealing money from the company via "". Knowing a hacker would instantly recognize the tricks of the trade and his otherwise cleverly disguised handiwork, The Plague resolves to cover his tracks. He creates an insidious virus "The DaVinci Virus" (parodying the real life Michelangelo Virus) and installs it across Ellingson's entire network, then enlists the Secret Service to arrest Joey, dismantle his equipment and confiscate the file for him. In order to "motivate" Ellingson and the Secret Service in this matter, The Plague's virus leaves a message: unless Ellingson allocates five million US dollars into a within a week, the virus will a large portion of Ellingson's automated tanker fleet, causing a global ecological catastrophe. The full for the virus, The Plague claims, is located in the file, and he will need it in order to track down and fully disable the virus that Joey allegedly distributed throughout the system.

When the file is not found, however, due to some quick thinking on Joey's behalf, he is released pending a trial regarding the many other illegal discovered in his possession. He brings the disk (hidden in a cigarette carton in the ceiling grating of his bedroom) to Phantom Phreak. Phreak realizes that Joey is being watched by Secret Service agents and both flee. Knowing he will probably also be arrested, Phreak hides the disk, then later calls Kate from jail and pleas for her to do whatever possible to figure out what's on the disk so they can clear their names. Kate and Dade put their competition on hold as Dade, Kate, Cereal Killer, and Lord Nikon attempt to decipher Joey's garbage file. However, after Kate asks Dade to make a copy of the disk, Plague demands his file back, threatening to change Dade's mother's criminal records to include drug offenses and parole violation, so that she will be arrested and incarcerated without trial, and then change them back, effectively making her "disappear." Dade reluctantly complies. After a marathon midnight session, Dade, Kate, Nikon and Cereal Killer have figured out what the file contains: portions of the source code to a computer worm, planted within the Ellingson computer system, that has been stealing a few cents from each transaction Ellingson makes. At this point, the worm has stolen over $21 million. Upon realizing that in order to clear Joey and Phreak, they need to know who planted the worm, at which point Dade reveals that he knows that Plague is behind it, that he gave him the disk, and that Plague came to him because Dade, as Zero Cool, was his first suspect.

Desperate to stop Plague's plans, Dade plans to hack into Ellingson's Gibson supercomputer where the file is believed to have originated. Dade and Kate raid Ellingson's dumpster for discarded Ellingson memos to collect passwords, Cereal Killer poses as a telecom worker to install a wiretap, and Nikon poses as a delivery boy and wanders into Ellingson's , memorizing passwords as workers type them in. While listening in on the , they discover that Plague has told the Secret Service that Ellingson has been hacked again, and subsequently the four of them are scheduled to be arrested at nine the following morning. Trying to get more help, they ask for aid from hacker personalities Razor and Blade, who run a late-night pirate TV show entitled "Hack the Planet." They tell Kate and Dade that they will need more than just a pair of media icons; they will need a vast hacker army. The next morning, the four of them make their way to Grand Central Station, but not before first causing a multi-car accident that keeps the Secret Service at bay. Plague, meanwhile, has been made aware of their attempts and begins fending off their virus attacks. Plague calls Dade to tell him that he has traced their calls and sent the Secret Service to Grand Central, and warns him to flee if he wants to avoid jail. Dade rebuffs him, and Plague severs Dade's connection. Just in time, however, Razor and Blade's "hacker army" arrives, as hackers from around the world begin launching viruses at . Joey finds the original file, copies it and then the collective hackers crash the Gibson. Just then, Dade and company are arrested.Dade surreptitiously throws the new disk in the trash, and yelling, "They're TRASHING our rights!" informs Cereal Killer, hiding amongst the crowd, where the disk is hidden.

As Richard Gill prepares to give another press conference, his feed is cut, and his image is replaced with that of Cereal Killer, who reveals the entire plot: the Da Vinci virus is nothing more than a ruse, to distract from the $25 million Plague was stealing from the company. Plague attempts to escape incognito, posing as , but he is arrested aboard a flight to Tokyo. Finally in the clear, Dade and Kate go on a date together, and "Mess with the Best, Die like the Rest," as were the terms if Dade had won their contest. They sneak onto a pool on the roof of a skyscraper, where they see the lights on several neighboring skyscrapers spell out "Crash and Burn."

The film quotes the "" (written by , also known as The Mentor) from "Phrack" magazine, issue 07, file 03 in 1986. In the film, the character reading the manifesto was holding a copy of "2600" magazine, not "Phrack". Also, the name of one character, ("Cereal Killer"), is borrowed from the of , one of the editors of "2600" (Corley got the name from 's "1984"). Corley helped advise the filmmakers on the hacker subculture, but remains a critic of the film's accuracy.

The film also makes a brief allusion to the 's launch phrase as Phreak exclaims "Yo...this is 'insanely great,' it's got a 28.8 bps [sic] modem!" upon seeing Kate's new laptop during the party. The racing game briefly featured in the movie was a video prototype created during development of Wipeout. The movie also includes a fictional show called "Hack the Planet".

* "Hack the Gibson" is a phrase used in the movie that refers to the hacking of a Gibson , a al brand of probably referring to author , father of the genre and coiner of the term "". It is used colloquially to impugn an achievement, particularly as regards to computers (for example, "Brian thought he was totally hacking the Gibson but ended up formatting his hard drive instead").
* The real name of Matthew Lillard's character, , is taken from George Orwell's novel "1984", which Goldstein mentions at one point during the movie; the fact is also alluded to in a dream sequence when an image of Agent Richard Gill tells The Phantom Phreak (also known as Ramon Sanchez) that "I'm watching you." Emmanuel Goldstein is also the of Eric Corley, who was a technical for the film. A copy of Corley's "2600" also appears briefly hanging on a wall during the movie.
* "" episode briefly seen and heard earlier in the film is .
* The music soundtrack was released in 3 separate volumes over a number of years. The first volume was composed entirely of music featured in the film (with the exception of 's "Phoebus Apollo"), while the second and third are a mix of music "inspired by the film" as well as music actually in the film. Among others, the song "Protection", by , plays during the scene where Angelina Jolie's character is on a balcony during the party setting, and the song does not appear on any of the three soundtracks.
* 's character Lord was given the name because of his . Also, logos and design similar to those of Nikon are displayed at various points in the movie.
* The English tagline ("Their Crime is Curiosity") is taken from a line of the ("My crime is that of curiosity"), published in magazine, issue 07, file 03 in 1986.
* The handle Crash Override is taken from Flash Override, the highest priority level in the system.
* The handle is also the name of a novel.
* The handle The Plague is taken from a member of a hacker group called (MoD).
* Hacker , also known as Dave Buchwald, worked as a technical hacker consultant on set and behind the scenes, coaching the cast and assisting the crew during pre-production and filming.
* From the release booklet:

"Hackers Hacked! When MGM/UA set up a [http://web.archive.org/web/19981201235406/www.mgmua.com/hackers/ website] for Hackers, it was like dangling candy in front of a child. Soon after the site was established, [http://web.archive.org/web/20000229152611/www.mgmua.com/hackers/inventory/hacked/index.html it was hacked] ! A group calling itself the Internet Liberation Front managed to 'doodle' all over the photograph of Hackers stars Angelina Jolie and Jonny Lee Miller, and replaced verbiage, 'this is going to be an entertaining, fun promotional site for a movie,' with 'this is going to be a lame, cheesy promotional site for a movie!' The studio decided to maintain the site during the theatrical run of the movie in its altered form."

However, this is often said to be a publicity stunt by the marketing people involved rather than anything to do with the film.