John Paul Stapp, M.D., Ph.D., Colonel, USAF (Ret.) (11 July 1910–13 November 1999) was a career U.S. Air Force officer, USAF flight surgeon and pioneer in studying the effects of acceleration and deceleration forces on humans. He was a colleague and contemporary of Chuck Yeager, and became known as "the fastest man on earth".[1] 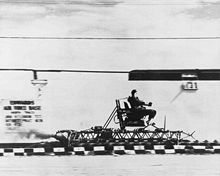 Stapp entered the Army Air Corps on 5 October 1944. On 10 August 1946, he was transferred to the Aero Medical Laboratory at Wright Field as project officer and medical consultant in the Biophysics Branch.[2] His first assignment as a project officer included a series of flights testing various oxygen systems in unpressurized aircraft at 40,000 ft (12.2 km). One of the stickiest problems with high-altitude flight was the danger of "the bends" or decompression sickness. Stapp's work resolved that problem and a host of others that led to the next generation of high-altitude aircraft, as well as HALO insertion techniques. He was assigned to the deceleration project in March 1947.[3]

In 1967, the Air Force loaned Stapp to the National Highway Traffic Safety Administration to conduct auto-safety research. Dr. Stapp retired from the US Air Force with the rank of colonel in 1970.

Works on effects of deceleration

As far back as 1945, service personnel realized the need for a comprehensive and controlled series of studies leading to fundamental concepts that could be applied to better safeguard aircraft occupants during a crash. The initial phase of the program, as set up by the Aero Medical Laboratory of the Wright Air Development Center, was to develop equipment and instrumentation whereby aircraft crashes might be simulated, and to study the strength factors of seats and harnesses, and human tolerance to the deceleration encountered in simulated aircraft crashes.[4]

When he began his research in 1947, the aerospace conventional wisdom was that a man would suffer fatally around 18 g. Stapp shattered this barrier in the process of his progressive work, experiencing more "peak" g-forces voluntarily than any other human. Stapp suffered repeated and various injuries including broken limbs, ribs, detached retina, and miscellaneous traumas which eventually resulted in lifelong lingering vision problems caused by permanently burst blood vessels in his eyes. In one of his final rocket-propelled rides, Stapp was subjected to 46.2 times the force of gravity.[5] The aeronautical design changes this fundamental research wrought are widespread and hard to quantify, but fundamentally important.

The crash survival research program was originally slated to be conducted near the Aero Medical Laboratory, but Muroc Army Air Field (now Edwards AFB) was chosen because of the presence of a 2,000-foot (610-m) track, built originally for V-1 rocket[5] research. That particular program had been completed and was taken over by the deceleration research program.

Designed to Aero Medical Laboratory specifications and fabricated by Northrop Aircraft of Hawthorne, California, equipment was maintained and operated on service contract by the Northrop Company.

The "human decelerator" (dubbed the "Gee Whiz" by the scientists) consisted of a 1,500-pound (680-kg) carriage mounted on a 2,000-foot (610-m) standard gauge railroad track supported on a heavy concrete bed, and a 45-foot (14-m) hydraulic braking system believed to be one of the most powerful ever constructed. Four slippers secured the carriage to the rails while permitting it to slide freely. At the rear of the carriage, 1,000-lbf (4-kN) rockets provided the propelling force. Braking was accomplished by partitioned bins of water and scoops that picked up the water and threw it forward. By varying the number and pattern of brake buckets used and the number of carriage-propelling rockets, it was possible to control the deceleration.[5]

The first run on the rocket sled took place on 30 April 1947 with ballast. The sled ran off the tracks. The first human run took place the following December. Instrumentation on all of the early runs was in the developmental stage, and it was not until August 1948 that it was adequate to begin recording. By August 1948, 16 human runs had been made, all in the backward facing position. Forward facing runs were started in August 1949. Most of the earlier tests were run to compare the standard Air Force harnesses with a series of modified harnesses, to determine which type gave the best protection to the pilot.

By 8 June 1951, a total of 74 human runs had been made on the decelerator, 19 with the subjects in the backward position, and 55 in the forward position. Stapp, one of the most frequent volunteers on the runs, sustained a fracture of his right wrist during the runs on two separate occasions.

Stapp's research on the decelerator had profound implications for both civilian and military aviation. For instance, the backward-facing seat concept, which was known previously, was given great impetus by the officer's crash research program, which proved beyond a doubt that this position was the safest for aircraft passengers and required little harness support, and that a human can withstand much greater deceleration than in the forward position.[6][Need quotation to verify] As a result, many Military Air Transport Service (MATS) aircraft in USAF were equipped or retrofitted with this type of seat. Commercial airlines were made aware of these findings, but still use mostly forward-facing seats. The British Royal Air Force also installed it on many of their military transport aircraft.

As a result of Stapp's findings, the acceleration requirement for fighter seats was increased considerably up to 32 g (310 m/s²) since his work showed that a pilot could walk away from crashes when properly protected by harnesses if the seat does not break loose.

The "side saddle" or sideways-facing harness was also developed by Stapp. The new triangular-shaped harness gave vastly increased protection to fully equipped paratroopers sitting side by side in Air Force aircraft. It was made of nylon mesh webbing, fit snugly over the shoulder facing the forward part of the aircraft, and protected the wearer from the force of crash impacts, takeoffs and landing bumps. It withstood a crash force of approximately 8,000 pounds of force (36 kN) at 32 g (310 m/s²) and was developed to replace the old-fashioned lap belts which gave inadequate protection to their wearers.

By riding the decelerator sled himself, Stapp demonstrated that a human can withstand at least 45 g (440 m/s²) in the forward position, with adequate harness. This is the highest known acceleration voluntarily encountered by a human. Stapp believed that the tolerance of humans to acceleration had not yet been reached in tests, and is much greater than ordinarily thought possible.

Also developed by Stapp as an added safety measure was an improved version of the currently used shoulder strap and lap belt. The new high-strength harness withstood 45.4 g (445 m/s²), compared to the 17 g (167 m/s²), which was the limit that could be tolerated with the old combination. Basically, the new pilot harness added an inverted "V" strap crossing the pilot's thighs added to the standard lap belt and shoulder straps. The leg and shoulder straps and the lap belt all fastened together at one point, and pressure was distributed evenly over the stronger body surfaces, hips, thighs and shoulders, rather than on the solar plexus, as was the case with the old harness.

Stapp also participated in wind-blast experiments, in which he flew in jet aircraft at high speeds to determine whether or not it was safe for a pilot to remain with his aircraft if the canopy should accidentally blow off. Stapp stayed with his aircraft at a speed of 570 mph (917 km/h), with the canopy removed, and suffered no injurious effects from the wind blasts. Among these experiments was one of the first high altitude skydives, executed by Stapp himself. He also supervised research programs in the fields of human factors in escape from aircraft and human tolerance to abrupt acceleration and deceleration.

During his work at the Holloman Air Force Base Stapp became interested in the implications of his work for car safety. At the time, cars were generally not fitted with seatbelts but Stapp had shown that a properly restrained human could survive far greater impacts than an unrestrained one. Many traffic accident deaths were therefore avoidable but for the lack of seatbelts. Stapp became a strong advocate and publicist for this cause, frequently steering interviews onto the subject, organizing conferences, and staging demonstrations (including the first known use of automobile crash test dummies). At one point the military objected to funding work they believed was outside their purview, but they were persuaded when Stapp gave them statistics showing that more Air Force pilots were killed in traffic accidents than in plane crashes. The culmination of his efforts came in 1966 when Stapp witnessed Lyndon B. Johnson sign the law making manufacture of cars with seatbelts (lapbelts at that time) compulsory.[1]

Stapp was an inveterate collector of aphorisms and adages, kept a logbook of such, and the practice spread to his entire working group. He published a collection of these in 1992.[7] Witty and charismatic and thus popular with the press and his staff, Stapp's team in particular, and its workplace subculture is also the clear originating source for the ubiquitous principle known as Murphy's law. Stapp was its popularizer and probably framed its final form, first using the soon to be widespread term in his first press conference about Project MX981 in the phrase, "We do all of our work in consideration of Murphy's Law" in a nonchalant answer to a reporter. It was his team that, within an adaged-filled subculture, and while using a new device developed by reliability engineering expert Major Edward Murphy,[8] coined the euphemistic phrase and began to use it in the months prior to that press conference. When the unfamiliar "Law" was clarified by a subsequent follow-up question, it soon burst into the press in various diverse publications, and got picked up by commentators and talk programs.

Stapp is credited with creating Stapp's Law (or Stapp's Ironic Paradox) during his work on the project. It states "The universal aptitude for ineptitude makes any human accomplishment an incredible miracle".[9]

In 1985, Stapp was inducted into the National Aviation Hall of Fame for his work in aviation safety.

In 1991, Stapp was awarded the National Medal of Technology, "for his research on the effects of mechanical force on living tissues leading to safety developments in crash protection technology".

In the years before his death, Stapp was president of the New Mexico Research Institute, headquartered in Alamogordo, New Mexico, as well as chairman of the annual Stapp Car Crash Conference. This event meets to study car crashes and determine ways to make cars safer. In addition, Stapp was honorary chairman of the Stapp Foundation, which is underwritten by General Motors and provides scholarships for automotive engineering students.

Stapp died peacefully at his home in Alamogordo at the age of 89, a remarkable show of longevity considering the extreme forces his body was subject to during his many years of research.

Stapp's life was dedicated to aerospace safety in particular, and safety in general; he was one of the principal advocates of automotive safety belts, and he would work them into press-conference answers over many years and many press conferences. When President Johnson signed the mandatory seat-belt bill into law in 1966, and consumer advocate Ralph Nader stood by his side, much of the decades-long underlying popularization ground work and its supporting research had been laid by J.P. Stapp, who also stood in the room that day only a short distance away.