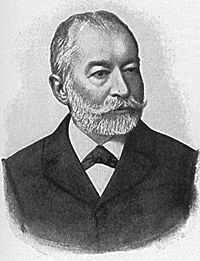 Dimitrie Sturdza (Romanian pronunciation: [diˈmitri.e ˈsturza], in full Dimitrie A. Sturdza-Miclăuşanu; 1833 – 1914) was a Romanian statesman of the late 19th century, and president of the Romanian Academy between 1882 and 1884.

Born in Iaşi, Moldavia, and educated there at the Academia Mihăileană, he continued his studies in Germany, took part in the political movements of the time, and was private secretary to Prince Alexander John Cuza. Sturdza afterwards turned against the increasingly unsanctioned rule of Cuza, and joined Ion Brătianu and others in the deposition of the Prince (1866), becoming a member of the Liberal government.

In 1899 he was elected leader of the National Liberal Party in succession to Brătianu, and was four times Prime Minister - for his last time in office, in 1907, Sturdza was called by King Carol I to handle the crisis created by the peasants' revolt of March.

Although noted for his capacity for work, he was also a nationalist, resentful of "aliens" (in line with the anti-Jewish policies of his party), and supported blocking non-Romanians from a large number of social positions.

He was appointed permanent secretary of the Romanian Academy, and became a recognized authority on Romanian numismatics. As secretary of the academy he was instrumental in assisting the publication of the collections of historic documents made by Constantin Hurmuzachi (30 vols., Bucharest, 1876-1897), and other acts and documents besides a number of minor political pamphlets of transitory value.

His son Alexandru Sturdza, by then a Colonel in the Romanian Army, defected to the Germans in 1916, during the World War I.