An evanescent wave is a nearfield standing wave with an intensity that exhibits exponential decay with distance from the boundary at which the wave was formed. Evanescent waves are a general property of wave-equations, and can in principle occur in any context to which a wave-equation applies. They are formed at the boundary between two media with different wave motion properties, and are most intense within one third of a wavelength from the surface of formation. In particular, evanescent waves can occur in the contexts of optics and other forms of electromagnetic radiation, acoustics, quantum mechanics, and "waves on strings".[1][2]

In optics and acoustics, evanescent waves are formed when waves traveling in a medium undergo total internal reflection at its boundary because they strike it at an angle greater than the so-called critical angle.[1][2] The physical explanation for the existence of the evanescent wave is that the electric and magnetic fields (or pressure gradients, in the case of acoustical waves) cannot be discontinuous at a boundary, as would be the case if there were no evanescent wave field. In quantum mechanics, the physical explanation is exactly analogous—the Schrödinger wave-function representing particle motion normal to the boundary cannot be discontinuous at the boundary.

Electromagnetic evanescent waves have been used to exert optical radiation pressure on small particles in order to trap them for experimentation, or to cool them to very low temperatures, and to illuminate very small objects such as biological cells for microscopy (as in the total internal reflection fluorescence microscope). The evanescent wave from an optical fiber can be used in a gas sensor, and evanescent waves figure in the infrared spectroscopy technique known as attenuated total reflectance.

In electrical engineering, evanescent waves are found in the near-field region within one third of a wavelength of any radio antenna. During normal operation, an antenna emits electromagnetic fields into the surrounding nearfield region, and a portion of the field energy is reabsorbed, while the remainder is radiated as EM waves.

In quantum mechanics, the evanescent-wave solutions of the Schrödinger equation give rise to the phenomenon of wave-mechanical tunneling.

where k is the maximum wave vector that can be resolved, d is the distance between the object and the sensor, and δ is a measure of the quality of the sensor.

More generally, practical applications of evanescent waves can be classified in the following way: 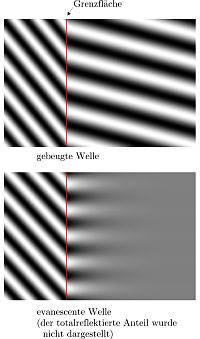 Top to bottom: representation of a refracted incident wave and an evanescent wave at an interface.

For example, consider total internal reflection in two dimensions, with the interface between the media lying on the x axis, the normal along y, and the polarization along z. One might naively expect that for angles leading to total internal reflection, the solution would consist of an incident wave and a reflected wave, with no transmitted wave at all, but there is no such solution that obeys Maxwell's equations. Maxwell's equations in a dielectric medium impose a boundary condition of continuity for the components of the fields E||, H||, Dy, and By. For the polarization considered in this example, the conditions on E|| and By are satisfied if the reflected wave has the same amplitude as the incident one, because these components of the incident and reflected waves superimpose destructively. Their Hx components, however, superimpose constructively, so there can be no solution without a non-vanishing transmitted wave. The transmitted wave cannot, however, be a sinusoidal wave, since it would then transport energy away from the boundary, but since the incident and reflected waves have equal energy, this would violate conservation of energy. We therefore conclude that the transmitted wave must be a non-vanishing solution to Maxwell's equations that is not a traveling wave, and the only such solutions in a dielectric are those that decay exponentially: evanescent waves.

Mathematically, evanescent waves can be characterized by a wave vector where one or more of the vector's components has an imaginary value. Because the vector has imaginary components, it may have a magnitude that is less than its real components. If the angle of incidence exceeds the critical angle, then the wave vector of the transmitted wave has the form

which represents an evanescent wave because the y component is imaginary. (Here α and β are real and i represents the imaginary unit.)

For example, if the polarization is perpendicular to the plane of incidence, then the electric field of any of the waves (incident, reflected, or transmitted) can be expressed as

is the unit vector in the z direction.

Substituting the evanescent form of the wave vector k (as given above), we find for the transmitted wave:

Coupling is usually accomplished by placing two or more electromagnetic elements such as optical waveguides close together so that the evanescent field generated by one element does not decay much before it reaches the other element. With waveguides, if the receiving waveguide can support modes of the appropriate frequency, the evanescent field gives rise to propagating-wave modes, thereby connecting (or coupling) the wave from one waveguide to the next.

Evanescent-wave coupling is fundamentally identical to near field interaction in electromagnetic field theory. Depending on the impedance of the radiating source element, the evanescent wave is either predominantly electric (capacitive) or magnetic (inductive), unlike in the far field where these components of the wave eventually reach the ratio of the impedance of free space and the wave propagates radiatively. The evanescent wave coupling takes place in the non-radiative field near each medium and as such is always associated with matter; i.e., with the induced currents and charges within a partially reflecting surface. This coupling is directly analogous to the coupling between the primary and secondary coils of a transformer, or between the two plates of a capacitor. Mathematically, the process is the same as that of quantum tunneling, except with electromagnetic waves instead of quantum-mechanical wavefunctions.