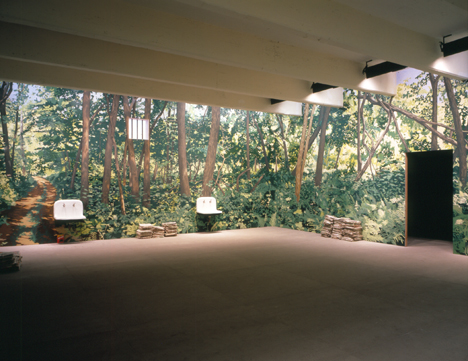 Robert Gober is an American sculptor, who was born in , , . He studied at , and the in . He lives and works in and is represented by the . He is best known for his sculptures, but also has made photographs, prints, and s and has curated exhibitions. He has had exhibitions of his work in , and . One of his most well known series of works was of sculptures of s. He has made many sculptures of everyday objects, showing familiar things as well as strange ones.

His work is often related to domestic and familiar objects such as sinks, doors, and legs, and has themes of , sexuality, , and . The sculptures are meticulously handcrafted, even when they appear to just be a re-creation of a common sink. His work is in many museum collections, including the , The , , , the , the and the . He represented the United States at the 2001 and has had several one-person museum exhibitions including at the , the , , and , New York. His work has also been included in five s. In 2007 there was a retrospective exhibition of his work at the in . The exhibition was accompanied by a comprehensive book of his sculptures entitled "Robert Gober. Sculptures and Installations 1979-2007."