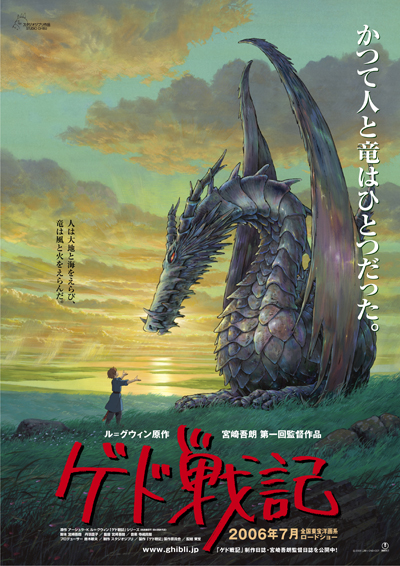 nihongo|" Tales from Earthsea"|ゲド戦記|Gedo Senki|extra=loosely "Ged's War Chronicles" is a feature film from , released in on ,

The movie begins with a war galley caught in a storm at sea. The ship's weatherworker is distressed to realize that he has lost the power to control the wind and waves, but is even more disturbed when he observes two dragons fighting above the clouds, one of which is eventually killed.

Shortly thereafter the King, already troubled by tales of drought and pestilence in the land receives news both of the strange omen at sea and of the disappearance of his son, Prince Arren. The King's wizard tells the tale of how dragons and men were once one, until dragons chose freedom, and men chose possessions, and of his fears of how the land's plight is due to a weakening of the Balance. The King has little time to ponder on this before he is set upon and killed in a dark corridor by a young lad, who turns out to be his son Arren. The prince steals his father's sword and flees the palace.

The action now moves to a desert where Arren is pursued by wolves, and rescued (despite refusing to defend himself) by a wizard who turns out to be Sparrowhawk the Archmage. Arren accompanies Sparrowhawk and travels to the town of Hort. Arren goes to explore the town alone, suddenly becoming scared as if something is following him. As Arren runs away, he sees a young girl, Therru, fleeing from slave hunters from whom he then saves her.

Later in the evening Arren is captured by the slave hunter but loses his sword as the hunter believes it to be worthless junk as it does not even unsheathe (we later discover that this is due to its magical nature). Arren is rescued by Sparrowhawk from the slavers, and they travel to a farm where Therru is looked after by a woman, Tenar, whom Sparrowhawk knows.

The head slaver ("Hair") reports back into a castle to Lord Cob, and almost pays with his life for the loss, until he tells Cob that Sparrowhawk freed the slaves. Lord Cob orders him to bring Sparrowhawk to the castle. Sparrowhawk at the farm reveals that he is investigating the cause of the Balance being upset and leaves for the town of Hort in which he discovers the sword that Arren had is in a merchant shop. Sparrowhawk is then encountered by Hare but he transforms his face to disguise himself. When the slave hunter leaves, he buys the sword.

Arren at the retreat gets scared of the unknown presence following him, and reveals to Therru that he killed his father. Later he leaves in secret. Tenar is captured by the slave hunter as a bait to lure Sparrowhawk into the castle and leaves Therru behind tied to a post as a messenger. Arren is again pursued by the unknown presence and runs away, falling into a lake. Lord Cob who sees this saves him, but manipulates him, saying that Sparrowhawk wants to use Arren to discover the secret of eternal life. Cob persuades Arren to reveal his true name, Lebannen, in order to control him. Sparrowhawk, on the way back to the farm, gives the sword to Therru and tells her to stay and give it to Arren if he returns. He goes to the castle to save Tenar but finds Arren who tries to kill him, but fails. Sparrowhawk is captured as his power is weakened within the stronghold of Cob's castle.

Therru sees a copy of Arren and follows him to the castle, where he reveals he is the light of Arren. He tells Therru his true name, but says he cannot go into the castle with her. Inside the castle, Therru finds Arren and tells him her true name, Tehanu. Both go to rescue Sparrowhawk and Tenar from Lord Cob who is about to throw them off a high tower. The sword that Arren possesses unsheaths and he cuts off Lord Cob's hand, which flies away still holding his staff, rendering him unable to use magic. Cob becomes old due to the magic cast on himself. Cob captures Therru and kills her. However, she does not die but becomes a dragon, thus killing Cob and rescuing Arren from the collapsing tower that Cob destroyed to prevent Arren advancing.

Therru and Arren land in a field, and Therru returns to human form. Arren says he will go back home to face his crime, but will come back to see Therru in the future.

This from is the first anime film adaptation of any part of the Earthsea series. In the past, numerous directors have attempted to adapt the Earthsea cycle for film only to be refused by the author herself. [cite web |url=http://anime.goo.ne.jp/contents/news/NAS120051214001/ |title=ジブリ新作は「ゲド戦記」！宮崎駿氏の長男・吾朗氏が初監督 (The Next Film from Ghibli is "Ged's War Chronicles": Son of Hayao Miyazaki, Gorō to Direct for the First Time) |accessdate=2006-10-08 |author=Sankei Sports|date=14 |year=2005 |month=12 |publisher=goo Anime|language=Japanese] had desired to create an anime version of the cycle, before he made "."

The voice cast for the English-dubbed version includes:

*The three-minute Japanese trailer was first shown in Japanese cinemas starting Saturday . It was aired on NTV on (the day the trailer was completed.

released the First Trailer and Second Trailer on their official web site.

The Earthsea soundtrack was overseen by Tamiya Terashima and was released by and as a hybrid - on . Its release code is TKGA-503 and is B000FNNOTG. was a key collaborator, contributing his , whistle and (bagpipe) to 11 out of 22 tracks. Newcomer sang in 2 of the tracks. A followup album, "Melodies from Ged Senki", was released in and included unreleased Ged Senki OST tracks as well as new tunes by Núñez. Its release code is SICP-1151 and its ASIN is B000HT1ZLW. [Ghibliworld, [http://pages.citebite.com/x1f1q8t3f0kkj MEMORIES FROM GEDO SENKI WITH CARLOS NUNEZ] , 19 December 2006] [ja icon Studio Ghibli, [http://www.ghibli.jp/10info/003503.html カルロス・ヌニェスのニューアルバムの発売決定！] , 11 December 2006]

The film reached No.1 at the Japanese Box Office on its opening week with a gross of over 900 million yen, or approximately 7.7 million , [ [http://www.madman.com.au/actions/news.do?method=view&newsId=712 Tales from Earthsea Tops Japanese Box Office] ] pushing "" to second place and became the number one movie in the country for five weeks, [ [http://eiga.com/ranking/060815.shtml#jp Ranking at Eiga.com from 2006-08-15] ja icon] until it was pushed out of the top spot when was released. [ [http://www.cinemanavi.co.jp/english/end3.html Box Office Japan's Weekly Statistics] ] The movie went on to be the #4 top grossing movie for the year in Japan.

Ursula K. Le Guin, the author of the Earthsea Series, gave a mixed response to the film in her review on her website. Le Guin commended the visual animation in the film but complained that the plot and the content had been changed drastically. She also praised certain depictions of nature in the film, but felt that the production values of the film were not as high as previous works directed by Hayao Miyazaki, and that the film's excitement was focused too much around scenes of violence. Her initial response to Goro Miyazaki was, "It is not my book. It is your movie. It is a good movie."

Le Guin's mixed opinion of the film is indicative of overall reception of the film, particularly in Japan. In Japan, the film found both strong proponents and detractors. Many of the opinions can best be summed up in a response to Le Guin's comments on her website, that the weak points of the film were the result of "when too much responsibility was shouldered by someone not equipped for it."

In the UK, the film was not released as widely as previous Ghibli movies, playing to 23 venues across the nation and making an unremarkable £23,300.Fact|date=August 2007 Reviews were generally mixed. suggested that it "lacks the technical sheen and warm sentimentality of some of Ghibli's earlier films".

Licensing problems are in the way of a North American release of "Gedo Senki", with the Sci-Fi Channel, which released the miniseries "" in 2004, currently holding the rights to the property. Under the current situation, the film cannot be released earlier than 2009, when the miniseries is taken off the air, in which case Sci-Fi's rights expire.

The film was released in selected UK cinemas on , , in both subtitled and English dubbed versions. DVD distributor released an English dubbed and subtitled, region 2 DVD for the UK market on . [ [http://www.play.com/DVD/DVD/4-/3296335/Tales-From-Earthsea/Product.html Play.com (UK) : Tales From Earthsea (Studio Ghibli Collection) (2 Discs) : DVD - Free Delivery ] ] . To mark the release, HMV ran frequent sponsor credits for the DVD, as well as a prize competition, on the channel. [ [http://www.animecentral.com/forums/tm.aspx?m=42635 HMV Sponsorship ] ]

In , "Tales from Earthsea" premiered in on , . The film began a single print tour of major cities on , , currently scheduled to play at locations in , , , and Perth over the coming months. A 2 disc DVD was released on , by . [ [http://b2b.madman.com.au/actions/catalogue.do?method=view&releaseId=8090 Madman Release Schedule] ]

In , "Tales from Earthsea" (Cuentos de Terramar) premiered only in and in 2 small theatres on , , only in Japanese version with subtitles (An odd Theatrical release compared to previous Ghibli movies). A Single DVD and a Special 2 disc DVD were released on , by , this time with Spanish track included.