The club is named after the Black Sea and it was officially established on February 18, 1945, when the two teams from the city FC Vladislav (1916) and SC Ticha (1913) merged together to form a new club. Cherno More's home ground is the Ticha Stadium, which has a seating capacity of 12,500 spectators. To date, the club has won the championship four times and has been a runner-up for the Bulgarian Cup twice.

Оn March 3, 1910, Varna's naval academy for men became the birth place of association football in the country. Here is created the Galata sports association, which later on, in 1913, by the suggestion of a school teacher named Karel Shkorpil, changed its name to Reka Ticha, using the former name of the Kamchia river. Over the next years, it slowly combined with the Sportist sports club and grew into an association of the education, a sports club and the tourism in Varna. The football department of the sports club dominated against all of the clubs in the city, whose existence is quite short. Soon, the first official football match of Ticha, played in 1915, with the 21st Pomeranski polk is a success, and 2 years later, in 1917, so is the first inter-city match. The growth of Bulgarian football required knowledge of the rules, so in 1919, Ticha published for the first time in Bulgaria the book: "Football - rules and admonitions". 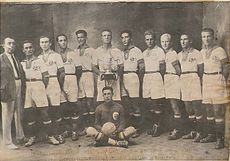 Vladislav Varna in 1925. Vladislav was one of the predecessors of Cherno More.

Significant were the first meetings between Ticha and the capital teams. In early 1919, the first away game against Levski Sofia was celebrated with the first away victory for the team - 4:1. The same went for Slavia Sofia, a 3:0 win. On the return game as guests, the players again won easy against Slavia Sofia with 1:0. Unfortunately, the game with Levski Sofia didn't take place, because the city mayor didn't allow it, since there were protests from dock workers the same day. However, these victories against the capital teams were continued not only by Ticha, but from the city rivals Vladislav and Shipchenski Sokol as well.

On January 21, 1919, the association changed its name to Sports Club Ticha, and the kit colours of the outfit were chosen to be red and white. The same year, the famous Bulgarian musician Nikola Nitsov wrote the official anthem of the club.

In 1925, the international successes came nearby. SC Ticha won the Cup of Bucharest, the first international football trophy won by a football club from Bulgaria. The European matches of Ticha easily earned the 1st place of favor among most of the football fans in Varna. The same and the following year, SC Ticha made another remarkable achievement, twice winning the football title of Bulgaria. A few years later, the club managed to finish in 2nd place in the 1934/35 and in the 1935/36 season. Soon, in 1937, the football governing body in the country created the National Football Division. Several reforms were made in the football clubs, but during the two half-seasons in 1937/38, Ticha dominated and it was one of the best football teams in Bulgaria, despite finishing the table in the 2nd place at the end of the season.

In 1945, the two former city club rivals, SC Ticha and FC Vladislav merged together to establish a new club, named TVP-45 (a few years later SC Primorec was also invited to join TV-45 so the name of the association was changed to "TVP".). This marked the creation of a new sports association, which met the development requirements of the leading communist authorities at that time. In the following years, due to these requirements, the club's name was forced to be changed several times to Botev pri DNA (1948–1950), VMS (1950–1955), SCNA (1956–1957), ASC Botev Varna (1957–1959) and many others.

In 1953, VMS, won most of the matches with the capital teams, and finally managed to finish the season in the 3rd place and to participate in the European club competitions.

In 1959, the football club changed its name to Cherno More (The Bulgarian name of the Black Sea), which is known by this name to present date. The recently appointed new coach Ivan Mokanov managed to put together a stable team, which starting line-up was constant, as much in the field, as in their love for the association. These years, many friendly club matches were made and famous football clubs came to Varna in order to compare skills, giving Cherno More's players more experience and self-confidence. One of these matches, was the remarkable victory against AFC Ajax in 1966, won with 3:1, in which the young Johan Cruijff took participation.

Many players from that Cherno More generation founded place among the different national teams. The national jersey have put on Ivan Ivanov, Nikola Dimitrov, Zdravko Mitev, Stefan Bogomilov, Damyan Georgiev, while others made just the bench. Then followed years of planting roots in the youth academy, which produced talented competitors, worthy of their ancestors. The successes came in the Republican League, where the youth teams, minors, juveniles, and seniors were always in the final stage of the competitions.

In the 2007-08 season, the sailors finished 5th in A PFG and qualified for the last season of the UEFA Cup, due to the license problems of CSKA Sofia. Led by their captain Alex they had a very successful run - they defeated UE Sant Julia from Andora in the first qualifying round (9-0 on aggregate)[2] and Maccabi Netanya from Israel in the second qualifying round (3-1 on aggregate). Cherno More than challenged German side VfB Stuttgart in the 1st round and were eliminated after a 1-2 loss at home and a surprising 2-2 draw in Stuttgart. The same season in the domestic league was also very successful for the team, which finished 3rd in A PFG, and qualified for the newly created Europa League.

Cherno More started the new 2009-10 season with the debut of the team in the UEFA Europa League. The sailors defeated Iskra-Stal in the second qualifying round (4-0 on aggregate) and were drawn to play against the Dutch powerhouse PSV Eindhoven in the third qualifying round.[3] The team from Varna was eliminated after a 0-1 loss at Eindhoven and another 0-1 loss at the Lazur Stadium in Burgas.

Chronology of the names 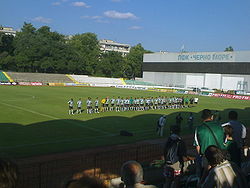 Ticha Stadium is a multi-use stadium in Varna, Bulgaria. It is currently used for football matches and is the home ground of Cherno More. It is situated in the north-eastern part of Varna. Built in 1968, the stadium currently has a capacity of 12,500 seating places, spread in two opposite stands. The main north stand has a roof cover and holds 7,000 spectators, while the opposite south stand has a seating capacity of 5,500 spectators. The south stand is commonly used by the Cherno More ultras and the away fans. The current stadium was built with the help of hundreds of volunteers and fans of the club.

It was officially announced, that the club will move to a new stadium[4], which will replace the unused Yuri Gagarin Stadium and the current Ticha. The stadium will have a capacity of 30,000 spectators. The stadium, as part of Sport Complex Varna, will have an underground parking area, convertible roof covers, office lounges, two-tier stands and four 50 meter towers, which will block the pressure of the terrain and bring the stadium in a shape of a ship. The convertible roof covers will be made of transparent panels, which will allow the light of the floodlights to stream inside the pitch on a night match. The venue will be awarded with an Elite Stadium rating by UEFA.

Cherno More's all-time leading scorer is Stefan Bogomilov, who scored 162 goals for the club (from 1962 to 1977). The club's second highest scorer is Nikola Dimitrov, who scored 63 goals. Bogomilov also holds the club record of 4 hat tricks. Brazilian player Marcos Da Silva holds the club's and A PFG's record for the fastest goal - 12 seconds after the referee's first signal, against PFC Chernomorets Burgas Sofia on April 6, 2007.

Cherno More's biggest victories in A PFG are the 8-0 wins against Cherveno Zname Pavlikeni in 1955 and Maritsa Plovdiv in 1968. Cherno More's largest defeat, 1–8, was against Lokomotiv Plovdiv in 2004. Also, the club's win against UE Sant Julia, 5-0, in 2008, was the largest European win in the club's history.

As of August 6, 2011 Note: Flags indicate national team as has been defined under FIFA eligibility rules. Players may hold more than one non-FIFA nationality.