Clive Bernard Churchill AM (21 January 1927 – 9 August 1985) was an Australian rugby league footballer and coach of the mid-20th century. An Australian international and New South Wales and Queensland interstate representative fullback, he played the majority of his club football with and later coached the South Sydney Rabbitohs. He won five premierships with the club as a player and three more as coach. Retiring as the most capped Australian Kangaroos player ever, Churchill is thus considered one of the game's greatest ever players[3] and the prestigious Clive Churchill Medal for man-of-the-match in the NRL grand final bears his name. Churchill's attacking flair as a player is credited with having changed the role of the fullback.[4]

Clive Churchill was born in Merewether, New South Wales, a star schoolboy five-eighth at Marist Brothers Hamilton where he won five premierships while at school. The brothers at his school banned him from playing with Central Newcastle juniors and as a result he only appeared for them a handful of times.[2] In 1946 he was graded with Central in the Newcastle competition as a fullback.

He represented for Country Seconds in 1946 and came to the attention of Sydney talent scouts. He was signed to South Sydney by their patron Dave Spring and moved to Sydney at the start of the 1947 season. He would spend twelve seasons with the club playing 164 games.

He won five premierships with Souths in 1950, 1951, 1952, 1954 and 1955. He missed the 1952 premiership as he was away on the Kangaroo tour to England and missed the final in 1955 due to injury (he played the entire semi-final against Manly with a broken arm, winning the game with a successful sideline conversion kicked after the full-time bell with his broken arm wrapped in cardboard).

In 1959 Churchill captain-coached Brisbane Norths to a premiership. He retired from playing at the end of the season although in 1961 he played a swansong season in the outback town of Moree, New South Wales.

He also played 37 games for New South Wales the standing record for most games by a player for the state (ahead of Langlands and Ray Stehr).

Churchill, widely renowned for his coaching career, toured Europe with the 1959 Kangaroos as non-playing coach.[5] In 1967 Churchill was appointed coach of South Sydney. He had immediate success, the Rabbitohs winning the premiership in his inaugural year as coach. He steered the Rabbitohs to four premiership victories out of five grand final appearances between 1967 and 1971. Churchill resigned as coach of the Rabbitohs during the 1975 season.

Churchill also had success in coaching the Queensland and Australian teams. Churchill was also commemorated as one of Australias most successful coaches. 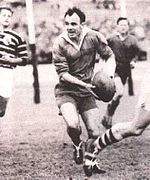 Clive Churchill in action for the Rabbitohs

On 10 June 1985 Churchill was honoured as a Member of the Order of Australia "in recognition of service to sport, particularly Rugby League Football and to the community". Also that year he was selected by the respected publication Rugby League Week as one of the initial four post-war “Immortals” of the Australian game alongside Fulton, Raper and Gasnier.[2]

In 1986 the newly built Clive Churchill Stand at the Sydney Cricket Ground was named in his honour. He is one of only six sportsmen and two rugby league players to have a stand at the SCG named after him. The Clive Churchill Medal has, since 1986, been awarded annually to the player judged best on ground in the season's Grand Final. A plaque in the Walk of Honour at the Sydney Cricket Ground commemorates his career as not only a great player but as an alltime great coach.

In 2002 Churchill was inducted into the Australian Rugby League Hall of Fame and was later named in the South Sydney team of the Century.

In 2007 Churchill was selected by a panel of experts at fullback in an Australian 'Team of the 50s'.[6]

In February 2008, Churchill was named in the list of Australia's 100 Greatest Players (1908–2007) which was commissioned by the NRL and ARL to celebrate the code's centenary year in Australia.[7][8] Churchill went on to be named as fullback in Australian rugby league's Team of the Century. Announced on 17 April 2008, the team is the panels' majority choice for each of the thirteen starting positions and four interchange players.[9][10]