The Black-naped Oriole (Oriolus chinensis) is a bird of the oriole family and is found in many parts of Asia. There are several distinctive populations within wide distribution range of the species and in the past the Slender-billed Oriole (Oriolus tenuirostris) was included as a subspecies. Unlike the Golden Oriole which only has a short and narrow eye-stripe, the Black-naped Oriole has the stripe broadening and joining at the back of the neck. Males and females are very similar although the wing lining of the female is more greenish. The bill is pink and is stouter than in the Golden Oriole. 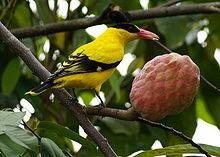 The Black-naped Oriole is medium sized and overall golden with a strong pinkish bill and a broad black mask and nape. The adult male has the central tail feathers tipped yellow and the lateral ones are more broadly yellow. The female has the mantle colour more greenish or olive. The juvenile has a streaked underside. The nestling has dull greenish with brown streaks. The head and nape are more yellowish and the undertail coverts are yellow. Several variations exist in the populations that have been separated as subspecies.[2]

Subspecies diffusus breeds in China and is widespread across India during winter, mainly in the northeastern parts and in the peninsular region. The population in the Andaman and Nicobar Islands are resident. The subspecies in the Andamans, O. c. andamanensis has all black wings while O. c. macrourus of the Nicobars has a very broad nape band so that only the top of the head is yellow. The wings are all black with a yellow primary covert patch. The calls of the Andaman and the Nicobar subspecies are said to be quite different, the latter having a more modulated call note.[3][4] The evolutionary history of this group of orioles is complex and there may be more cryptic species within the group.[5] In the Southeast Asian populations some geographic trends include a reduction of yellow on the forehead and a decreased brightness in the yellow plumage from north to south. Females from southern populations are more greenish on the back and tail and there are no yellow spots on the tips of the secondaries as in northern populations.[6] 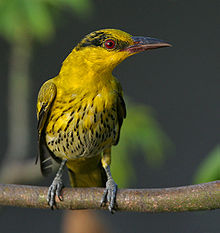 In winter populations breeding in eastern Asia winter in the tropical areas of Southeast Asia.[14] Subspecies diffusus is an uncommon migrant in many parts of South India and are most regularly seen in the Western Ghats.[5] In Singapore they are believed to have established as breeders only in the 1920s and are today common even within gardens in the city. In the 1880s they were considered rare.[15] 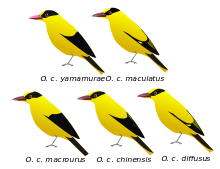 Males differ geographically in extent of black and yellow on head, wing and tail 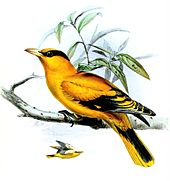 Black-naped Orioles have been recorded to feed on a range of berries including Trema orientalis, Ficus and others apart from insects. It has been suggested that they may have aided in the dispersal of Ficus species into the island of Krakatoa where they were also among the early pioneer species.[16] In India it has been noted to take nectar from large flowers such as those of Salmalia and Erythrina.[3] They can sometimes be nest predators on smaller birds.[17] The breeding season is April to June (January–March in the Nicobars[18]) and the nest is a deep cup in a fork of a tree.[5] The eggs, two to three, are salmon pin with reddish spots and darker blotches[2][19] The nests are often built in the vicinity of the nest of a Black Drongo. Two or three nests may be built by the female and one is finally chosen for laying eggs.[18] Males may sometimes sit beside the unused nests. Incubation is by the female alone and the eggs hatch after 14 to 16 days and the chicks fledge after another two weeks. Females stay closer to the nest, taking part in nest sanitation by removal of fecal sacs, driving away predators and feeding the young. The males take a more active role in feeding and guarding. Eurasian Tree Sparrows and Black Bulbuls may sometimes use abandoned nests. Nest predators include crows, treepies and hawks.[20] In many parts of Southeast Asia, they are trapped and sold in the bird trade.[21]