For the game itself, see Hearts (card game)

Hearts is a card game that is included in Microsoft Windows. 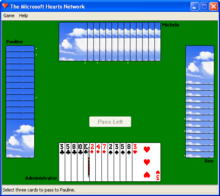 Hearts was first included in Windows with Windows for Workgroups 3.1, released in October, 1992,[1] which included a new networking technology that Microsoft called NetDDE. Microsoft used Hearts to showcase the new NetDDE technology by enabling multiple players to play simultaneously across a computer network. This legacy could be seen in the original title bar name for the program, "The Microsoft Hearts Network".

Hearts continued to be included in subsequent versions of Windows, although it was absent in all Windows NT-based OSes prior to Windows XP including Windows NT 4.0 and Windows 2000. From the 'Help' menu, Hearts offered a quote from Shakespeare's famous play, Julius Caesar (act III, scene ii): "I come not, friends, to steal away your hearts...". Later versions of Windows starting with Vista removed this feature, and changed the title bar name to "Hearts".

Game play follows the standard rules of Hearts. When the game is first loaded, the user is prompted for their name, and then the game begins. The computer uses all three hands against the player. The game ends when at least one player has 100 or more points at the end of a hand.

The user is given thirteen random playing cards, and selects any three of them to pass. For the first hand, cards are passed to the left; for the second, to the right; for the third, across; and for the fourth, the passing stage is skipped entirely, and the players keep (or "eat") their cards. On the fifth hand, the cycle starts again, passing to the left. In any case, after passing three cards, the players receive three cards, and play begins.

As Hearts is a trick-taking game, the game progresses by tricks. Each player plays one card to a trick, which is won by the player of the highest card of the suit led. There is no trump suit.

For each hand, the player with the Two of Clubs leads first, and they must play that card. Subsequent leads are by the winner of the last trick. For tricks after the first, any card can be led, except that a Heart cannot be led until Hearts have been "broken". Hearts are broken with the first Heart played in the hand, which can be done in only two situations: 1. A player who did not lead a trick may play a Heart to it if they cannot follow suit (and it is not the first trick in the hand); 2. A player with only Hearts left in their hand may lead with a Heart.

Players must follow the suit led if able to (with any card of their choice in that suit) - otherwise they may play any card, except that a point card cannot be played to the first trick in each hand. (Interestingly, the rules as stated leave one highly improbable situation unresolved: if, after the cards were dealt and passed, one player had all thirteen Hearts as their hand, or twelve Hearts and the Queen of Spades, they would be unable to play legally at all to begin with, since point cards cannot be played to the first trick.) 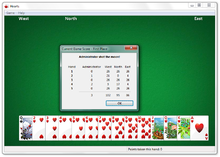 A player who takes all point cards has "shot the moon"

Any players who took point cards incur the appropriate points for those, which are added to their previous score. But any player who succeeds in taking all point cards (worth 26 points) has successfully "shot the moon", and they incur no points, while the other players incur 26 points each.

After each hand, a scoreboard shows the current and previous scores of all four players, with the current leader's (or leaders') score written in blue. Each of the players has in front of them all of the point cards accumulated during the preceding trick, for easy identification of who got how many points (and a quick check to see if a player shot the moon). The game ends when one player reaches 100 or more points, and the winner is the player with the lowest score. A tie is possible if two or more players have the equal lowest score, and if the human player is one of them, the computer credits him or her as the winner. When the game ends, the score of the winning player(s) is shown in red. A new game then begins.