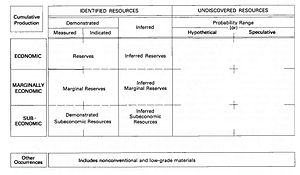 A "McKelvey diagram" showing the relationship of mineral resource classifications to economics and geologic certainty.[1]

Mineral deposits can be classified as:

In common mining terminology, an "ore deposit" by definition must have an 'ore reserve', and may or may not have additional 'resources'.

Classification, because it is an economic function, is governed by statutes, regulations and industry best practice norms. There are several classification schemes worldwide, however the Canadian CIM classification (see NI 43-101), the Australasian Joint Ore Reserves Committee Code (JORC Code), and the South African Code for the Reporting of Mineral Resources and Mineral Reserves (SAMREC)[2] are the general standards.

These classifications of mineral occurrences are generally the least important and least economic. They include all known occurrences of minerals of economic interest, including obviously uneconomic outcrops and manifestations. However, these are often mentioned in a company prospectus because of "proximity"; a concept that something valuable may be found near these occurrences because it has been in the past due to a similar geological environment. Often, such occurrences of mineralisation are the peripheral manifestations of nearby ore deposits. "Ore deposit" applies specifically to economic mineral occurrences that could be mined at a profit after consideration of all factors affecting a mining operation. Note that this distinction between amounts of raw material available as either a resource or reserve also applies to other materials considered to be minerals. This can include natural gas (legally defined as a mineral in some states of the United States) and hydrocarbons.

Mineral resources are those economic mineral concentrations that have undergone enough scrutiny to quantify their contained metal to a certain degree. None of these resources are ore, because the economics of the mineral deposit may not have been fully evaluated.

Indicated resources are simply economic mineral occurrences that have been sampled (from locations such as outcrops, trenches, pits and drillholes) to a point where an estimate has been made, at a reasonable level of confidence, of their contained metal, grade, tonnage, shape, densities, physical characteristics[3].

Measured resources are indicated resources that have undergone enough further sampling that a 'competent person' (defined by the norms of the relevant mining code; usually a geologist) has declared them to be an acceptable estimate, at a high degree of confidence, of the grade, tonnage, shape, densities, physical characteristics and mineral content of the mineral occurrence.

Resources may also make up portions of a mineral deposit classified as a mineral reserve, but:

Mineral reserves are resources known to be economically feasible for extraction. Reserves are either Probable Reserves or Proven Reserves. Generally the conversion of resources into reserves requires the application of various modifying factors, including: