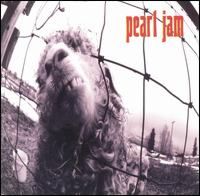 "Vs." is the second album by the American band , released on October 19, 1993 through . After a relentless touring schedule in support of its debut album, "Ten", released in 1991, the band headed into the studio in early 1993 facing the challenge of following up the commercial success of its debut. The resulting album, "Vs.", featured a rawer and more aggressive sound compared with the band's previous release.

Pearl Jam decided to scale back its commercial efforts for "Vs.", including declining to produce music videos for any of the album’s singles. Upon its release, "Vs." set the record for most copies sold in a week, a record that has since been broken. "Vs." occupied the number one spot on the "Billboard" 200 for five weeks, the longest duration for a Pearl Jam album. The album has been certified seven times platinum in the United States.

For its second album, Pearl Jam felt the pressures of trying to match the success of its debut album "Ten". In a 2002 interview, guitarist said, "The band was blown up pretty big and everything was pretty crazy."

The band took the approach of recording one song at a time, [Peiken, Matt. "Dave Abbruzzese of Pearl Jam". "". December 1993.] and agreed with O'Brien to mix the songs as each one was finished. O'Brien had the band members set up much as they do live,

The album featured a much looser and rawer sound compared with the band's debut album "Ten".

The songs on the album tackle personal as well as social and political concerns. Topics on the album include child abuse ("Daughter"), gun culture (""), police racism ("W.M.A."), and the media ("Blood"). "Glorified G", a song mocking gun enthusiasts, was inspired by an incident in which Abbruzzese told the band he had just bought two guns which sparked a conversation about guns within the band.

Paul Evans of "" gave "Vs." a favorable review. He said, "Few American bands have arrived more clearly talented than this one did with "Ten"; and "Vs." tops even that debut." He added, "Like and , Vedder makes a forte of his psychological-mythic explorations...As guitarists Stone Gossard and Mike McCready paint dense and slashing backdrops, he invites us into a drama of experiment and strife." of "" stated that "Pearl Jam uses its new album...to broaden its music," and added that "most of the album...projects individual misery as public catharsis."

Pearl Jam made a conscious decision beginning with the release of "Vs." to scale back its commercial efforts. [Ashare, Matt. "The Sweet Smell of (Moderate) Success". CMJ. July 2000.] The band declined to produce music videos after the very successful "Jeremy", and opted to give fewer interviews as well as make fewer television appearances. "Ten years from now," Ament said, "I don't want people to remember our songs as videos."

"Vs." included the hit singles "Go", "Daughter", "Animal", and "Dissident". All four placed on the "Billboard" Mainstream Rock and Modern Rock charts. "Daughter" was the most successful, reaching the number one spot on both the Modern and Mainstream Rock charts, spending a total of eight weeks at number one on the latter. Album tracks "" and "" also charted. In 1995, "Daughter" received a nomination for Best Rock Performance by a Duo or Group with Vocal and "Go" received a nomination for Best Hard Rock Performance. The album was nominated for the Grammy Award for Best Rock Album.

The picture on the front cover is of a sheep from a farm in Hamilton, . According to Ament, the cover was a representation of how the band felt at the time, with Ament stating "we were slaves." The album booklet contains additional drawings and writings by Vedder, including one page apparently d at a business meeting that says "I will never trust anybody again." The lyric page for "W.M.A." features a portion of a news story concerning , allegedly a victim of .

Originally, the album was titled "Five Against One" (The song "Animal" features the lyric "One, two, three, four, five against one..."). It was changed at the last minute, first to a self-titled album and then to "Vs.", a nod to the general theme of conflict present in most of the songs in the album. Referring to the title, Vedder said, "They were writing all these articles...Our band against somebody else's band. What the hell are they talking about? You know, don't try to separate the powers that be. We're all in this together." [Vedder, Eddie. "Rockline Interview". KISW-FM, Seattle, Washington. October 18, 1993.]

The decision to change the album's name at the last minute resulted in a few different versions of the record:
# Some of the first pressings of the cassette still contained "Five Against One" printed on the cassette itself.

There are also different versions that are unrelated to the title:
# The initial versions of the CD came in an Ecopak. While not rare, they went out of print quickly and are now hard to find. The song titles aren't printed on the back cover of this version, but the artwork remains the same. [cite web | url= http://www.pjcollectors.com/detail.asp?id=319 | title = Vs. | date = | accessdate = 2008-07-31 | publisher = Pjcollectors.com]
# The picture of the "elderly woman" changed at some point after the first pressings. Allegedly, the original woman never gave permission for her picture to be used, so Pearl Jam changed the picture to another woman. [Vedder, Eddie. (Speaker). (2003). "2/9/03, Brisbane Entertainment Centre, Brisbane, Australia" [Audio Recording] . Epic.] The difference is easy to spot, as "the new and improved woman behind the counter" is printed below the picture. [(2003) Album notes for "Vs." by Pearl Jam, [CD booklet] . New York: Sony Music.]
# The cover art on the vinyl copies is different from the CD and cassette.
# The lyrics to "Indifference" are only printed in the cassette version.

Pearl Jam promoted the album with tours of the in the fall of 1993 and the spring of 1994. [ [http://pearljam.com/tour/shows.php Pearl Jam: Set Lists] . pearljam.com.] The fall 1993 tour focused on the , while the spring 1994 tour focused on the . Industry insiders compared Pearl Jam's tour to the touring habits of , in that the band "ignored the press and took its music directly to the fans." During this tour the band set a cap on ticket prices in the attempt to thwart scalpers. [DeRogatis, Jim. "Milk It!: Collected Musings on the Alternative Music Explosion of the 90's". Cambridge: Da Capo, 2003. ISBN 0-306-81271-1, pg. 58–59]

Several songs from the band's third album, "", were premiered during this tour. The band's April 3, 1994 concert in Atlanta, Georgia was broadcast live on the radio in the United States. [ [http://www.monkeywrenchradio.org/radiowaves/19940403.html "Are we on the air? Wow!"] monkeywrenchradio.org.] A few days later, the body of Nirvana frontman was found in his home due to an apparent suicide. This deeply affected Vedder, who later said that "the day that we found out about Kurt...I was just spinning."

Two songs were rejected from the album that later appeared on the band's follow-up "", "Whipping" and "". Both songs made their live debuts at the band's May 13, 1993 concert in San Francisco where the band premiered most of the newly recorded songs for "Vs." [cite web| url=http://www.pearljam.com/tour/setlist.php?date=199305130000| title= Pearl Jam Shows:1993 May 13, Slim's Café San Francisco, California] "Better Man" was said to have been rejected because Vedder was not comfortable with the song's accessibility. Another song that was recorded during the album's sessions is "Hard to Imagine".