"Cassia humilis" redirects here. This taxon may also refer to other species; see below. 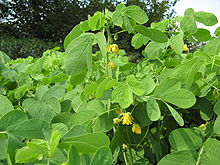 Senna obtusifolia (Chinese Senna or Sicklepod) is a legume in the genus Senna, sometimes separated in the monotypic genus Diallobus. It grows wild in North, Central, and South America, Asia, Africa, and Oceania, and is considered a particularly serious weed in many places. It has a long-standing history of confusion with Senna tora and that taxon in many sources actually refers to the present species.

Its leaves, seeds, and root are used in folk medicine, primarily in Asia. It is believed to possess a laxative effect, as well as to be beneficial for the eyes. As a folk remedy, the seeds are often roasted, then boiled in water to produce a tea. The plant's seeds are a commercial source of cassia gum, a food additive usually used as a thickener and named for the Chinese Senna's former placement in the genus Cassia. Roasted and ground, the seeds have also been used as a substitute for coffee. In traditional Korean medicine, they are called gyeolmyeongja (결명자) and usually prepared as tea. They are also used in Kampō (traditional Japanese medicine) where they are called ketsumei-shi (ケツメイシ, 決明子) or by their Chinese name jué míng zǐ (traditional: 決明子, simplified: 决明子).

This plant is a conspicuous member of the flora of its native home. It evoked powerful images to the celebrated Tang Dynasty poet Du Fu (杜甫), who in one of his "Sighs of Autumn Rain" poems (Qiū yǔ tàn, 秋雨叹) discussed it thus:[1]

In autumn rain, the grasses rot and die, / Below the steps, the Chinese Senna's colour is fresh.
Full green leaves cover the stems like feathers, / And countless flowers bloom like golden coins.
The cold wind, moaning, blows against you fiercely, / I fear that soon you'll find it hard to stand.

Upstairs the scholar lets down his white hair, / He faces the wind, breathes the fragrance, and weeps.

Names in its native range are also: 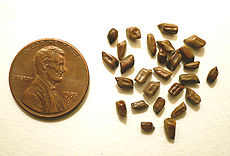 Chinese Senna has been treated under a wide range of scientific names. Some are synonyms of Senna obtusifolia, others are names that have been applied to it in error. In addition, several of these names may also refer to related plants. In particular, the distinction between this species and Senna tora was fraught with errors and misunderstandings:[2]

Cassia humilis Steud. is a synonym of Chamaecrista kunthiana
Cassia numilis Collad. is apparently a misprint and refers to Senna tora

Cassia tora L. is a synonym of Senna tora