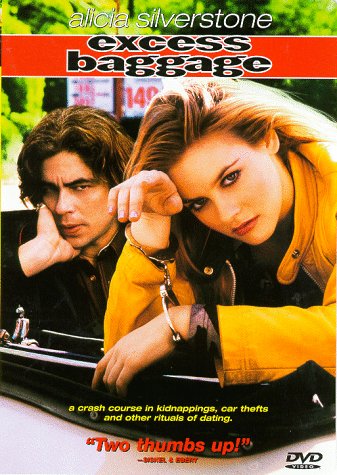 "Excess Baggage" is an American movie from 1997, directed by .

Emily Hope () stages her own to get the attention of her father. She puts herself into the trunk of her own car, tapes her legs and mouth, handcuffs her hands and calls the police so they can come “rescue” her. But then, unexpectedly, a car thief named Vincent Roche () steals the car with her in it. Suddenly Emily finds herself actually kidnapped, only the kidnapper doesn’t know what to do with her.
shows up as Emily’s Uncle Ray, Jack Thompson as Emily’s father, and Harry Connick, Jr., as Greg, Vincent’s car-stealing partner.

*Emily Hope (): Emily is a rich girl with a black belt in karate and a tendency for trouble. It is established during the movie that she burned down her school library, perhaps to get the attention of her father when she was younger. Her relationship with her father is quite cold, but she has a solid friendship with her Uncle Ray and builds one with Vincent after he accidentally abducts her.

This was the first film produced by Alicia Silverstone (uncredited) and her production company "First Kiss". The yellow leather jacket worn by Silverstone's character was sold to actor/stand-up comic Paul Rawson for $890. The jacket also came with Silverstone's black suede pants and lipstick print t-shirt. [ [http://www.imdb.com/title/tt0119086/trivia Trivia for Excess Baggage] ] Silverstone was nominated for a

*Vincent Roche (): Vincent Roche is a successful and experienced carjacker who supports himself with his work. He is referred to as "an innocent thief" who happens to steal the car with Emily in the trunk. After this his entire life is turned upside down as he gets implicated in several schemes and becomes dependent on his "hostage" to survive.

*Raymond "Uncle Ray" Perkins (): Ray is Emily's uncle and cares for her well-being much more than her own father. He also suspects that this kidnapping situation is not a real kidnapping and might be one of Emily's "games." His first encounters with Vincent are rather hostile but the two eventually form a camaraderie.

Christopher Walken plays an important role in this film. He starred with in two other films, "" and "The Funeral". He also starred in "" with two years later. "I don't know why everybody thinks he's so crazy," Silverstone noted. "I think he seems so adorable. I think maybe I was his mom in a past life or something."

*Greg Kistler (): Greg is Vincent's partner in crime but it appears that Vincent does most of the work. They steal cars and sell them to people like Gus and Stick, which eventually lands them into trouble when their operation is burned down and Vincent is on the lam.

*Alexander T. Hope (Jack Thompson): Hope is Emily's father and a very rich and successful businessman. He doesn't pay much attention to his daughter and it is hinted that his business deals may be corrupt.

*Stick () and Gus (Michael Bowen): Two hoodlums who have had business transactions which Vincent and Greg but eventually turn on them.

*Louise Doucette (): A bartender/waitress at a cafe near Vincent's home. Uncle Ray gets information about Vincent from her during his investigation of the kidnapping. She only appears in two scenes.

*Bernaby and Sims ( and Robert Wisden) are detectives who are investigating the kidnapping of Emily.

The film features by voice-actor , April Telek and Matthew Robert Kelly, all of them uncredited.