Jean Drapeau
For other people with the surname Drapeau, see Drapeau (surname). 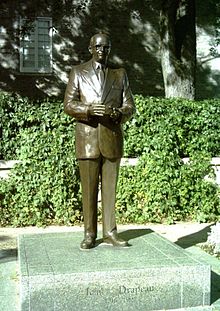 Jean Drapeau, CC, GOQ (18 February 1916 – 12 August 1999) was a Canadian lawyer and politician who served as mayor of Montreal from 1954 to 1957 and 1960 to 1986. During his tenure as mayor he was responsible for the construction of the Montreal Metro system and the Place des Arts concert hall, for conceiving Expo 67, for securing the 1976 Summer Olympics, and for helping to bring Major League Baseball to Montreal with the creation of the Montreal Expos.

Although he is remembered as a visionary, Drapeau's mishandling of the construction of the Olympic Games facilities resulted in massive cost overruns and left the city with a debt that has taken its citizens over thirty years to fully pay off.

The son of Joseph-Napoléon Drapeau and Alberta (Berthe) Martineau, Jean Drapeau was born in Montreal in 1916. His father, an insurance broker, city councillor and election worker for the Union nationale, introduced him to politics. Jean Drapeau studied law at the Université de Montréal.

Drapeau was a protégé of nationalist priest Lionel Groulx in the 1930s and 1940s,[1] and was a member of André Laurendeau's anti-conscription Ligue pour la défense du Canada. In 1942, he ran as a candidate of the nationalist Bloc Populaire, which opposed Canadian conscription during World War II, in a federal by-election (see Second Conscription Crisis). Drapeau lost the election. He was also a Bloc populaire candidate in the 1944 provincial election but was badly defeated in his Montreal constituency.[1]

He began his practice as a criminal lawyer in Montreal in 1944. During the Asbestos Strike of 1949, he took on the legal defence of some of the strikers.[1]

In 1945, he married Marie-Claire Boucher. They had three sons.

Jean Drapeau's profile grew as the result of his role in a public inquiry led by Pacifique Plante into police corruption in the early 1950s. When Camillien Houde retired as mayor of Montreal, Drapeau was well poised to succeed him.[1]

Drapeau was elected mayor of Montreal in 1954 at the age of 37, as the candidate of the Civic Action League, on a platform of cleaning up the administration. In 1957, he lost to Sarto Fournier who was backed by the powerful Premier of Quebec Maurice Duplessis,[1] but Drapeau was elected again in the election of 1960, and from then he was re-elected without interruption until he retired from political life in 1986. His long tenure would eventually turn the Parti Civique into his personal fief, with no clear heir.

During Jean Drapeau's tenure as mayor, he initiated the initial construction of the Montreal Metro subway system, Place des Arts, and Expo 67, the Universal Exposition of 1967.[1] To support the expenditures, Drapeau created the first public lottery in Canada in 1968, which he called simply a "voluntary tax", an idea that would later gain favor and become enlarged by the provincial government by creating Loto-Québec society in 1970.

In the municipal elections of October 1970, Drapeau used the proclamation of the War Measures Act and the October Crisis to discredit and neutralize the candidates of the opposition party by accusing them of being terrorist sympathisers and supporters of the Front de libération du Québec. Some opposition candidates, including his main opponent, were imprisoned only to be released after the end of the election in which Drapeau's party won all 52 seats.[1]

The 1970s saw the preparation of the 1976 Summer Olympics. Cost overruns and scandals forced the Quebec government to take over the project. The Summer Games were also marked by Drapeau's controversial decision to dismantle the Corridart public art display just before the Games. [1]

Public criticism of Drapeau's municipal administration grew and lead to the creation of a new opposition party in 1974, which gradually grew in popularity over the next decade. Drapeau did not seek re-election in the election of 1986, which was won by the opposition. Canadian Prime Minister Brian Mulroney appointed Drapeau to the position of Canadian ambassador to UNESCO in Paris.[1]

Despite the nationalism of his youth, Drapeau remained neutral during the 1980 Quebec referendum.[1]

In 1967, Drapeau was made a Companion of the Order of Canada and received the Royal Architectural Institute of Canada’s Gold Medal.[2] He was named a Grand Officer of the National Order of Quebec in 1987.

After his death in 1999 (at age 83), Drapeau was interred in the Cimetière Notre-Dame-des-Neiges in Montreal.

One of the biggest parks in Montreal, Parc Jean-Drapeau, composed of Île Notre-Dame and Ile Sainte-Hélène in the middle of the Saint Lawrence river, site of the universal exposition of 1967, was renamed in his honour, as was the Metro station serving the park.

Drapeau said "The Olympics can no more lose money than a man can have a baby."[3] after announcing the budget for the Montreal Olympic games. Following the Olympics, the city was left with a debt of $1 billion. Aislin published a famous political cartoon depicting a pregnant Drapeau on the phone, saying "'Ello, Morgentaler?", referring to a prominent Montreal physician who performed abortions.

One opponent called him "a combination of Walt Disney and Al Capone."

His critics described most of his projects as circuses. Drapeau replied: "What the masses want are monuments."