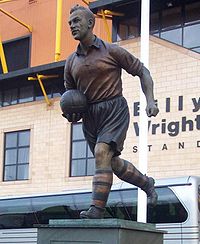 The Billy Wright statue outside Molineux

/ˈmɒlɨnjuː/ mol-i-new) is a Premier League football stadium situated in Whitmore Reans, Wolverhampton, England. It has been the home ground of Wolverhampton Wanderers Football Club since 1889, and has a long and illustrious history as the first 'new build' stadium in Football League history,[2] one of the first grounds in the country to install floodlights, as well as hosting some of the first European club games in the 1950s.

At the time of its multi-million pound renovation in the early 1990s, Molineux was one of the biggest and most modern stadia in England, though it has since been eclipsed by many other ground developments. The stadium has however hosted England internationals and, more recently, England under-21 internationals, as well as the first UEFA Cup Final in 1972. Although currently a 29,195 seater stadium, the record attendance at Molineux stands at 61,315.

Plans were announced in May 2010 to rebuild two sides of the stadium by the 2014–15 season to increase capacity to around 36,000. The first stage of this project began in Summer 2011. There are also provisional future plans for a longer term redevelopment of every stand that could potentially create a 50,000 capacity.[3]

The stadium is located a few hundred yards north of Wolverhampton city centre, at the far side of the city's ring road, and is a prominent building due to its size in an area with predominantly low-rise buildings. It consists of four stands: the Steve Bull Stand (formerly the John Ireland stand), the Jack Harris Stand, the Stan Cullis Stand and the Billy Wright Stand. Both the Billy Wright and Stan Cullis stands feature statues of each man in front of them.

The total seated capacity of the stands is approximately 28,525, with a temporary seating area lifting the present official capacity to 29,195. The current stadium design stems from the early 1990s when it was extensively redeveloped to become a modern all-seater venue in accordance with the Taylor Report, which required British football stadia to provide seating for all those attending.

In the days before seating regulations, the ground could hold more than 60,000 spectators; the record attendance for a match at the ground is 61,315 for a Football League First Division game against Liverpool on 11 February 1939. The 1940s and 1950s saw average attendances for seasons regularly exceed 40,000, coinciding with the club's peak on the field.

The Molineux name originates from Benjamin Molineux, a successful local merchant (and a distant relative of the now extinct Earls of Sefton) who, in 1744, purchased land on which he built Molineux House (later converted to the Molineux Hotel) and on which the stadium would eventually be built. The estate was purchased in 1860 by O.E. McGregor, who converted the land into a pleasure park open to the public. Molineux Grounds, as it was titled, included a wide range of facilities including an ice rink, a cycling track, a boating lake and, most crucially, an area for football.

The grounds were sold to the Northampton Brewery in 1889, who rented its use to Wolverhampton Wanderers, who had previously lacked a permanent home. After renovating the site, the first ever league game was staged on 7 September 1889 in a 2–0 victory over Notts County before a crowd of 4,000.

Wolves bought the freehold in 1923 for £5,607 and soon set about constructing a major grandstand on the Waterloo Road side (designed by Archibald Leitch). In 1932, the club also built a new stand on the Molineux Street side and followed this with adding a roof to the South Bank two years later. The stadium finally now had four stands, which formed Molineux for the next half century.

In 1953, the club became one of the first to install floodlights, at a cost of around £10,000. The first ever floodlit game was held on 30 September 1953, as Wolves won 3–1 against South Africa. The addition of the floodlights opened the door for Molineux to host a series of midweek friendlies against teams from across the globe. In the days prior to the formation of the European Cup and international club competitions, these games were highly prestigious and gained huge crowds and interest, the BBC often televising such events. A new taller set was later installed in 1957, at a cost of £25,000, as the stadium prepared to host its first European Cup games.

The Molineux Street Stand (by now all-seater) failed to meet the standards of the 1975 Safety of Sports Grounds Act. The club set about building a new stand behind the existing one, on land where housing had been demolished. The new stand, designed by architects Atherden and Rutter, had a 9,500 capacity, equipped with 42 executive boxes, although sporting red seats in contrast to the club's traditional colours. When the construction was complete, the old stand lying in front was demolished. This new stand, named the John Ireland Stand (after the then-club president), was opened on 25 August 1979 at the start of a First Division game against Liverpool.

The pitch was not moved following this development and so the stand was some 100 ft from the touchline. The project had cost £10 million and been one of the most expensive developments at any football ground and the cost of its construction plunged Wolves deep into debt and they narrowly avoided liquidation in 1982, when taken over by a group fronted by former player Derek Dougan. By the time Wolves slid into the Fourth Division in 1986, the John Ireland Stand and the South Bank terrace were the only sections of the ground in use, after new safety laws implemented following the Bradford City stadium fire forced the closure of the North Bank and Waterloo Road Stand, which were very dilapidated. As well as that, attendances had fallen due to the club's on-the-field decline.

The club's perilous financial situation meant the stadium fell into ruin, with no funding either for repairs or to move the pitch. The club was saved from folding in August 1986 when Wolverhampton Council bought the ground for £1.12 million, along with the surrounding land, while Gallagher Estates, in conjunction with the Asda Superstore chain, agreed to pay off the outstanding debt – subject to building and planning permission for a superstore being granted. Although the stadium continued in use, the disused sections were never reopened.

The takeover of the club and stadium by Sir Jack Hayward in 1990 paved the way for redevelopment, which was further prompted by legislation following the Taylor Report that outlawed terraces which affected Premier League and Division One stadiums from the 1993–94 season.

The North Bank terrace was demolished in October 1991, and, the following summer, the new Stan Cullis Stand was completed in August 1992, in time for the 1992–93 season. Next came the demolition of the Waterloo Road Stand, with the new Billy Wright Stand opening in August 1993. The final phase of the redevelopment came in December 1993, when the new Jack Harris Stand was opened on the site of the South Bank terrace.

The newly-renovated stadium was officially opened on 7 December 1993, in a friendly with Honvéd, the Hungarian team who had been beaten in one of Molineux's most famous original floodlit friendlies. Molineux, with an all-seated capacity of 28,525, was then one of the largest stadiums in England, although this figure has since been exceeded by other new or revamped stadia.

In 2003, the John Ireland Stand was renamed the Steve Bull Stand (in honour of the club's highest goalscorer of all time), and at the same time the south-west corner of the ground was filled with 900 temporary seats, known as the Graham Hughes Stand, which, until their removal in the summer of 2006, raised the Molineux capacity to 29,400.[4] This expansion occurred when Wolves were promoted to the Premier League, and allowed the club to set a record crowd for the redeveloped stadium of 29,396 on 17 January 2004, when they defeated Manchester United 1–0. This seating area – now officially named the Wolves Community Trust Stand – has again been added since the club's return to the top flight in 2009, which lifted the capacity to 29,195 before the club began its redevelopment of the stadium in summer 2011.

Plans were announced in May 2010 to begin an extensive multi-million pound programme of redevelopment to enlarge the stadium's capacity and develop its facilities.[3] A full application for planning permission was submitted in September 2010,[5] and granted three months later.[6]

Phase 1 of this process was confirmed in February 2011,[7][8] and commenced on 23 May 2011 as demolition of the Stan Cullis Stand began. In its place will be a new two-tier stand (seating 7,700), complete with mega-store, museum, café, hospitality facilities and video screen, that will be officially opened for the 2012–13 season. The stand will extend around into the north east corner – currently open space – to house away fans in this spot. Stadium capacity at the end of this phase will be approximately 31,700.[7]

This phase, costing an estimated £16 million, is being carried out by contractors, the Buckingham Group.[9] The lower tier was opened to fans during September 2011, creating the current stadium capacity of 27,828.[10][11] Phase 1 is scheduled to be fully completed by July 2012.[12]

Phase 2 will be the rebuilding of the Steve Bull Stand over a two-season period (2012–13 and 2013–14), scheduled to be fully completed for the 2014–15 season (although some areas may already be available to fans during the 2013–14 season). When finished, this will increase stadium capacity to around 36,000 and see the stand connected to the new Stan Cullis Stand. The stand will feature numerous corporate and hospitality facilities to help increase non-matchday business. Proceeding with this second stage would raise the redevelopment spend to in excess of £40 million.

Phase 3 is subject to demand and finance, but is planned to be the construction of a new top-tier on the Jack Harris Stand, that will connect it to the new Steve Bull Stand. This would bring capacity up to around 38,000.

Phase 4 is a tentative plan to completely redevelop the Billy Wright Stand in a move that would bring capacity to 50,000. However, no planning permission will yet be sought for this phase and it remains only a potential, rather than planned, development with no timeframe in place.