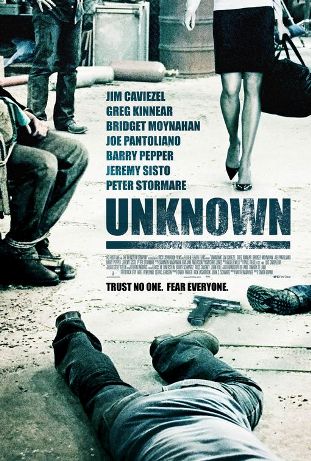 "Unknown" (n title: "Mentes en Blanco") is a 2006 film directed by Colombian filmmaker Simon Brand and stars , , , and about a group of men kidnapped and locked in a factory. Piecing together information around them, they realize that some were kidnapped and some were the kidnappers. They decide they must work together to figure out how to get away before the gang that captured them returns.

The film was previewed before a theater audience for the first time in on , . It was then released straight to DVD on , . It is currently unrated by the .

Five men desperately try to recover their memories and piece together the traumatic events of the past several days in this independent thriller. In an abandoned warehouse, a handful of men slowly regain consciousness, but they’ve been stricken with amnesia and have no idea who they are, where they are, or what has happened to them. All five seem to have been in some sort of serious scuffle; one is tied up (Joe Pantoliano), another has been handcuffed (Jeremy Sisto), a third has a broken nose (Greg Kinnear), and the other two have their share of scrapes and bruises (Jim Caviezel and Barry Pepper). As the men compare the tiny shards of memory they can pull from their minds, one finds a newspaper from two days before which features a front-page story about the kidnapping of a wealthy and well-known businessman. The men begin to suspect that they were involved with the kidnapping, but no one is sure if they’re on the right or wrong side of the law – or if one of them might happen to be the victim. The first feature film from veteran music video director Simon Brand, Unknown also stars Peter Stormare, Bridget Moynahan and Clayne Crawford.