, then commonly-accepted process capability indices include:

far from T) or with high variation.

Fixing values for minimum "acceptable" process capability targets is a matter of personal opinion, and what consensus exists varies by industry, facility, and the process under consideration. For example, in the automotive industry, the AIAG sets forth guidelines in the Production Part Approval Process, 4th edition for recommended Cpk minimum values for critical-to-quality process characteristics. However, these criteria are debatable and several processes may not be evaluated for capability just because they have not properly been assessed.

At least one academic expert recommends[3] the following:

It should be noted though that where a process produces a characteristic with a capability index greater than 2.5, the unnecessary precision may be expensive[4].

Relationship to measures of process fallout

The mapping from process capability indices, such as Cpk, to measures of process fallout is straightforward. Process fallout quantifies how many defects a process produces and is measured by DPMO or PPM. Process yield is, of course, the complement of process fallout and is approximately equal to the area under the probability density function

if the process output is approximately normally distributed.

In the short term ("short sigma"), the relationships are:

In the long term, processes can shift or drift significantly (most control charts are only sensitive to changes of 1.5σ or greater in process output), so process capability indices are not applicable as they require statistical control.

Consider a quality characteristic with target of 100.00 μm and upper and lower specification limits of 106.00 μm and 94.00 μm respectively. If, after carefully monitoring the process for a while, it appears that the process is in control and producing output predictably (as depicted in the run chart below), we can meaningfully estimate its mean and standard deviation. 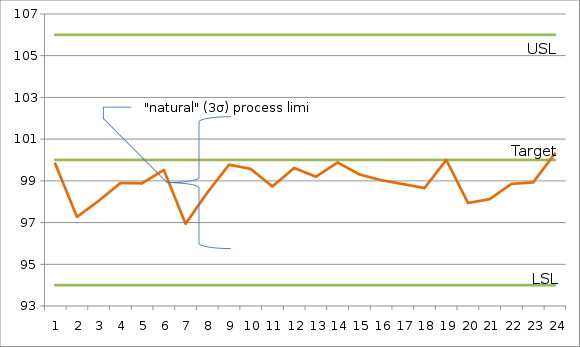 The fact that the process is running off-center (about 1σ below its target) is reflected in the markedly different values for Cp, Cpk, Cpm, and Cpkm.