The Chemin de fer de Petite Ceinture (French for "little belt railway") was a Parisian railway that, from 1852, was a circular connection between Paris' main railroad stations within the fortified walls of the city. In a partial state of abandonment since 1934, the tracks (and some stations) still remain along much of its right-of-way, and the future of its yet-undeveloped property is the subject of much debate as of 2011. Many French railway enthusiasts nostalgically regard the Petite Ceinture as a surviving element of bygone era, and there are several associations whose aim is to protect the abandoned railway and its remaining stations as part of France's national heritage.

Paris' Chemin de Fer de Petite Ceinture was military in origin. A lack of protection around France's principal cities was largely blamed for France's defeat by the Prussian armies in the 1814-1815 wars, and rail transport (a recent invention) was held in high esteem by France's military for its ability to quickly transport troops and material throughout the country. Paris' future circular railway was a meeting of these ideas. 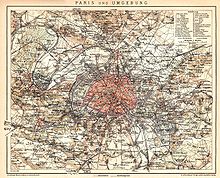 Paris was only half its present size when France's government adopted Prime Minister Adolphe Thiers' project for a ring of fortifications and forts around Paris on 1 February 1841. Echoing the path of the city's 1784 Fermiers-Généraux tax wall (following, almost exactly, today's metro lines 6 and 2), the fortifications created a second, larger and better-fortified ring of protection around the city. At the time of its construction, the land between the two walls (except a strip of noisy tax-free-territory bars and cabarets just outside the city gates) remained a quiet landscape little marred by construction.

Rail transportation was developing in many regions of France, but in 1848 the government (then under the Bourbon king Louis-Philippe's rule) decided to direct all future rail development toward its centralist goals. From that year, Paris became the centre and meeting place of all France's railways in a star-shaped railway plan radiating from the capital throughout France.

1848 was also a year of revolution in France and throughout Europe: the Second Republic (which followed the Bourbon regime) found it could not afford to finance the former government's railway plans. Despite the regime change, both rail transport and Paris' fortifications remained pressing matters to France's generals; it was essential that rail transport provide logistical support to Paris' fortifications wall and its several surrounding fortresses for the efficient movement of troops, supplies, arms and ammunition.

In 1848, Paris had five major stations run by five railway companies: Paris-Rouen (later Ouest, near today's gare Saint-Lazare, Nord (at today's gare du Nord), Paris-Strasbourg (later Est, at today's gare de l'Est), Paris-Lyon (at today's gare de Lyon) and Paris-Orléans (at today's gare d'Austerlitz). Each company maintained routes extending to different (but never intersecting) points in France. All were persuaded that direct connection to a competing line would endanger their regional monopolies. This situation made interchange between the companies and neighboring regions long and onerous. Both freight and passengers had to travel via the congestion of the capital; in some cases, they had to travel significant distances simply to transfer between competing lines. The divided regional monopolies of France's railway network were especially frustrating for the military, as they sought the speed and efficiency of rail service to get troops and supplies quickly to all parts of France.

Even at that early stage of France's railway development, the government was courting the rail companies for their participation in a plan to build a circular railway inside Paris' fortifications. Unfortunately, all the short-lived Second Republic managed to do (with coercion and blackmail) before its fall was to motivate the private companies to make merger and private deals among themselves.

Napoleon III's rise to power on 2 December 1851 ushered in a new government with more grandiose visions for France's railway future. In an effort to accelerate France's rail development to a pace comparable with that of the rest of western Europe, the new government renewed many of France's railway concession offers on new and more financially-advantageous terms. Paris' circular railway was one of these deals, and the government had obtained concession agreements from the Rouen, Nord, Strasbourg, Orléans (bankrupt, but state-sponsored) and Lyon companies by 10 December.

The plan was to connect all of Paris' main stations through a railway running from the Rouen company lines (north of today's Gare St-Lazare) to the Orléans company's gare d'Ivry freight yards (near today's Gare d'Austerlitz). As the concession stipulated that all of Paris' stations be connected, a solution had to be found for the only station that would not have lines intersecting the Ceinture's initial path - the old Ouest Paris – Versailles Rive Gauche station (near today's Gare Montparnasse). This was done through a junction with the Paris – Versailles Rive Droite line (from today's St-Lazare station) where they met in the southwest of the city, near the town of Viroflay.

The Ceinture concession agreement stated that the government would finance the landscaping, bridges and rails for the line. All would be placed at the disposal of the private companies for a period of 99 years, instead of the former government's 45-year offer. This period would date from the completion of the new line. As for the private companies, they would contribute ₣ 1,000,000 each, build the stations, provide power and rolling stock, and cover operating expenses. The delay for the railway's completion was set at two years, at which time the new line was to be ready to accommodate freight and passenger traffic. Although the state financed construction of the line, management was confined to a syndicate composed of two members from each company (known as the Syndicat de Chemin de fer de Ceinture).

Because of an earlier deal (until then, forbidden by the government as coercive against Ceinture contract negotiations), the interchange connections began with a direct connection between the Nord and Strasbourg (Est) route stations in April 1852. This rail arc was private, and would later be connected to the Ceinture line. The first length of Ceinture rail (between Rouen's Batignolles and Nord's La Chapelle freight yards) was opened on 12 December 1852. A second section, between Pont du Nord (La Chapelle) and Aubervilliers (a point where the Nord-Strasbourg private junction joined the Ceinture railway), was opened on 30 September 1853. Trains could now run between the Batignolles, La Chapelle and (Strasbourg's) La Villette freight yards.

The contract for the line between Pont du Nord and La Chapelle was given to the Est company in November 1853, and by 25 March 1854 the line was completed from La Chapelle to Ivry. Extensive work beginning then on other parts of the line included a long viaduct (more than 700m) near Pont de Flandre; tunnels measuring 1km each in length had to be dug under the hills of Belleville and Charonne. In 1855, new freight yards were opened at Charonne and La Villette. 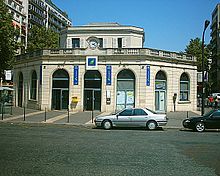 As the Chemin de fer de Ceinture fulfilled the State's goal of uniting all France's railways in the capital, the Pereire-owned Ouest company's 1852 demand for a concession for a railway inside the fortifications around the western rim of the city was originally treated as a project in itself, although the government saw it as an addition to its plan to create a rail ring around Paris. Joining the Rouen (St.-Lazare) station and its terminus in the still-suburban bourgeois town of Auteuil to the city's southwest, this passenger line was created as a means for well-to-do Parisians to travel to their country homes.

Unlike the Chemin de fer de Ceinture, the Paris – Auteuil line was designed for passenger service only. In an effort to avoid any impediment to Paris' traffic circulation, it was built below grade for most of its 9.5km length, requiring 14 bridges. Besides its rue St-Lazare embarcadère (the 'head' station, also serving the Ouest company's other lines), the line had five stations: Pont-Cardinet (an SNCF station today), Courcelles (today's Pereire - Levallois RER C station), Neuilly-Porte Maillot, Avenue de l'Impératrice (Avenue Foch), Passy (Avenue Henri-Martin) and Auteuil (unused today). The Paris-Auteuil passenger line was inaugurated on 2 May 1854 and began service on 5 June.

After the 1854 completion of the Paris – Auteuil line, Paris' Right Bank was surrounded inside its fortifications by rail, but at that time no company saw a commercial future in constructing a similarly-located Left Bank rail line connecting the Right Bank line terminals: creating a true "belt" around Paris. The Right Bank line already connected all of Paris' railway stations except the Left Bank's Paris – Versailles (Rive Gauche) line (already connected with the Paris – Versailles Rive Droite line at a junction in the southwestern suburban town of Viroflay).

The Ouest company eventually agreed to undertake construction of the Ceinture Rive Gauche, probably because they were the only company serving Paris' Versailles Rive Gauche (Montparnasse) station. In the agreement, in addition to the fortification-hugging Left Bank line, the Ouest company was to manage a direct connection between the Chemin de fer de Ceinture and the Paris – Auteuil lines, and build a temporary rail line between the western terminus of the Left Bank line and the Champ de Mars. The project was to be completed in time for the 1867 Universal Exposition.

Construction ended on 27 February 1867; the last portion of track the linked the line from Javel to Champs de Mars in time for the Exposition. The Petite Ceinture was looped on 25 March 1869, with the opening of the line between Courcelles and Clichy, and was built under the St Lazare main line. For the 1889 Universal Exposition, many level crossings were removed. The last extension of the Petite Ceinture was the junction line from Champs de Mars to Passy for the 1900 Universal Exposition. Traffic gradually diminished until the lines closed – the Champs de Mars branch in 1924 and the PC (Petite Ceinture) in 1934. Only the Ligne d'Auteuil (electrified in 1925) would remain open.

View along the abandoned rails under the rue Raymond Losserand

The Petite Ceinture is largely unused. The last portion to be in regular use was the Ligne d'Auteuil until 1985. The connection between Gare du Nord and Gare de l'Est was in use until the 2000s but (as of 2011) has seen use fall dramatically. Passenger and freight service from both stations are hauled by engines from the SNCF depots at La Chapelle and Pantin, seldom exchanging rolling stock. The Grande Ceinture is currently used to swap stock and as a diversion line.

Plans were afoot to use parts of the Petite Ceinture as a tramway (now called Line 3), but the Boulevards des Maréchaux (Boulevards of the Marshals, a ring of boulevards encircling Paris) has been used instead. The line opened on 16 December 2006. 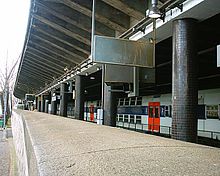 Champ de Mars Station in 2006; the line is now covered and the above road widened

The Ligne d'Auteuil closed in 1985 to make way for the newly-opened Réseau Express Régional (RER) C line. The RER C has been extended to Montigny-Beauchamp and Argenteuil after the construction of a new tunnel crossing northwest Paris. The line branches off at Champ de Mars, crossing the Seine. From there the line is underground; the Ligne d'Auteuil was covered in 1988, and the line between Henri Martin and Courcelles was reduced from four tracks to two. It exits Paris in a tunnel ending in Clichy.