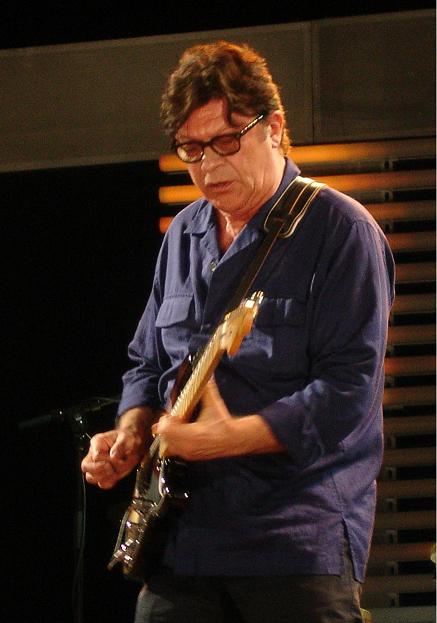 Born to a ish father and a Mohawk mother (he took his stepfather's last name after his mother remarried), Robertson had his earliest exposure to music at , where he spent summers with his mother's family. He studied from his youth and has been writing songs and performing since his teen years.

By 1958, Robertson was performing in various groups around , including . By 1959 he had met singer , who headed up a band called The Hawks (after relocating to ). In 1960 Hawkins recorded two early Robertson songs ("Hey Boba Lu" and "Someone Like You") on his Mr. Dynamo LP. Robertson then took over lead guitar with The Hawks and toured often, before splitting from Hawkins in 1963. Robertson appears on several of Ronnie Hawkin's albums and compilations.

The quintet styled themselves as The Canadian Squires and Levon and the Hawks [http://www.canoe.ca/JamMusicPopEncycloPagesR/robertson.html] , but (after rejecting such names as The Honkies and The Crackers) ultimately called themselves .

hired The Band for his famed, controversial tour of 1966, his first wide exposure as an electrified performer rather than his earlier acoustic folk sound. Robertson's distinctive guitar sound was an important part of the music; Dylan famously praised him as "the only mathematical guitar genius I’ve ever run into who doesn’t offend my intestinal nervousness with his rearguard sound."

From their first album, "" (1968), The Band was praised as one of 's preeminent groups. "" magazine praised The Band and gave its music extensive coverage. Robertson sang only a few songs with The Band, but was the group's primary songwriter, and was in the later years of the Band often seen as the bandleader.

In 1976, The Band broke up due to the stresses of sixteen years of touring. In the Martin Scorsese film "" (1978) Robertson noted that he had been playing live music almost since rock and roll began. Also, credited officially as the band's main songwriter, he was able to live off the song , and no longer needed to tour. The Band reformed in 1983 without Robertson.

Robertson produced Neil Diamond's albums Beautiful Noise in 1976 and Love At The Greek (live) in 1977.

In 1978 The Band Released Anthology, Vol. I a greatest Hits album.

Between 1979 and 1980 Robertson co-starred with Gary Busey and Jodie Foster in Carny. He also co-wrote, produced, and composed source music for the film. Inspired by Carny soundtrack composer Alex North, with whom he worked, Robertson became one of the first rock 'n' rollers to seriously engage the medium of film. For Scorsese's Raging Bull, Robertson created background music and produces source music. Released is The Band's Anthology, Vol. II.

Between 1982 and 1986 Robertson managed to stay quite busy. For another Scorsese film, King Of Comedy (released the following year), Robertson serves as music producer, assembling tunes by The Pretenders, Talking Heads, Ray Charles, Rickie Lee Jones and others. He also contributes with his first post-Band solo recording, "Between Trains." Additionally, he produced and played guitar on Van Morrison's "Wonderful Remark." Robertson signed via A&R executive Gary Gersh for his debut solo album on Geffen Records. Robertson recorded with producer (and fellow Canadian) Daniel Lanois. He also scores Scorsese's The Color Of Money working with Gil Evans and co-wrote with Eric Clapton (It's In The Way That You Use It") and Willie Dixon.

From 1987 onwards, Robertson released a series of four solo s that began with a self-titled album. In 1990, he contributed to ese 's album "Beauty". Robertson's song "Broken Arrow", off the "Robbie Robertson" album, was covered by on his album "" and became a hit single. "Broken Arrow" was also a part of the Grateful Dead's rotation of live songs 1993-95 (sung by bassist Phil Lesh), and later with Phil Lesh and Friends.

In 1996, Executive soundtrack producer Robertson hears a demo of "Change The World" and sends it to Clapton as a suggestion for the soundtrack to Phenomenon, starring John Travolta. He then enlists Babyface to produce the track. "Change the World" wins 1997 Grammy® Awards for Song of the Year and Record of the Year.

In 1997, Robertson receives a prestigious Lifetime Achievement Award from the National Academy of Songwriters.

From 1997 to 2000, Robertson stayed busy with side projects and documentaries.

At the 2003 commencement ceremonies at in , Robertson delivered an address to the graduating class and was awarded an by the university. In 2006, he announced plans to write his .

In 2003, Robertson was inducted into [http://www.canadaswalkoffame.com/inductees/03_robbie_robertson.xml.htm Canada's Walk of Fame] .

On ,, at 's in Bridgeview, Ill, Robertson made a rare appearance on stage and played briefly.

According to an article in the edition of the , Robertson is said to be working with on an album of new material.

was hired to direct "" based on his use of music in "". The two lived together during the editing of "Waltz" and became friends. Scorsese had later admitted that during the editing process, the two of them heavily used drugs. Scorsese hired Robertson to compose the for his 1980 film "", and in the years since the two have been frequent collaborators. Robertson would later work on Scorsese's movies "The King of Comedy", "", "Casino" and "", and act as executive music director for "".

Albums with The Band