The 24th Infantry Regiment was a unit of the United States Army, active from 1869 until 1951, and again from 1995 until 2006. The regiment is notable for having a colorfully checkered history, with a record of mostly meritorious service and valorous combat performance interspersed with episodes of incompetence among the officer corps and conduct unbecoming U.S. soldiers.

The regiment was originally organized in the aftermath of the U.S. Civil War as a segregated unit of African Americans. The regiment was posted to the western frontier, where it got the nickname of Buffalo Soldiers.

Later it was deployed overseas and saw combat in the Spanish-American War and the Philippine Insurrection. From 1916 until 1919, the 24th Infantry patrolled the border with Mexico, defending against cross-border incursions by Mexican rebels. In 1917, the 1st Battalion was placed on temporary duty near Houston, Texas. Provoked by racist maltreatment, soldiers of the 1st Bn, 24th Infantry mutinied and came into conflict with local civilians, in what has been called the Houston or Camp Logan Riot. Both soldiers and civilians were killed in the conflict; numerous soldiers were later court-martialled, and some of those convicted were eventually executed.

The 24th Regiment served honorably in the Pacific Theatre during World War II. Despite the desegregation of the U.S. Armed Forces in 1948, the 24th Infantry remained predominantly African–American, with an officer corps of both African and European Americans. During the Korean War, the regiment was noted for its poor performance in several battles. Although morale and performance gradually improved, especially after an overhaul in leadership, its reputation could not be overcome, and the unit was dissolved in 1951.

The 24th Infantry was re-instituted in 1995 and assigned to the 25th Infantry Division. The regiment performed admirably in the Iraq War from 2004 to 2005, and was decorated for its service. In 2006, during a re-organization of the Army, the regiment was re-flagged; however, the 1st Battalion was not included, and so it alone retains the regimental designation and carries on its legacy. It is now part of the 1st Brigade Combat Team (Stryker), 25th Infantry Division at Fort Wainwright, Alaska.

The 24th Infantry Regiment (one of the Buffalo Soldier regiments) was organized on November 1, 1869 from the 38th and 41st (Colored) Infantry Regiments. All the enlisted soldiers were black, either veterans of the U.S. Colored Troops or freedmen. From its activation to 1898, the 24th Infantry served throughout the Western United States. Its missions included garrisoning frontier posts, battling American Indians, protecting roadways against bandits, and guarding the border between the United States and Mexico.

The year 1898 saw the 24th Infantry deployed to Cuba as part of the U.S. Expeditionary Force in the Spanish-American War. Elements of the 24th participated in the storming of the Spanish fortress in the Battle of El Caney. At the climactic battle of San Juan Hill, supported by intensive fire from the Gatling Gun Detachment, units of the 24th Infantry, accompanied by elements of the 6th and 13th Infantry Regiments, assaulted and seized the Spanish-held blockhouse and trench system atop San Juan Hill. 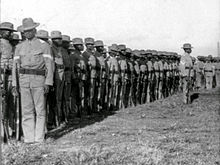 In 1916 the 24th Infantry guarded the U.S.-Mexico border to keep the Mexican Revolution from spilling on to U.S. soil. When it did, the 24th joined the "Punitive Expedition" under General Pershing and entered Mexico to fight Pancho Villa's forces. In 1919, rebels and troops of the Mexican government fought in Ciudad Juárez, Chihuahua, which borders the U.S. city of El Paso, Texas. The 24th Infantry crossed over again to engage the rebels, ensuring that no violence erupted across the U.S. border.

Pre-World War I and the Houston Riot

The Houston Riot (1917) was a mutiny by 150 black soldiers of the Twenty-fourth United States Infantry, called the Camp Logan Riots. Sergeant Vida Henry of I Company, 3rd Battalion led about 150 black soldiers in a two-hour march on Houston because they had suffered racial discrimination in the city.

The soldiers were met by local policemen and a great crowd of Houston residents, who had armed themselves. When the soldiers killed Captain J.W. Mattes of the Illinois National Guard (after mistaking him for a local policeman), the Battalion fell into disarray. Sgt. Henry shot himself, distraught over having killed another serviceman. In their two-hour march on the city, the Battalion killed 15 armed whites, including four policemen, and seriously wounded 12 others, one of whom, a policeman, subsequently died. Four black soldiers were killed. Two were accidentally shot by their own men, one in camp and the other on San Felipe Street. The riot lasted one afternoon, and resulted in the deaths of four soldiers and 15 civilians. The rioters were tried at three courts-martial. Fourteen were executed, and 41 were given life sentences.

At the start of World War II, the 24th IR was stationed at Fort Benning as School Troops for the Infantry School. They participated in the Carolina Maneuvers of October – December 1941. During World War II, the 24th Infantry fought in the South Pacific Theater as a separate regiment. Deploying on April 4, 1942 from the San Francisco Port of Embarkation, the Regiment arrived in the New Hebrides Islands on May 4, 1942. The 24th moved to Guadalcanal on August 28, 1943, and was assigned to the US XVI Corps. 1st Battalion deployed to Bougainville, attached to the 37th Infantry Division, from March to May, 1944 for Perimeter Defense Duty. The Regiment departed Guadalcanal on December 8, 1944, and landed on Saipan and Tinian on December 19, 1944 for Garrison Duty that included mopping up the remaining Japanese forces that had yet to surrender. The Regiment was assigned to the Pacific Ocean Area Command on March 15, 1945, and then to the Central Pacific Base Command on May 15, 1945, and to the Western pacific Base Command on June 22, 1945.

The Regiment departed Saipan and Tinian on July 9, 1945, and arrived on the Kerama Islands off Okinawa on July 29, 1945. At the end of the war, the 24th took the surrender of forces on the island of Aka-shima, the first formal surrender of a Japanese Imperial Army Garrison. The Regiment remained on Okinawa through 1946.

From the end of World War II through 1947, the 24th occupied Okinawa, Japan, after which it relocated to Gifu, Japan. On February 1, 1947, the regiment reorganized as a permanent regiment of the 25th Infantry Division. In late June 1950, soon after North Korea invaded South Korea, the 24th deployed to Korea to assist in the Korean War.

The 24th Infantry fought throughout the entire Korean peninsula, from the defense of the "Pusan Perimeter" to its breakout and the pursuit of communist forces well into North Korea, to the Chinese counteroffensives, and finally to U.N. counteroffensives that stabilized near the current Demilitarized Zone. The Regiment received the Republic of Korea Presidential Unit Citation for its defense of the Pusan Perimeter. The regiment also had two posthumous Medal of Honor recipients, Cornelius H. Charlton and William Thompson.

The cases of Lieutenant Leon Gilbert, court martialed for refusing an order from the 24th's commanding officer (who was white), and of some other members of the 24th, helped bring greater attention to problems of segregation and discrimination within the U.S. military.

The landing at Inchon by U.S. and ROK forces on September 15 finally compelled the North Koreans to withdraw from the Pusan Perimeter. The 24th Infantry was divided into Task Forces Blair and Corley (named for their commanders), and they, along with several from other commands, began pursuing the enemy on September 27.

The 25th Division remained in South Korea until ordered north in late November to participate in the Chongchon operation. Later in November, overwhelming assaults by Chinese troops forced the U.S. Eighth Army to withdraw. On November 29, the Chinese 40th Army flanked the 24th Infantry's line north of the Chongchon River in North Korea, forcing the neighboring 9th Regiment of the 2nd Division to withdraw.

On November 30, the 3/24th was at Kunu-ri, on the division's open right flank, with Chinese troops behind it. With the help of air support, the battalion extricated itself, losing one soldier killed, 30 wounded and 109 missing. Overall, the 24th Infantry lost one-fifth of its officers and one-third of its enlisted men in the withdrawal across the Chongchon. Colonel Corley blamed the disarray of the 3rd Battalion on its commander, Lt. Col. Melvin E. Blair, whom he summarily relieved.

The Eighth Army's withdrawal did not cease until the force was well below the 39th parallel north. But by early March 1951, the American and ROK troops were again ready for a full-scale offensive.

On March 6, the 25th Division advanced across the Han River. The 1/24th did well, moving over difficult terrain against an entrenched enemy. The 3rd Battalion initially also performed well, executing a hastily devised river crossing and advancing through rough country against well dug-in Chinese troops, far from the 1st Battalion. While climbing up steep terrain, however, the 1/24th reportedly collapsed under Chinese fire and withdrew in disorder. When the division commander learned of that action, his confidence in the 24th plummeted. Many soldiers of the 24th ran away from the fight, tossing their weapons and equipment aside. A derisive poem throughout the U.S. Army stated: When them Chinese mortars begins to thud, the Old Deuce-Four begin to bug.

In August, the regiment's new commander, Colonel Thomas D. Gillis, prodded by the division commander, closely examined the 24th's record in Korea. Determining that leadership had been the problem, he relieved a number of officers. After the change in command, Company F conducted a valiant bayonet and grenade charge on September 15. But, the positive performance of Company F was ignored by higher commands and the news media. By October 1, 1951, the 24th had passed into history.

Executive Order 9981 desegregated the United States military in 1948. On October 1, 1951, the Deuce-Four was inactivated, and the soldiers were dispersed to other units. These soldiers continued to serve proudly on active duty through the 1980s. It was not until August 24, 1995 that the 24th was reactivated.

The Deuce Four Skull was put on buildings in Iraq where enemies were killed.

They were assigned to the 1st Brigade, 25th Infantry Division 'Lightning' (a Stryker brigade), and served in Iraq from October 2004 to October 2005. The Battalion came home with 5 Silver Stars, 31 Bronze Stars, and 181 Purple Hearts and played a crucial role in the Battle of Mosul (2004). During that battle, the Battalion saw some of the heaviest, sustained fighting of the insurgency to date. The unit was also awarded with the Valorous Unit Award as being part of the 1st Brigade, 25th Infantry Division (SBCT).