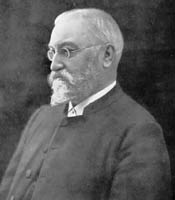 In the great Anglican debate of the , he was a Low Churchman rather than High Church sacerdotalist.

In 1881, he received a Doctor of Divinity degree from , who cited Bullinger's "eminent service in the Church in the department of Biblical criticism." [" E. W. Bullinger: A Biography", Carey, Juanita, 2000, pp.62]

Bullinger's friends included well-known Dr. Theodore Herzl. This was a personal friendship, but accorded with Bullinger's belief in a Biblical distinction between the Church and the Jewish People.

In 1867, at age 29, Bullinger accepted the office of clerical secretary of the (TBS), an office which he exercised, with rare lapses due to illness in his later years, until his death. Accomplishments of TBS during his secretariat include:
* Completion and publication of a Hebrew version of the New Testament under a TBS contract with after the demise of Isaac Salkinson.
* Publication of Ginsburg's first edition of the ("Introduction to the Massoretico-Critical Edition of the Hebrew Bible").
* Formation of the Evangelical Mission Society under [http://www.gospelmagazine.org.uk/february1957.pdf Pasteur LeCoat] and translation of the Bible into the .
* First-ever Protestant Portuguese Reference Bible.
* Distribution of Bibles in Spain after the Spanish Revolution of 1868.

Bullinger was also a practiced musician. As part of his support for the Breton Mission, he collected and harmonized several previously untranscribed Breton hymns on his visits to Tremel, Brittany.

Bullinger's TBS workload in his later years was reduced by the assistance of and . Their assistance enabled him to focus on "The Companion Bible" in his final years. Bullinger and Ginsburg parted ways, and another edition of Tanakh was published by the .

Bullinger's theology was a form of on which he wrote numerous articles which appeared in his monthly journal "Things to Come". Bullinger described dispensations as divine "administrations" or "arrangements" wherein God deals at distinct time periods and with distinct groups of people "on distinct principles, and the doctrine relating to each must be kept distinct." He emphasizes that "Nothing but confusion can arise from reading into one dispensation that which relates to another." {Companion Bible, [cite book | title=Companion Bible | last=Bullinger | first=E. W. | authorlink= | publisher= | location= | edition= | date=1922 | id= | pages=Appendix 181] }

He listed seven "dispensations" in the Bible:

:1. The Edenic State (Innocence) - which lasted until the expulsion from Eden.

:2. Mankind as a whole (Patriarchal) - from the expulsion from Eden until the giving of the Law to Israel, although in one place Bullinger says that this dispensation ended with the Flood and the confusion of Babel.

:3. Israel (under the Law) - ended with the rejection by Israel of the grace of God at the end of Acts.

:4. The Church of God (The Secret Dispensation of Grace) - gradual transition from Law to Grace during the Acts period, culminating in the rejection of Israel in Acts 28:24-28. {Companion Bible, Appendix 193}

:5. Israel (Judicial) - begins at the "Gathering Together".

:6. Mankind as a whole (Millennial or Theocratic) - ends with the destruction of Satan.

His name has become virtually synonymous with Ultradispensationalism. Although Bullinger was influenced by [Carey, Juanita "E. W. Bullinger", pp.104-105: In "Number in Scripture", Bullinger indirectly alluded to the work of a man who had died a few years before Bullinger was born but whose work...was to influence him significantly. As he explained: ...'Some sixty years ago the [the true teaching concerning... the Mystery concerning the Body of Christ] ...was recovered, but was speedily perverted.' In these cryptic remarks, Bullinger alluded to the work of Edward Irving, who had burst on the ecclesiastical scene about sixty years before... ] and although Bullinger shared with Irving's contemporaries, the such as , similar dispensational doctrines, members of the Brethren became some of his most persistent critics.

Bullinger also taught a form of .