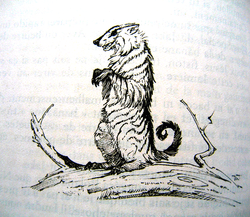 Oy sitting on a log. Art by Michael Whelan.

Oy of Mid-World is a primary character in Stephen King's The Dark Tower. He was introduced in the third book, The Dark Tower III: The Waste Lands, and became a member of the ka-tet for the rest of the series.

Oy is a "billy-bumbler," a strange creature found in Roland Deschain's world (also known as a "throcken", as identified by Mordred Deschain in The Dark Tower VII: The Dark Tower). King describes Oy in the "Argument", or foreword, of the fourth book, Wizard and Glass - "Bumblers, which look like a combination of a Furby and a McDonald's Fry Kid have a limited speaking ability"[1]. Elsewhere, bumblers are described as "a combination raccoon and woodchuck, with a little dachsund thrown in."[2] At one point, Eddie calls Oy "a fucked-up weasel"[3]. Oy's voice is described as "low and deep, almost a bark; the voice of an English footballer with a bad cold in his throat."[2]

King seems to base Oy's appearance on the Tanuki, also known as the raccoon dog, or the Coati. Regarding Oy's appearance, by far the most frequently described feature throughout the series is his large, "bright"[4] almost glowing, "intelligent,gold-ringed eyes"[5], though King also frequently refers to the creature's "disproportionately long,[6]" "surprisingly graceful neck"[7]. The creature has "black- and grey-striped fur[8]" and a "furry corkscrew tail"[7].

Some billy-bumblers - Oy more than any other - are very smart and may even have the capacities of humans. Before the final three volumes were published, there was some room for dispute as to whether Oy has human-like sentience or merely repeats important phrases from other characters. Arguments minimizing his intellect seem to be disproven in the final books, including one episode in which Jake Chambers temporarily switches minds with him. In those final books, Oy clearly understands virtually everything happening around him as clearly as a person would. When a car he is traveling in stops short, throwing him from Jake's lap to the dashboard, Oy clearly yelps the human expletive "fuck."[9]" When Jake bumps the bumbler on the head accidentally, Oy cries "Ouch, Ake!"; Jake tells him to be quiet, and the bumbler winks and whispers, "Kiyit.[10]"

While Oy is certainly friendly with all the members of his ka-tet (Roland even believes Oy is more fully a member of the ka-tet than himself[11]), his loyalty is first and foremost to "Ake!", as the bumbler calls Jake. The boy and his bumbler love each other madly almost at once; it could even be said that Oy loves the others only because Jake loves them. Oy tolerates physical contact with the others, always with some trepidation, although he does seem to trust them. He almost never initiates physical contact with the others during normal circumstances (i.e., when Jake is also present); Jake is the only one Oy consistently and endlessly seeks out for attention, affection, and contact. When the ka-tet travel, Oy is always either at Jake's heel, in the boy's arms, or a few steps ahead of him. "Ake" is quite simply the center of Oy's universe, his reason to exist, and a figure of infinite interest and wonder. 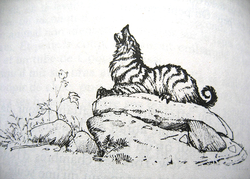 Oy sitting on a rock. Art by Michael Whelan.

In The Waste Lands, Roland and his ka-tet are camping in the woods when one morning, Jake wakes up with the animal licking his face. The bumbler is wounded, with bites and cuts from what appears to have been a fight with another billy-bumbler; Roland speculates he may have been violently banished from his pack for his intelligence and chattiness.

When Jake Chambers inquires as to what the animal is, Roland tells them about billy-bumblers in his home city of Gilead; common in the wild, they were also frequently kept as pets. Roland is surprised at Oy's speech, and reveals that fewer and fewer bumblers spoke as the world moved on, and he hasn't seen one do so in many years. Oy seems very shy at first, but when Jake feeds him, he immediately falls in love with the young boy and begins to follow him around. Roland lets Jake keep Oy as a pet, as having a billy-bumbler supposedly brings good luck to a party, and the sudden affection of a passing bumbler who still speaks seems more than a simple coincidence[12]. Initially, Jake simply called him "boy", which the bumbler parroted as "Oy", and the name stuck.

As the ka-tet approaches the city of Lud, in The Waste Lands, they cross a dilapidated bridge, and at one point must tiptoe across a long length of 3" wide pipe. Oy slips, Jake dives to grab him, and the bumbler latches on to Jake's hand with his teeth to avoid falling hundreds of feet, but seems remorseful afterward. Immediately afterward, an evil gangster named Gasher captures Jake. Roland and Oy set off to find him. Oy is able to track Jake by his scent, and he also helps Roland avoid some of the traps along Gasher's trail.

When Roland and Oy catch up to Jake in the presence of the Tick-Tock Man (Andrew Quick, great-grandson of David Quick), Oy delivers a message by crawling through the vents into Jake's sight. Roland asks the bumbler how many men are in the room, and the bumbler taps his feet six times, looks at Roland, then simultaneously taps his foot once more and says "Ake!", correctly describing six bad guys plus Jake himself[13].

Oy returns to the vent to create a distraction, and when Tick-Tock strikes Jake, Oy bursts through the vent, leaps onto Tick-Tock's face, and claws out the man's left eye[14]. In the process, the bumbler is stabbed in the flank by one of Tick-Tock's henchmen, but the wound is minor. Oy proves his worth in this instance and becomes an integral part of the ka-tet and Jake's tireless companion.

Early in Wizard and Glass, the ka-tet are passing through the post-apocalyptic Topeka Zoo, and come across a dead wolf. Oy sniffs the wolf carefully, cranes his neck, and begins to howl[3].

At the Green Palace, early in Wizard and Glass, the ka-tet find themselves in the roles of Dorothy and her companions meeting the Wizard of Oz. Outside the gates, they discover a set of "shoes" has been left for each of them, including four small booties for Oy. When the four humans simultaneously click their own heels, the gate shakes but does not open. Jake realizes Oy wasn't in his booties yet, and when Oy steps into them and lies on his back, Jake and Roland tap the bumblers feet together and the gate immediately opens[3]. This would seem to suggest Oy is in fact a full member of a five-way ka-tet.

Inside the Palace, Oy serves perfectly in Toto's place, exposing "the great Oz" by pulling back a curtain, revealing the man behind it - Andrew Quick, the Tick-Tock Man. Oy immediately attacks his old nemesis and bites his thigh just before Eddie and Susannah shoot him, killing the man once and for all[15].

Oy further cements his place in Roland's ka-tet by announcing himself to the residents of Calla Bryn Sturgis at the dinner welcoming the gunslingers to the community in Wolves of the Calla. At Roland's behest, Jake sets Oy down on the stage where he shakily mimics the other's bows and announces himself as a member of the group.

Oy accompanies Jake and Roland to Maine in The Dark Tower VII: The Dark Tower. He stays by Jake's side after he is mortally wounded, and lingers at the grave Roland digs in the forest. Roland thinks there is a chance that Oy may just decide to stay at Jake's grave and wait to die by whatever means takes him first, but he is slightly heartened when Oy decides to accompany him a little further on the journey.

Oy is saddened by the death of Jake and rarely speaks as he continues with Roland and Susannah on the Dark Tower quest. Still, when given the chance to go with Susannah through The Artist door to a New York where Eddie and Jake are waiting, Oy makes a choice - simply saying "Olan" (his word for 'Roland') - and stays by the gunslinger.

As Mordred Deschain sneaks toward Roland and Patrick Danville in their sleep at the end of The Dark Tower VII: The Dark Tower, Oy attacks him. Roland wakes up instantly but is delayed by the fact that Susannah had taken his left hand gun (his right hand being useless for shooting due to the loss of two fingers). Despite having a chance to escape, Oy presses the attack on Mordred. Oy's spine is snapped and he is tossed far, to be impaled on a tree limb which Roland himself had left sharpened when gathering firewood. Roland kills Mordred and goes to the dying Oy. The bumbler whispers "Olan", and licks his hand once before dying.

Beyond falling asleep on guard before Mordred's attack, Patrick Danville may be indirectly responsible for Oy's fate in another way. Not long before the departure of Susannah, Patrick (whose drawings become reality, though he may not have realized it at the time) casually scratched out a picture of Oy when he wanted to reuse a piece of paper, inadvertently "marking" Oy for death.

In the third issue of the comic miniseries The Long Road Home, Roland, trapped in Maerlyn's Grapefruit, sees a billy bumbler impaled on a tree limb. Like the vision in the original Wizard and Glass, the bumbler says "Olan" but this is said after Roland himself says his own name. The same happens when Roland says "No hope...no joy" and the bumbler mimics back the word "Oy". As such it is slightly ambiguous as to whether it is Oy or not, though that is the implication.

In the closing afterword of The Dark Tower, King reassures the readers that a version of Oy will soon join up with Susannah, Eddie, and Jake. She had left in a door drawn by Patrick Danville and had already met Eddie and Jake Torren in an alternate New York. King states that this Oy might be more canine in form, with barks that sometimes oddly sound like speech.