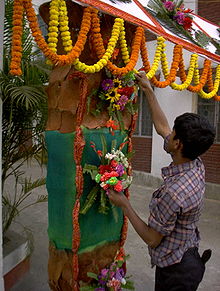 Flower garland for a wedding 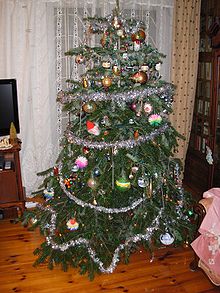 A garland is a decorative wreath or cord, used at festive occasions, which can be hung round a person's neck, or on inanimate objects like Christmas trees. Originally garlands were made of flowers or leaves.

From the French "guirlande", itself from the Italian "ghirlanda", a braid.

Its a long tradition in India where flower garlands have an important role in every festival, when the deities are decorated with garlands made from different fragrant flowers (often Marigold) and leaves. Also fruit, vegetables and currency notes are worn as thanksgiving. Also in wedding the couple wears a wedding garland. In other occasions it is used to show respect to an individual person or statue (murti).

A Gajra is a flower garland which women in India and Bangladesh wear during traditional festivals. It is made usually of jasmine. It can be worn both on the bun and with the braid coiling. Women usually wear these when they wear sarees.

A garland created from the daisy flower, generally as a children's game, is called a daisy chain. One method of creating a daisy chain is as follows: daisies are picked and a hole is made towards the base of the stem, generally by piercing with fingernails or tying a knot. The stem of the next flower can be threaded through until stopped by the head of the flower. By repeating this with many daisies, it is possible to build up long chains and to form them into simple bracelets and necklaces.[1]

There is another popular method which involves pressing the flower heads against each other, so that the final chain looks like a caterpillar.

The term "daisy chain", or "daisy chaining", can also refer to various technical and social "chains".

Garlands are also used in older forms of poetry like 'Old Meg she was a gypsy' and other older poetry.

A garland is also used in La Belle Dame sans Merci by John Keats, a poem often analysed for its portrayal of women pre-1914.

In the Bible (English Standard Version), Proverbs 4:9 describes Wisdom as: "She will place on your head a graceful garland; she will bestow on you a beautiful crown."

In the 1906 children's book The Railway Children by Edith Nesbit garland is used as a metaphor as well: "Let the garland of friendship be ever green." (Chapter IX).