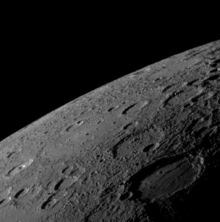 Image of Mercury as seen by MESSENGER spacecraft in 2008

The planet Mercury has often been used as a setting in science fiction. Recurring themes include the dangers of being exposed to solar radiation and the possibility of escaping excessive radiation by staying within the planet's slow-moving terminator (the boundary between day and night). Another recurring theme is autocratic governments, perhaps because of an association of Mercury with hot-temperedness.

Mercury was believed at first to be tidally locked to the Sun, orbiting with one face permanently turned toward it and another face turned away, allowing for extremes of heat and cold on the same planet and possibly a narrow belt of habitable land between the two. This concept of Mercury was disproven in 1965, when radio astronomers discovered that Mercury rotates three times for every two revolutions, exposing all of its surface to the Sun.

Fictional works about Mercury can thus be divided into two groups; those, mostly written before 1965, featuring the "Old" Mercury with its light and dark sides, and those that reflect more recent scientific knowledge of the planet.

Later, as the Earth's span closed, the transferred minds (of the Great Race of Yith) would again migrate through time and space — to another stopping place in the bodies of the bulbous vegetable entities of Mercury.

The planet has also been a setting for several television series: