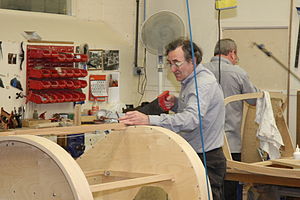 Woodworking being done in a workshop 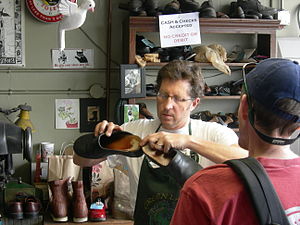 Shoes are repaired by a skilled shoemaker, here he evaluates a pair of shoes with a customer watching

A craft is a branch of a profession that requires some particular kind of skilled work. In historical sense, particularly as pertinent to the Medieval history and earlier, the term is usually applied towards people occupied in small-scale production of goods.

Development from the past until today

Historically, craftsmen tended to concentrate in urban centers and formed the guilds. Trade occupation and the need to be permanently involved in the exchange of goods also demanded a generally higher level of education and in societal hierarchy the craftsmen were usually in a more privileged position than the peasantry.

The households of the members of the society occupied in trade professions were not as self-sufficient as of those engaged in agricultural work and, as such, had to rely on exchange of goods.

This system of a stepwise approach to mastery of a craft which invokes the obtainment of a certain amount of education and the learning of skills, has survived in some countries of the world until today, although craft has undergone deep structural changes during the era of the Industrial Revolution in which mass production of goods of the industry has limited craft to areas of life which large scale industry could not satisfy - due to its modes of functioning - or in which mass-produced goods would not meet the preferences of potential buyers. Moreover, as an outcome of these changes, craftspeople increasingly make use of semi-finished components or materials today, and accomplish and adapt such a kind of ware to their customers' requirements or demands and, if necessary, to the environments of their customers, taking it in hand, in case fitting-work is needed, and thus augment what the industry already had produced - through participating in a certain division of labour between industry and craft.

For getting an overview of the work branches, see: 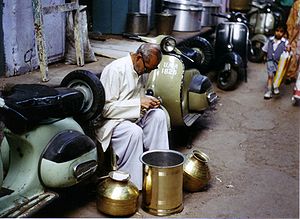 Street handicraft: here a skilled metalsmith in Agra, India sits between scooters in a commercial area making careful observations in the practice of his trade
Main article: Handicraft
Main article: Outline of crafts

The Arts and Crafts Movement 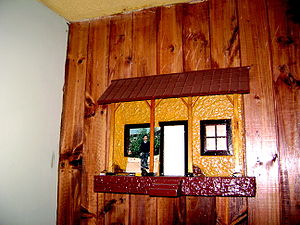 A product of handicraft: a relief of a simple house façade made as a decorative item
Main article: Arts and Crafts Movement

The term crafts is often used to describe the family of artistic practices within the family decorative arts that traditionally are defined by their relationship to functional or utilitarian products (such as sculptural forms in the vessel tradition) or by their use of such natural media as wood, clay, glass, textiles, and metal.

Crafts practiced by independent artists working alone or in small groups are often referred to as studio craft.

A craft fair is an organized event to display crafts by a number of exhibitors. There are craft shops where such goods are sold and craft communities, such as Craftster, where expertise is shared.

Craft as a classification

Both Freemasonry and Wicca are known as 'The Craft' by their adherents.