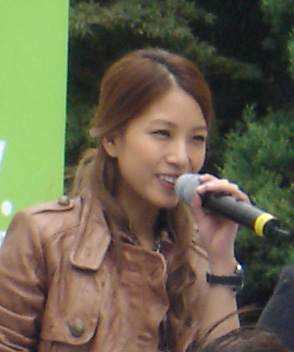 Boa Kwon (born , ), commonly known by her stage name BoA, is a Korean singer, active in both and . Born and raised in , , BoA was discovered by talent agents when she accompanied her older brother to a talent search. In 2000, after two years of training, she released "", her debut Korean album, under SM Entertainment. Two years later, she released her debut Japanese album, "", under the label.

BoA's multilingual skills (she speaks Japanese and conversational English along with her native Korean and has recorded songs in Mandarin Chinese) [cite video| people=Wholey, Dennis (Interviewer) | title=Interview with BoA | medium=TV-series | publisher= | location= | year2=2006] [cite web | url=http://209.85.173.104/search?q=cache:Cr6x_DWzqtkJ:wlcmedia.csumb.edu/Japanese/TAbbott-E-Reserves/J-Pop_Culture/J-PopC%2520PDF%2520Files/The%2520Singers%25202.pdf+Dennis+Wholey+BoA&hl=en&ct=clnk&cd=8&gl=us&client=firefox-a | title=Hideki Saijo | publisher=] have contributed to her commercial success in South Korea and Japan and her popularity throughout Asia. She is one of only two non-Japanese Asians who have had million-selling albums in Japan and is one of only two artists to have six consecutive number-one albums on the Oricon charts. [ja icon cite web | url=http://www.oricon.co.jp/news/rankmusic/41448/ | title=BoA、オリジナル1stから5作連続首位！ | date=, | accessdate=2008-09-30 | publisher=]

At the age of thirteen, after two years of training, BoA released her debut album "" in South Korea on , . The album was successful, entering the Top 10 of the South Korean charts. Meanwhile, her Korean record label, , made arrangements with Japanese label to launch her music career in Japan.

In early 2001, BoA released her first mini-album "". After its release, she took a hiatus from the Korean music industry to focus on the Japanese market. During this time she struggled to solidify her skills in Japanese.

BoA reinvented her image on her fourth Korean album, "My Name" (2004); she left the "cute" and "youthful" style that had characterized previous years and presented herself as "sexy" and "sultry". Her fifth Korean album, "", continued her image change. The album portrayed the singer as more "mature and self-confident"; the "bohemian" look of the cover photograph represented "freedom and depth", while music videos and album photographs that portrayed BoA in traditional Korean dress brought the "idea of Korean womanhood" into her music. [cite web | url=http://english.chosun.com/w21data/html/news/200506/200506150011.html| title=BoA Reinvents Herself as Heir to Korean Tradition | accessdate=2008-09-15 | publisher=Digital Chosun Ilbo] [cite web | url=http://english.chosun.com/w21data/html/news/200506/200506210011.html| title=New Album Shows Off More Mature BoA | accessdate=2008-09-15 | publisher=Digital Chosun Ilbo]

In 2006, BoA was mostly inactive in South Korea as she focused her attention on Japan; however, on , , she released her first digital single in Korea, a Korean version of "Key of Heart". Her fourth Japanese studio album "" was released on , . The limited CD+DVD edition of the album contained music videos of the album's singles and a secret password to unlock a special version of the official website. The album reached the number-one spot on the Oricon chart for its first week of release, making it her fourth consecutive Japanese album to do so. It had low debut sales, however; with 220,000 copies sold, it became her lowest-selling first-week debut for a studio album at that point. "," the first single from the album, reached the top spot on the Oricon, making her the fifth non-Japanese singer to have #1 single, the first in over twenty-one years. "", the last single from the album, was the singer's first digital single. In support of "Outgrow", BoA launched a special tour, "B0A The Live", on , . The tour, which lasted until October 29, started from and contained twelve shows, two in each of the following cities: Nagoya, Fukuoka, , , , and . [ja icon cite web |url=http://web.archive.org/web/20060903013221/http://www.avexnet.or.jp/boa/news.html | title=News at BoA's Official Website | date=August 22, 2008|accessdate=2008-09-15|publisher= (Archived version)] She staged her first Christmas concert on . [cite web | url=http://english.chosun.com/w21data/html/news/200611/200611080003.html | title=BoA's New Single Shoots to Top of Japanese Charts|accessdate=2008-09-15|publisher=Digital Chosunilbo]

BoA's fifth Japanese studio album, "" (2007), continued her transition from a "teenage girl" image to a more mature image. The album, which contained R&B and dance songs as well as ballads, debuted at the top of the weekly Oricon charts, making the album her sixth in a row to do so. [cite web | url=http://english.chosun.com/w21data/html/news/200701/200701270002.html | title=It's Lonely at the Top: BoA Turns 20|date=, |publisher=Digital Chosunilbo|accessdate=2008-09-16] On , , she launched a nationwide tour of Japan in support of the album. The tour, which sold about 70,000 tickets, was, according to BoA, "the biggest concert" she had ever given. [cite web | url=http://english.chosun.com/w21data/html/news/200704/200704020011.html | title=BoA's Teenage Discipline Pays Off at 20 | publisher=Digital Chosunilbo|accessdate=2008-09-16] Two tracks from the singles of "Made in Twenty (20)" were used as theme songs; "Your Color", from the single "Nanairo no Ashita~brand new beat~ / Your Color" (2006), was used as the ending theme song for the Japanese release of the game "". "Key of Heart", from the single "", was the ending theme of "Over the Hedge" in Japan. She also released an English version of "Key of Heart," which was only available on the first press edition of the single. The album's last single, "" (2006) became another number-one single for the artist.

Later in 2007, (a brand) signed BoA, Xiah Junsu (of ), Tablo (of ), and jazz pianist Jin Bora onto "AnyBand", a band created specifically to promote Anycall. The band released only one single, "AnyBand".

With her sixth Japanese album, "The Face" (2008), BoA took more creative control over her music. She began writing her own lyrics and co-composed one of the songs ("Girl in the Mirror").

BoA lists as her main musical influence, though she also enjoys . Her favorite musicians are , , , , , and ;

BoA has collaborated with "high-profile" artists. Among the Japanese artists she has performed with are the group (for the single "The Love Bug"), Kumi Koda, and house DJ . She has performed with Western artists: the song "Flying Without Wings" from her album "Next World" was a collaboration with Irish band covering the original song; the single "Show Me What You Got" was performed with of the American band . Other artists she has collaborated with are the , Dabo, Verbal (of m-flo), RAH-D, and Yutaka Furakawa (of the band Doping Panda). American rock band covered "" on the album "". [ja icon cite web | url=http://www.barks.jp/news/?id=1000040556 | title=Weezer Covers BoA's "Meri Kuri" in Japanese | date=, | accessdate=2008-08-13 | publisher=Barks (Japan)]