Millett Hall is a basketball arena in Oxford, Ohio. It is home to the Miami University men’s and women’s basketball, and women’s volleyball teams. It is also the home of the ROTC program and various university events. It is named after Miami University’s 16th President John D. Millett. The original construction cost was approximately $7.5 million. It is located on the northern part of Miami’s campus, near Yager Stadium. The arena opened its doors on December 2, 1968, against Adolph Rupp's Kentucky Wildcats. A crowd of 9,135 saw the Wildcats win 86-77. Miami’s first win came on December 4, 1968, a 86-67 win over Bellarmine.[1] 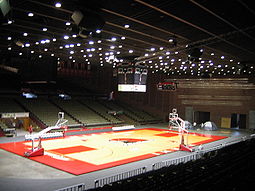 The majority of the seating is located on the sides of the court. These are divided up into an upper and lower bowl. The seats in the lower bowl are a green fabric material, while the upper bowl are a brown color. A large scoreboard hangs from the center of the arena with statistics. Two smaller scoreboards hang above each basket. A video screen is projected onto one of the black curtains at the south end of the court.

One of the main complaints with the arena is that the fans are too far away from the action. The arena was built for multi-purpose use and not for athletics. Unlike many of the other arenas in the Mid-American Conference, fans are not on top of the court at Millett. Miami head coach Charlie Coles reflected on this in an interview with the Columbus Dispatch in 2007. "When you play at Millett the fans are so far away, and that has affected our student crowd." He added, "They don't feel like they can be an influence, and young people today like to be an influence. You can’t get that momentum. We have to get a large crowd to have an impact of the home arena."[4]

The Miami men's basketball team has enjoyed a great amount of success in Millett Hall. They have compiled an all time record of 390-130 or a 76.5 winning percentage (including the 2008-09 season). Banners hang from the catwalks recognizing Miami's NCAA and NIT tournament appearances. Banners also hang recognizing Miami's 21 Mid-American Conference regular season championships, the first in 1952 and most recently in 2005. There are five retired jerseys at Millett Hall. They include: Ron Harper (34), Wayne Embry (23), Dick Walls (44), Darrell Hedric (86), and Wally Szczerbiak (32). Harper's jersey was the first to be retired, during halftime of his final home game in 1986.[5]

In 34 years at Millett the women's team has compiled a winning percentage of 68.3. During the 1981-82 season Miami went a perfect 10-0 at home. They set a record for home wins in a season with 12 during the 1996-97 season. The RedHawks have only suffered six losing seasons at Millett Hall.[8] Mary Ann Myers (20) and Heather Cusick (5) are the two women's jerseys retired at Millett.[9] 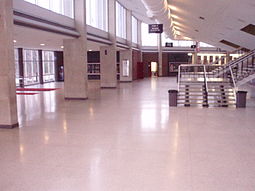 The 2009 volleyball campaign will mark the 25th season in Millett Hall for women's volleyball. Prior to the 1985 season the volleyball team played at Withrow Court since they began play in 1974.[11] The RedHawks enjoy a lot of success with a winning percentage of 66.6 at home. The longest home winning streak is 17, starting on September 12, 1998, and ending on September 4, 1999. The 1998 team went a perfect 12-0 against Mid-American Conference opponents. The largest crowd to watch volleyball at Millett came during the 1995 Volleyball Championship when over 1,000 fans attended.[1] 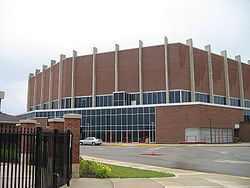 Millett Hall has hosted many other events and speakers.

It was also the site of Miami University’s Bicentennial Ball held on February 21, 2009, as the university celebrated the 200th Anniversary of its charter signed February 17, 1809.[12]