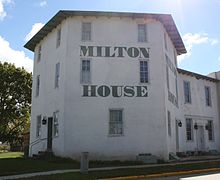 Originally named Prairie du Lac, Milton was settled in 1838 by Joseph Goodrich, who built an inn, the Milton House, at the intersection of two trade routes. The Milton House is today one of the oldest poured grout structures in the United States.[5] A noted abolitionist, Goodrich is known to have aided fugitive slaves escape to freedom via the underground railroad.

It is believed that Milton is named after poet John Milton, author of "Paradise Lost", after a settler remarked that the town was his "Paradise Regained" after leaving his previous home, which he thought of as a paradise lost.[6]

According to the United States Census Bureau, the city has a total area of 3.2 square miles (8.4 km²), all land.

There were 2,034 households out of which 36.6% had children under the age of 18 living with them, 52.9% were married couples living together, 11.2% had a female householder with no husband present, and 32.0% were non-families. 26.5% of all households were made up of individuals and 10.8% had someone living alone who was 65 years of age or older. The average household size was 2.51 and the average family size was 3.04.

Milton is the site of a $70 million ethanol plant built by United Cooperative.[8] A Cargill animal nutrition plant is located in Milton, with a 170-foot (52 m) grain elevator.[9]

The former Milton College operated from 1844 to 1982. Milton native, Albert Whitford, a graduate of the college, became a leading astronomer.

The city is increasingly tied to Janesville, its larger neighbor to the south, and parts of Janesville are now within the Milton School District as that city expands to the north and east. Students that go to Milton may live in several other districts surrounding Milton such as Janesville and Harmony district.