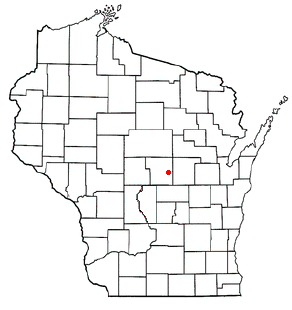 There were 395 households out of which 36.7% had children under the age of 18 living with them, 50.1% were married couples living together, 8.9% have a woman whose husband does not live with her, and 36.5% were non-families. 32.4% of all households were made up of individuals and 17.5% had someone living alone who was 65 years of age or older. The average household size was 2.44 and the average family size was 3.14.

Amherst has a high school and grade school, a public library, and the Lettie Jensen Community Center. Fire protection and ambulance service is provided by the Amherst Fire District. Police protection is provided by the Portage County Sheriff's Dept. There is a riverside park downtown, along the grand Tomorrow River.

Amherst hosts four churches, four taverns, three cemeteries, a microbrewery, several restaurants, a bed & breakfast, a motel, and a small supermarket. There are various other businesses in town, including craft stores, antiques dealers, a couple of gas stations, a bakery, a coffee house, several small warehouses and factories in a new industrial park, and two banks.

Amherst hosts the Portage County Fair, an annual renewable energy fair, an Amish craft fair, the Feel Good Festival (follow the green cows), and other events at the fairgrounds.