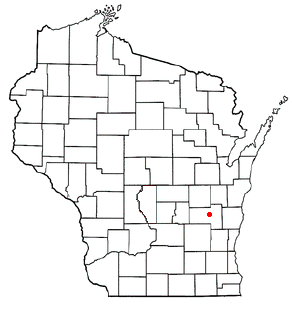 Fond du Lac is a city in Fond du Lac County, , . The name is French for "Bottom of the Lake" (other translations have included "Foot of the Lake" [cite web |url=http://www.uwgb.edu/wisfrench/study/research/fondlac.htm |title=Fond du Lac: Links to our Past |accessdate=2007-03-20 |author=Clorissa Swingen |date=Spring 1988] or "Farthest End of the Lake" [ [http://www.rootsweb.com/~wifonddu/index.htm Fond du Lac genealogy] ] ), for it is located at the bottom (south end) of . The population was 42,203 at the 2000 census. The city is contiguous to the Town of Fond du Lac, although a small portion borders other adjacent towns.

Together with surrounding communities, the Fond du Lac was, according to the 2000 census, home to 57,479 people. The city forms the core of the 's Fond du Lac Metropolitan Statistical Area, which includes all of Fond du Lac County (2000 population: 97,296), and which, when combined with the 'Beaver Dam (city), WI ', form the larger 'Fond du Lac-Beaver Dam, WI '. It was named the safest metropolitan area in the United States in the 2006 edition of City Crime Rankings by Morgan Quitno Press. [ [http://www.fdlpolice.com/safe.htm "Fond du Lac Named Nation's Safest Metropolitan Area in 2006", Retrieved .] ]

On Monday March 19th, 2007, workers reported smoke and St. Louis church was discovered to be on fire. By the end of the night, the south spire and the entire roof of the sanctuary had collapsed. [ [http://www.trackfourdesign.com/church_fire.asp Track Four Design: St. Louis Church Fire, Fond du Lac, WI ] ] The church building has now been demolished and is the home of Attitude Sports.

Since then, the Catholic community has created a focal point called the Holy Family Catholic Church. Two churches, St. Patrick's and St. Louis have been closed and a new worship center has been built. Sacred Heart Church remains open. The future of St. Patrick's remains uncertain.

The mother house of the is located in Fond du Lac. They operate and St Agnes Hospital in the city.

Fond du Lac is the of the . St. Paul's Cathedral is the mother church of the Diocese.

*, a division of
*, maker of aluminum and stainless steel tanker trailers
*, which has a regional call center and operations base for the northeastern part of their Wisconsin service area near the city
*, a manufacturer
*, a division of the , and the largest maker of in the world
*The division of , operating as has a national Call Center and office in Fond du Lac
*, a company which manufactures automotive engine management components and has been located in for over 100 years

Fond du Lac is also host to , an annual summer festival, which is centered around the . Walleye Weekend, usually hosted on the second weekend in June is a "Free Family Fun Festival" held in Lakeside Park on the south shore of Lake Winnebago.

The character Vern Roscoe in Upton Sinclair's novel Oil (the inspiration for the 2007 film There Will Be Blood) is loosely based on Edward L.Doheny,a Irish American oil tycoon and former Fond du Lac resident.

Lakeside Park contains over convert|400|acre|km2 of open recreational space on the south end of . Year-round activities include a whitetail deer exhibit. Summer activities include flower displays, boating, picnics, and weddings within the park's picturesque landscape. From April 15 to October 15, the Lakeside Park Light House and its observation tower are open (weather permitting). Visitors can take rides on a miniature train and an antique carousel. Lakeside Park hosts a holiday event filled with Christmas lights, decorations and music.

Buttermilk Park is a large, grassy, hilly park. It contains an amphitheater and a sledding hill.

Lottery winnings and the "Miracle Mile"

In the 1990s, several grocery and convenience stores on a stretch of South Main Street in Fond du Lac sold large winning tickets, resulting in that part of Main Street being dubbed "The Miracle Mile."

On , , Ma and Pa's Grocery Express, which is in the heart of the Miracle Mile, sold the only winning ticket for $209 million. The ticket was claimed on , by 100 cheese factory workers; all but one chose the cash option. Cheese is located in and many of the factory workers live in the tiny community of . Another group of Sargento employees also won a $10,000 prize in August 2007. 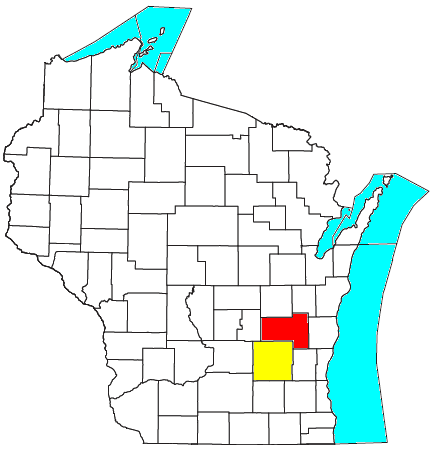 thumb|right|300px|Location of the Fond du Lac-Beaver Dam CSA and its components:

There were 16,638 households out of which 30.6% had children under the age of 18 living with them, 48.4% were married couples living together, 9.8% had a female householder with no husband present, and 38.2% were non-families. 30.9% of all households were made up of individuals and 12.5% had someone living alone who was 65 years of age or older. The average household size was 2.38 and the average family size was 3.00.

:"See also: "
*, general, ,
*, Chicago disc jockey on -FM
*, guard for the of the NBA
*, American Oil Tycoon.
*, first person known to have been successfully treated for without receiving a vaccine.
*, former
*, current Republican member of the for the 6th District of
*, retired center for and of the .
*, professional fighter in the